With the recent rise of Freely Talking About Your D&D Character the internet has seen in what I’m going to assume is probably the fault of some extremely successful podcaster or whatever, I’ve been seeing a lot of talk about tieflings, and I want to present to you a take on tieflings I don’t see widely represented.

First things first: What’s a tiefling? It depends on the setting (as with all things), but the basics are that a tiefling is a type of human with a bit of demon blood. There are some creatures in most settings – most notably the Tannaruk and Fey’Ri in the Forgotten Realms that show that it’s specifically humans with a tinge of demonic blood in them. In some settings, the Tiefling are a bit like a rarity amongst humans – a Tiefling is born in a human line because a bit of the demonic influence in the family comes to the surface.

There’s often, in those settings, a similar type of creature that relates to celestial interference or elementals – the aasimar who bear a bit of the celestial, and the genasi with the elemental. And if you go down this rabbit hole you’ll find the Zenythri and the Chaond and all sorts of fun stuff, but Tieflings are the rockstars of this set. The Tieflings are the ones who you’ll often see alone, without the rest of the planar-cosmology-filling goofiness of the adjacent cultures. 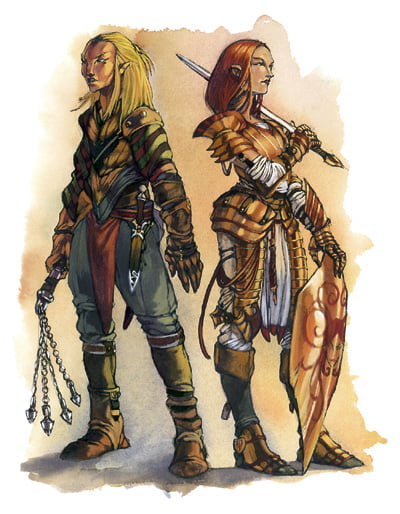 The Tiefling is almost obviously exciting, though. I mean, it’s a person with a demonic tinge to them, a little bit of the outsider, a little bit wild. It’s very appealing to an edgelord dork boy demographic, and certainly appealing to the monster-fucker genre of consumer, too. The tiefling, however, is also going to appeal to the fans of Hot Monsters as a voice of queerness, and that means you’re going to see a lot of people who are very happy to make leather-pants-wearing horned, tailed, spicy bisexual hot messes, and make their characters all about being a blatant metaphor for queerness. They’re a child born into a family that immediately recoils from them with horror, hides them away, and ostracizes them for their disruption of ‘the normal.’

This is very basic queer coding, after all.

I personally don’t like it? Partly because the nature of queerness is that you don’t get born with queer horns on your head. Your queerness is a part of your identity that isn’t branded on you from birth and most importantly, being queer isn’t bad. A demon child that has actual special powers as an emblem of queerness really gets on my nerves because it kind of isolates the idea of queerness as both defined by birth (which it’s not) and monstrous (which it isn’t).

Every time I bring this up, though, it’s inevitable that someone will explain to me, helpfully, that queerness and monsters in media are often linked, and often queer people will identify with monstrous characters. This is very helpful because it’s definitely not something I’m already talking about and am already extremely well-aware of.

I’m not trying to take away your fun!

I just have my own preference.

I’d like to lead you to this other idea, though.

Tieflings have special abilities. They have stuff other cultures can’t do. Claws and fangs, and a feeling of fire, a tail, horns, sometimes unique feats, whispers from the beyond, a secret from a demon patron, a whole host of things. The tiefling is, mechanically, set apart from the human culture. As to why, well, there’s no real hard proof of where they came from.

Sometimes there’s stories of wars with planar invaders, sometimes it’s more that tieflings are byproducts of long-gone old sins. I like the 4th Edition D&D idea best, though. It presents the Tieflings as having been once the dominant culture in the world, with a super-powered magical empire that they then messed up so badly they not only cast a culture-wide sudo rm -rf / but also did it in a way that left every other culture very aware of what they did. They were humans who collaborated with demons and it changed them from being humans, and then, mixed in amongst human culture, there are these people, these tieflings, who have some of that ancient demonic heritage and powers just there, in them.

To this story, the Tieflings are the children of an empire that is no more and what defines their place in their current culture is that everyone around them is very aware of their relationship to that culture.

In this case, the Tiefling are both victims of empire, adrift colonists with no culture of their own, and beneficiaries, with all the old power that resides at their fingertips waiting for the tieflings to go get it… but that same power can be measured in terms of the peril it can cause the world. You may be saving the world, by turning these tools of global domination against themselves, but doing so comes at a cost.

This, this to me is interesting. It connects you to something monstrous, something big and something that you have every reason to resent as an individual. It draws the player’s relationship to their own potential power not as the invigorating power of gayness but of a question of how to deconstruct a master’s house.

That’s a question that often requires you to look for the master’s hammers.