Here’s a link to the first part. I said I had to go to the tank for this one, and boy didn’t I.

When you want to design a game that conveys a narrative without writing that narrative, and when you accept that all games tell stories, you’re left with a need to construct your game’s components so that they’re made up of potential events, or perhaps better expressed, you’re made up of story components.

One of the things that games tend to have that works well for them is the start of the game, the engagement of the player, is a singular instigatory action; the players’ presence change the status quo of the game’s universe before the player arrived. Now, most of the time the game’s narrative doesn’t incorporate that – most games tend to start from a place where nobody has done anything yet, and the game follows that.

That’s sort of all you need: You need the game’s mechanics to represent the movements, actions or reactions of people. People is a nebulous term, by the way: humans will see people in everything around them. It’s actually really hard to keep people from attaching humanity to the things in the games they play – how often do you see people treat the dice like they have motivation?

The trick then comes in making sure that players can all see the same things as having some degree of personality, of agency to them, something that forms the story around them. And to show the example of how this works, we’re going to look at two great games, with similar mechanics and a complete disconnect between the nature of how they tell story. 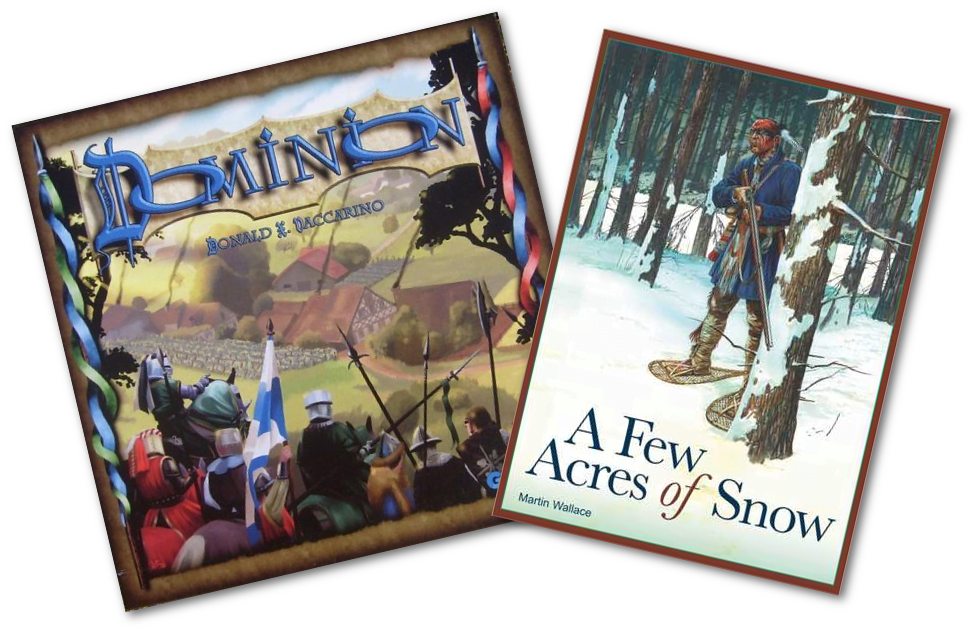 First we have Dominion, the game I tease as being themeless, and A Few Acres of Snow, a game about the invasion of Canada by America in that war they don’t like to talk about. Both games are deck builders, and both games have some pretty simple mechanics that they then expand outwards.

In Dominion cards are bought from a grid, and there’s a sort of variance in what the cards are, with a very vague idea that you are a ruler, or maybe you are the territory itself, with your deck representing things that exist on your territory.

None of these are bad game entities, but when you lay them out, there’s no clear idea for what they all are. Are you building a throne? What do you mean when you have two thrones? Does a blacksmith turning a metal coin into a different metal coin represent something like an actual act of alchemy? There’s no clear explanation, no solid or robust theming. The game has a theme alright, an overtone – it’s one of a sort-of-medieval sort-of-fantasy kingdom, with something like a government, but that’s all.

In A Few Acres Of Snow…

In Acres, the cards represent the actions you as a ruler of the war can take, the actions you can engage with and the ways you can direct troops with a limited range of options – sometimes supplies just don’t show up when you need them, sometimes you have the chance to communicate with three or four cities and don’t have the supplies to direct to them. The mechanisms of that game put the player in the narrative position of a leader dealing with the constraints of a military movement during a time before instant-speed communication.

What this means is that the mechanics of the game become part of the story the game tells you: You’re a leader, you’re making choices, they are all based on communication, and the cards that represent people are people dealing with you and talking to you, people available to you within your limited sphere of communication. One of the best cards in the game for this is the governor – a character that when you buy it, comes into your deck, gets rid of two cards you don’t need any more… and then remains there until you get rid of them with another governor – meaning that over time you can have a deck full of governors, managing beaurocracy, meaning your personal communication is now clogged with fewer bad options but with more dealing with beaurocracy.

The difference between these two games telling stories is that the games’ mechanics require you to change your mental position on what the card entities are pulling your focus to. In Acres, the cards represent opportunities presented to the player, to you. In Dominion, the cards represent things within the player’s space. That’s what keeps Dominion from telling its story; the character cannot be the player, the centerpiece cannot be a thing on the cards.