Today, I wanted to try and finish a prototype of Adventure Town. One sit down session where I hustle my tuchus off and come out of it with something I can present like a real game designer. I honestly feel bad about how long it’s taken to make Adventure Town because part of the point of it was to make something I could hammer out in less than a month as a side-project and distribute freely to my Patreon sponsors as a purely digital product.

Still, what is experimentation if not for the experiment!

Nonetheless, progress. I sat down and tried to think about what more I needed to finish Adventure Town’s first printing. The systems are all in place, really, for what I consider a ‘basic run’ of the game.

The system of Adventure Town is a little bit like a sort of Machi Koro like game. You buy parts of the town, and then adventurers come to town, spend their money, and the businesses in town react to those adventurers. They’ll give you money, or prestige, or maybe they’ll work on your personal quests.

There’s the common sheet, your personal sheet, and then the game has dice and cards. The idea is that for a print and play game, the cards are easily made and reused for each game, and there aren’t many of them – maybe 25 or so.

These cards are all meant to represent adventurers that come to the town at the end of each turn, and that means the card space is going to feature some visual stuff, a picture of the adventurer so that people can focus on that character and know when they show up. So, ideally, they want to be pretty diverse and distinct from one another.

This means the game is built between three different aesthetic spots: The board, the cards, and the player boards, and now…

Now I have a problem.

I don’t want to spend a ton of money or time on Adventure Town. I have some art assets I can use already, and now I’m wondering if I should use existing art assets. With that in mind, I’m going to ask my Patreon subscribers for more specific opinions, but the basics are am I going to use the art of FinalbossBlues, which is pixelly, and make the game more like running a JRPG town, or will I use the ink art of the Terrible Character Portrait Pack? 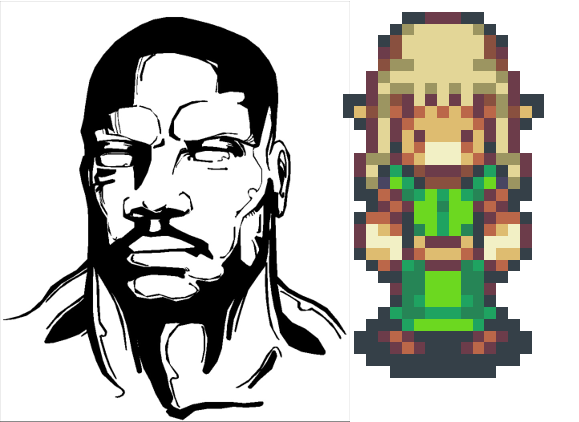 We’ll see how it goes!

We’re in what some people are calling a Golden Year for roll-and-write games, which is nice but I’m trying to not let what those games are doing influence me too much. Some of the things you can do with good production values include booklets that change one another, or sequential pages or rules changes, while I’m trying to make a game you can print out and conveniently.

Still, because I have free distribution and production costs (more or less) I can afford to give players a lot of options if making those options is relatively easy. And thus we come to my next thought – offering multiple town maps. The first thought was using cards to represent the town, but part of the point of this game design is to make it so players can draw on and deface the board itself. I was thinking I might want to allow – if the design allows for it – oddball things like being able to blow up or change rules on some locations.

But I’m getting distracted. The point is: Card based board is not an option. Especially because the point of the board is to be replaceable with a simple printing! We’ll talk more about alternate board stuff once I’ve printed out and played with some more boards!

In Adventure Town, you are all trying to invest in the buildings around your town, building them up to make this town more appealing and generate more money when adventurers pass through. Each turn, there’s a phase of dice rolling, representing economic activity and your own plans as a member of the area’s ruling groups. Then, adventurers pass through the town.

I’m not sure if adventurers pass through the town every turn, or if that’s triggered by dice events, too – and while your town is small, only one adventurer passes per round, growing as your town grows. The adventurers have wants or needs, and that means businesses that relate to those needs get more income, and that income benefits most the people who own those businesses.

Now the question from here is how much of anything does this need?

There are three basic values that will give all the rest of the math in this game shape. How many buildings are there? How many adventurer cards need to be, at minimum? How many types of trigger should there be?

We’re going to assume symmetrical distribution of each, by the way. Unequal distribution is good for games with fewer random elements, as they make the rarer incidents feel more wild; in this case, the dice are going to present a randomness for all players, and we don’t want people to be able to bank on long shots that then fail because the dice didn’t come up from them. I want choices to matter, and in this case that means trying to keep people from getting too far ahead with either lucky long-shots or unlucky crap-outs.

When you’re doing this kind of design, there really is no right or wrong place to start. I want the towns to be printable on an A4 sheet, which gives me a boundary to work within. I drew a few designs for the town as a 3×3 group of buildings, then a 4×4, then a 5×5, and a 6×6. 6×6 got a little small for my tastes as an A4 page, so a 5×5 it is. The central square is the town hall, which nobody owns, meaning we have 24 potential buildings.

With 24 buildings, what do we have that can divide into that equally? Well, one option is 24 adventurers that trigger each building uniquely. That’s a bit dull though – it means that once an adventurer triggers a building, you have to wait until that adventurer loops back around. You can’t have any ‘really good days’ when a building gets triggered once or twice in a turn. Also, do we want adventurers to only have one trigger symbol?

Working on the idea that all adventurers need one or two symbols, that we have 24 buildings, I went to this Combinatorics calculator, and jammed numbers in it for a while. If there are 6 symbols, which can be repeated and where the order doesn’t matter, and you pick 2, there are 21 combinations. 21 is a good number for a deck of cards – it’s not too small to shuffle nor is it too big to handle quickly, and it’s small enough I can add some cards to it if I want to.

That is how it’s done, by the way – how I do it, at least. I jam numbers into things to see how long it takes to work.

This has an additional possible application. If there are 6 symbols, and there are 6 faces on a die, it might be that people can spend a dice to trigger a symbol that corresponds to it. I don’t know if I’ll use that, but it’s an option!

Next time, we’ll talk about tools.

For this latest update on Adventure Town, let’s talk about the actual things you’re trying to roll. Unicode is nice and includes a set of die faces (⚀ ⚁ ⚂ ⚃ ⚄ ⚅) so we can use an ordinary text editor to sort out an example of our play boards.

You’re rolling dice to make your businesses and investments in the town do things which will give you money, which will in turn let you buy things to upgrade the town. Ownership of things in town gives way to complex rules, so the personal tableau should be as simple as I can make it.

Any given die roll in a d6 set is as likely as any other, so while we can construct a number of die roll setups, no matter how outlandish they look, they’re as probablistically likely as one another provided they want the same number of dice. Plus, it’s a drafting game – you roll 6 dice, you pick the ones you want, you use them.

Here’s an example, based on what I have in mind.

Let’s do a quick mechanical rundown of the ideas represented here:

This is where the player draws a symbol or signs a letter or makes a drawing that represents ‘their property.’ When they advance on the town board, they get to sign this symbol onto the properties they built, which also shows which buildings trigger at particular events.

I like this being something the player draws, it gives you some feeling of ownership on the space. We’ll have to decide what kind of space we want it drawn in later – like its shape and dimension.

These are simple cash ins: You can trade two dice of the sets type, and get a payout. Every time you get that payout, you put a cross in the box next to it, and that means some of them can run out. This feelsl ike things where the player is only so able to make money off things a certain time before the demand dries up.

Plans let you spend one (or more, depending on how many) dice you drafted to cross off die in the Plan list. Plans are more restrictive, in that:

This means that a player might roll a 3, decide they want to start on the third plan, and then can’t advance any more plans until they cash in a 4, then a 3 again to finish that plan. Plans make your other payouts better, though – both payouts for opportunities and triggered things from businesses. Consider these a way to earn XP when you want to do something with a die roll other than throw it away to the Old Crank in town (who will buy any die for 1 coin).

You can advance plans with as many or as few die at a time as you want, but it’s your whole turn; so if you draft a 5 and a 6, and only the 5 is useful to your active plan, you don’t get to cash in the 6 for money.

These are different, because quests are big cash payments. They might not even be cash – it might be that they give you another currency, like Quest Points, you can use to cash in for some specific buildings (like, say, a Wizards’ Tower or a Cathedral). Quests, like Plans can only be advanced one at a time, and need the exact next roll to advance.

Also, some adventurers will finish quests for people, based on what they’ve got.

I know one feature I want on this is a corruption row – a line of tickboxes that just give you 2 coins every time you hit them. You can use this to make money when you don’t like your die rolls, but excessive corruption can lead to bad effects, and some player boards might secretly punish you (or reward you) for excess corruption.

I saw this one winning the poll ahead of time so there’s been a bit of work on this idea from the getgo.