Something had to be this month’s anime (so as to just not overload the Story Pile with being about anime this year), so your choice was deniably gay boys or definitely trans girls, so spin the wheel and here we are.

I’m also going to talk about this series without any concern for spoilers. If you just want the general ‘hey, Talen, do you think I’d like Zombieland Saga?’ the response is ‘I mean kinda?’ It’s about as good as it looks. It’s completely unremarkable as an idol show, from what I can tell, the songs peak at ‘eh’ and there’s pretty much no compelling reason to watch it except as it relates to the inclusion of some fun Pride-related stuff. It’s available for free to watch on Crunchyroll.

I can’t just say ‘watch one episode and ditch on it’ because the cast largely doesn’t show up until episode three, and that’s when you’ll know if you care about the characters at all. 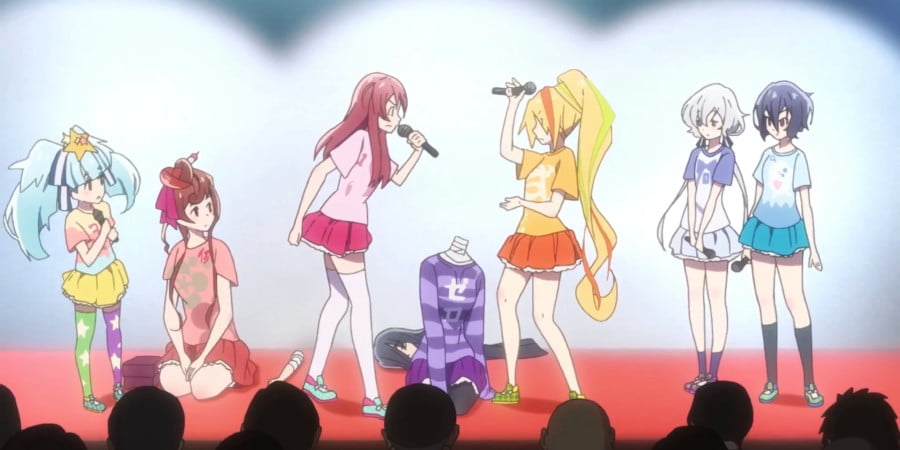 Zombieland Saga is a very-recent, as in it’s still airing its second season, anime. It’s an idol anime, which if you’re like me, you might kind of go ‘wait, what does that mean?’ and since anime is a movement full of these very heavily archetype-driven genres, that’s not that odd a question. Idol anime focus on the idea of a narrative built around duplicating the real world marketing exercise that is an idol singer group. Idol groups are basically like, a band, but … even more artificial. They’re part of like, this specific aesthetic group of performers, sculped by some form of marketing device. Idol groups are like, conventional visions of manufacted music groups with the cynicism dialed up to the nines.

I mean I am kinda talking smack here, but I’m also not saying anything untrue. Idol anime are narratives about the creation of these idol groups that are, themselves, probably the more wholesome version of them because they are stories that don’t include the abusive labour practices and all the creepy ways they have to behave in public. I’ve written about how creepy I find Love Live in the past, but the version of the idol world they present is it’s something girls want to do for a variety of their own motivations is better than, you know, the real world version of the same thing.

This isn’t to say hey, you, don’t like idols, just like, I can’t really latch onto their personalities without the looming specter of imagining them being bullied by the worst versions of my own experiences doing Choir in a christian cult.

Anyway, the good news is that if that sounds awful and you don’t necessarily want to watch a show about a cynical merchandising exercise that commodifies girls in their teen years and makes them live in regimented nun-like experiences while demanding they attain impossible social standards to make money and maybe hopefully guarantee future careers, this one’s not like that. After all, in this one, all the girls are dead! 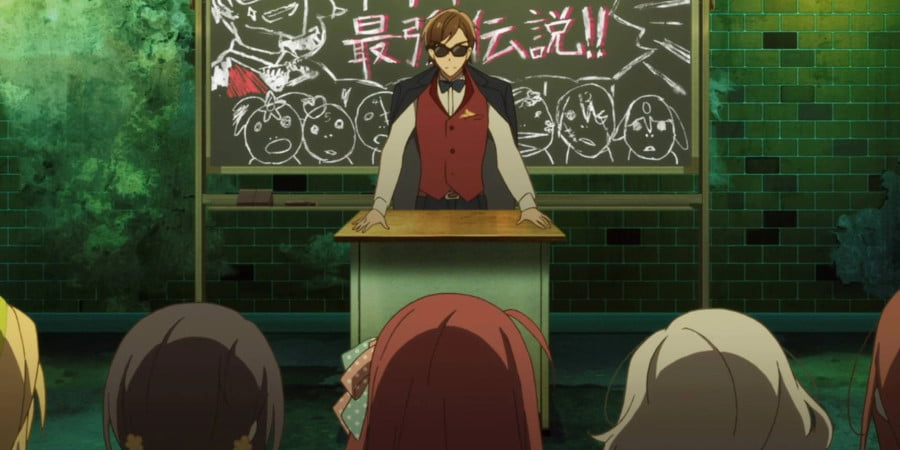 The premise of Zombieland Saga is kind of weirdly high concept and also awful and also very, very, deeply funny. See, there’s this dickhead and he can bring people back from the dead, with some of their memories and talents and abilities intact. Armed with this ability, he decides to resurrect a small number of women in varying levels of historical importance to make an idol group to ‘save’ Saga district of Japan, which is, it must be made clear, absolutely not in any danger of being destroyed. The whole framing of this character is that he’s doing something extraordinary and unnecessary, and motivations they eventually explore for him don’t really solve the whole ‘why are you raising the dead to make an idol group?’

The answer the series offers in the first season is ‘because he’s a massive weirdo.’ You can do some unpicking to look at the character a bit, and if you do take a long view it kind of gets worse; when he’s talking to people who aren’t in the band, he either takes on a snakelike seductiveness (of men or women) or he’s a stammering and unconfident nerd. The upshot is the implication that this guy made himself an idol group to have someone on hand to bully.

Still, it gives us an idol group of young women, raised from the dead across a variety of times to represent a history of different styles, in a host of idol numbers – one an episode – that are about building a band to reinvigorate the culture of Saga. They are all, in their own way interesting characters, and everyone gets a musical number, which…

One of them is a rap battle, which is pretty funny and has a nice beat, and culminates in yelling at old people they need to be fucking more.

One of them is mostly a reminder of how good One Night Carnival is.

And the rest are completely forgettable, middle of the road, came-with-the-frame music numbers. They are not bad, they are not good, they are present. In some cases they’re kind of insulting – like the way the metalheads cheer literally nothing the actual idols are bringing to the table but impressive headbanging is… kinda pathetic.

The raw comedy of the fact these characters are dead is also a big part of it? Like, the fact they’re zombies and they’re unkillable lets them do a lot of exaggerated physical follow through on their slapstick interactions with flying heads and missing limbs? That’s kind of neat.

Why then am I bothering to do an article on this series, though? 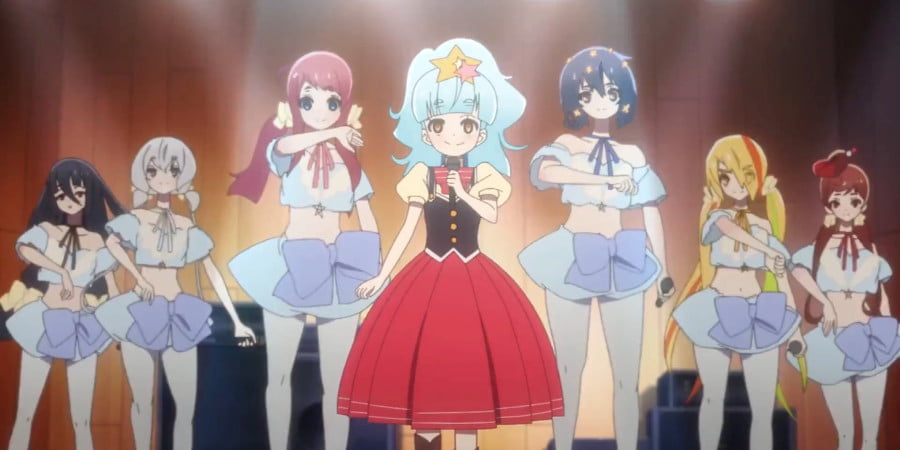 Lily, as the story presents her, is a trans girl. I don’t know the specific words Japanese uses to refer to her, but this isn’t something the story skirts around and uses artful language for. Lily got her start as a performer taking on female roles (not a particualrly abnormal thing), and when confronted with the way her body might ‘turn male’ after a certain point, is so horrified by this and a lack of support from her father that she drops dead on the spot.

She then later on confirms that she is not ‘really a boy,’ she’s a girl, and she’s Lily, she’s not that old identity. Like, that’s it, it’s 100% unambiguous. This isn’t a situation where a character crossdresses and we spent twenty years arguing about if they didn’t react negatively enough. They do an entire episode about it, and it’s handled in a reasonably sweet way, when you can set aside that this is a story about how she died young and has to avoid her father who loves and misses her, as he tries to apologise… yeah it’s sweet.

I like this series but if you ask me for reasons to recommend it, I’m going to be able to provide you with nothing. It’s cute and it has a totally nice trans girl narrative that doesn’t make me feel cautious about recommending it.

You know, aside from the idol and the bullying and the general mehness.

But that’s part of the charm of it. This isn’t a remarkable series. It’s just a nice series where one of the characters is a trans girl, and it’s funny and charming and it doesn’t have to be remarkable in that space.