Volcano is from 1979, one year after Son of a Son, and while it still has that gulfy musical style Jimmy likes, and a real beachy theme and sound to it, it’s an album that’s showing perhaps some of the signs of touring. It has two of Jimmy’s ‘big 8’ songs – songs that get played at every concert – and one of them’s pretty good! 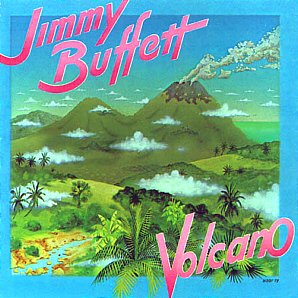 Volcano wasn’t well-received by critics, which shows that 1970s music critics were idiots. They disliked Volcano and liked Son of a Son of a Sailor, so, like I said: idiots.

Volcano is the first album Jimmy made after the birth of his daughter Savannah, and in the country music industry, that’s almost always a death knell for albums full of songs about their cutest little nose or the sigh of a baby or the way the moon turns or whatever. Country songs from fresh dads tend to be a special genre of played-at-their-sweet-sixteen glurge, and I hate them. Despite that, though, Volcano dodges that (and the song in that genre that does show up shows up next year).

The two songs in the Big Eight here are Fins and Volcano. Volcano isn’t a remarkably good song, but it’s singable and fun. I can imagine there are people bothered by the dialect affect in the lyrics; it’s got that repeated line of ‘where I’m a gonna go,’ which sure, I can definitely imagine being uncomfortable.

The other one, Fins is a song I like a lot about how much it sucks having to exist in a space full of pushy, demanding assholes (the sharks of the song), but what I don’t like is the way that the fans seem to think the funny, relatable idea is to mimic shark fins with their hands. It’s like ‘oh hey, that song’s about a girl who’s constantly moving to avoid predatory things like responsibilities and exploitative people, and those things are represented by sharks, it me, i’m the shark.’

The remaining songs on the album, though, are pretty much all excellent. Chanson Pour Les Petits Enfants is a song for and about children, a children’s book of a story, and it’s something I’ve sung to many young person falling asleep. There’s some good, solid sailor-style stuff, some lady stuff, Lady I Can’t Explain is a love song about someone who seemingly, the singer likes, which you’d be surprised to hear is rare. Survive seems to speak of the strain of touring, and Dreamsicle is … well look it was the late 70s, and this dude absolutely was enjoying weed. I don’t know if it’s a good weed song, but it’s sure dreamlike.

With all that stuff aside, though, there’s Sending the Old Man Home, a heartbreaking song that – I kid you not – mostly reminds me of the ending of M*A*S*H. We used to listen to this album on the way to visit my aunt and uncle in Canberra, and when we were there, one really common thing was to watch two back-to-back episodes of M*A*S*H on Canberra TV in the afternoons. The narrative in my mind, of that finale, of that sadness of seeing a war end and people go home, but then the knowledge that everything that you built to sustain yourself being broken down, is a beautiful sadness. No-one wants to stay, but we’re sad to be going.

I think about that feeling a lot.

Finally, Boat Drinks is a great song about, once again, Jimmy Buffett dealing with going stir crazy and shooting his freezer. I like this song more than is probably reasonable, because at its core, it’s a guy who likes sunshine and boats being stuck in a closed circle in Boston with people he doesn’t like getting hammered repeatedly on fruity cocktails because they remind him of being not here. I can definitely click with the idea of having cabin fever even when you’re not stuck in a cabin.