I know it might have slipped your mind, but there was a Tomb Raider movie in 2018. 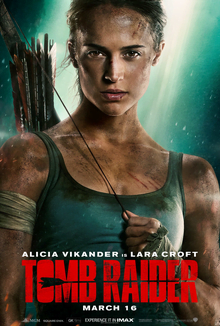 Tomb Raider is a movie about a young woman who I can’t remember because I watched this movie and the conclusion made me so fantastically, fantastically angry that I, wait, you know what, hang on, Wikipedia summary, that’ll help me out, Tomb Raider is a movie with the plot where a girl whose dad died works as a Working Class Poor (but don’t worry she’s a secret rich as soon as she’s done with her poverty tourism and will return to Rich Person status, but you know, got to milk that But I’m Basically Poor cred), then for some god damn reason she decides to complete his legacy and in so doing goes through a variety of death defying things that surprisingly, do not actually result from anything she chooses to do in any meaningful way but are just consequences of greater instances of her insistence to try and be near the important plot things as they happen culminating in the eventual discovery of the supernatural (but not really) until she flees from what I’m pretty confident is a tomb, and her name is…

This movie’s bad. There’s a lot of dismantling and deconstruction you can do on how this movie was badly made, but it’s also just not a movie that’s worth treating to that kind of scrutiny. You could learn lessons from taking this movie apart, but the main lessons you’d learn is just a festival of things to not do competently and you’d be a lot better off, say, learning that from good movies.

There’s this particular attempt to ‘redeem’ Lara Croft which seems to just produce crap. I don’t seem to think that I know the reason, or have some insight into the soul of this incredibly boring, badly executed media franchise, but I will say that it’s strange that Tomb Raider stuff has largely been better and more functionally complete when it was stupid as hell.

The preboot Tomb Raider games featured inside-out meat spiders, skateboarding supervillains, an evil clone, giant octopi in ancient tombs somehow still alive and thor’s actual motherfucking hammer, and while those games were rarely high-calibre blockbuster games of their type, they could be made and make profit. The inevitable brain virus of capitalism, where well why do we have this well-loved and venerated property if we’re not making all the money with it kicked in, and she got mobile games and relaunches and revamps and then she got a reboot which I wasn’t… really satisfied with either, and which looks worse the further it is in my rear view mirror.

This movie wants to be based on that game’s narrative, but also, somehow, use less of the story that was actually kind of cool? Like, this movie was presented with an opportunity to use the giant samurai zombies and the rivers of blood and it decided not to do it?

This movie spends its establishing time seemingly making sure that Lara is a loser; she’s poor, she’s not that good at fighting even though she has abs for days, she’s doing a bad job and the first action sequence is literally her playing prey to a bunch of cocky boys, and it’s interrupted by her having a PTSD flashback and getting hit by a cop car.

It’s like there’s this big dial designed to represent a character on a linear scale of ‘mary sueness’ and they keep adjusting the dial back, back, back, in case you accidentally think that Lara Croft, who is again, an internationally travelling archaeologist who shot a t-rex in the face and beat a skateboarder with thor’s hammer, is too cool and it strains your sense of disbelief.

What’s so hard about just making her a preposterous larger-than-life super-badass? Why not make a story of high camp and the unnecessary? Why are you trying to redeem Lara Croft from being silly when being silly was the root of her charm?

I think when you approach Lara Croft, there’s this vision of the character as product. It’s not an approach that tends to work well, because it means rather than approaching Lara Croft with a specific ideology and position on her, you instead either create another character who has very little to do with her or, you create four or five chunks of sorta character that may be related to one another. Rihanna Pratchett’s original description of her Lara from the Tomb Raider treatment sounds like the former, the character we’ve gotten since is very much the latter, and neither of them feel like they’re Lara Croft. I think that Pratchett’s Lara would be an amazing character to be LARA CROFT JR, a young woman from the 2010s that has to live up to the preposterous reputation of her 90s mum, so that way you get a clear break and you can shape the continuity in new ways? But they’re not doing that. They have to make More Lara Croft.

I feel like there’s an attempt to make Lara Croft media, where some executive has written on a whiteboard FEMINIST? in one circle and BOOBIES? in another circle and has drawn an empty circle in the middle with a ???.

I guess I should mention the one thing in this movie that sticks with me, the one thing that makes me really, really angry. The very last scene in this movie, the stinger to the plot of conspiracy (which kinda has potential, but was not handled in a way that made me care at all), is Lara, now empowered to her mission to not raid tombs and instead, hunting the conspiracy her father was part of, goes to the gun salesman she dealt with earlier in the movie (hi Nick Frost, sorry you haven’t been in anything good I’ve seen since Hot Fuzz), and buys herself a pair of matching guns (which Wikipedia informs me are Heckler and Koch USPs, which are

Anyway, that’s, that’s it. That’s the thing that made me stunningly mad at this movie. I was bored for ninety minutes, then at the very end of the movie, after the movie was over, in a mid-credits sequence, the movie decided to say

Imagine if we’d made a movie that did the cool dumb shit.