Press Gang was a short British TV show from the late 80s and early 90s that centered around the running of a school-then-more Newspaper connected to a comprehensive school, a sort of state public school that doesn’t get choosy about who they take. It was the debut show for a guy called Steven Moffat, and if I’m being honest, the work of his I have the least contempt for.

The story had a really interesting cast of characters, including at least one girl who at the time projected industrial-strength lesbian, a teenage Thatcherite, and an American Bad Boy whose crimes seem to be limited to having Annoyed An Administrator at the school. Press Gang was compelling and it was emotional and it treated the experiences of its teenage cast as if the things they were doing were meaningfully difficult.

Moffat’s said, of Dr Who, that every episode has to be as good as a movie idea and there’s a lot of that to Press Gang. A young woman locked in a vault, trying to arrange her rescue with a broken phone. A hard-nosed woman running a slightly dodgy scam to keep her family together encounters a blackmailer willing to destroy it all. A storyteller and hacker infiltrating their computers back before widespread internet access, only to discover he’s a tetraplegic. A wrong phone number results in a love story that doesn’t pay off for a year. The storytelling of this show was, on the structural level, quite excellent, and it culminated in a final episode that was made to be Very Definitely Final,

There’s a tribe living by a river, and in the river there are crocodiles. The tribe has one particular piece of wisdom passed down through the generations. It goes like this: if you happen to meet a crocodile, don’t stick your head in its mouth.

The setup of There Are Crocodiles is pretty simple. Lynda Daye, our protagonist (I guess), is sitting in a quiet room, talking by a fireplace, to a mysterious other, about the story of the last days of the Gazette. She begins by telling a story – this story. The story of the tribe by the river.

What follows then is a sequence of people arriving at the Gazette in its last, low-population days, as the circulation of the paper runs down, since much of the crew has filtered away in the proceeding episodes of the series, to things like University or travel. The Gazette find a member of the staff, in the bathroom, catatonic from a drug overdose, and what ensues is Lynda in her typically commandeering way, covering up this (to keep it from destroying the Gazette), then watching as the coverup falls apart. The collapse leads to her demanding of the people around her explanations, accusations, and events from the past keep coming up. 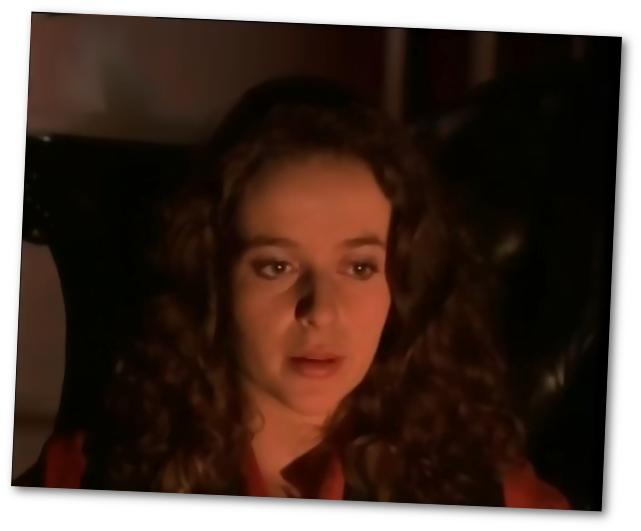 Eventually, she revisits the last time something emperilled the Gazette to that degree; an episode in the first season, called Monday-Tuesday. In that story, a young man named David ingratiated himself to the crew, did some work, and got kicked off the team. Armed with insider knowledge, he attempted to blackmail Lynda into making him a writer, a promotion well above his ability. She refused, and braced for the consequences. Instead of outing the paper, he killed himself.

And it’s David she’s talking to, in the room, with the fireplace, as she’s unconscious, as the Gazette burns around her.

Lynda rails against him, against his choice to die, against the drug addict in the staff toilets, and then, the story of Press Gang concludes on a cliffhanger that refuses to tell you if Lynda lived or died.

Every now and then – and who knows the reason – people ignore this advice. Which is sad. Because they die. But very stupid because they were warned. They had a choice. The moral of the story is this: you can’t afford to be stupid.

Lynda’s speech about choices and death was intense and harrowing to me. The sight of it, the dead-eyed into-the-fire look of a woman reciting this simple metaphor about crocodiles, as she underscored to me, a child years after the episode screened, thinking of justice and righteousness, and how you can’t suffer if you don’t sin… as she rejected that entire idea. As she spoke about the many ways the world ruins you even if you never do anything stupid, so you can’t afford to do anything stupid.

Looking back on it, it’s still powerful, though I don’t agree with its moral angle. Lynda is outraged at David and the unnamed staffer, because she sees their deaths as actions of their own choices (and to an extent, they were). It’s not a perfect speech by any extent – she speaks about drug use as most did back in the 90s, a thing people choose to do because they’re stupid and don’t think of the consequences. Yet despite it, she rages against them.

What makes her angry, what makes her sad about it is that even within this moral framework, she still cares. She still is sad that they died, she’s still traumatised by it, and part of why is because Lynda has spent the whole series as a hyper-controlling, dedicated and competent, ruthlessly proactive woman who viewed these things as her fault. It’s her one chance to tell the person that shot himself because he couldn’t blackmail her that he is the one who pulled the trigger.

Then, the show draws an arc. It talks about how all the things, the ‘adventures’ that she’s had, the no-nonsense bluff arrogance and energy that Lynda has had throughout the series, got sent into high gear after David’s death.

The story was not only serious enough to handle a suicide, but it also showed the way a character, feeling responsible for it, had that same suicide wreck her.

And so, the story ends.