It wasn’t intentional by any measure but it turns out, to my surprise, that I became a fan of anime through the introductory template of the Harem Anime. For me, it was, in my early anime watching days, just a natural part of how anime worked where you’d have a character, then four or five people who really wanted to jump them. It was literally something that I think of as foundational to anime, because I mean, I watched Ranma 1/2 and then Tenchi Muyo and at that point that was my lens for how I thought the whole genre worked, and therefore I assumed that say, Sailor Moon must have harem stuff over there where I wasn’t watching in the episodes I missed. As a result, I watched a lot of harem anime, and it took me a long time to realise that the dynamics of a harem anime weren’t universal. Like, I didn’t realise that you weren’t ‘supposed’ to ship every Slayers character with Lina Inverse and I was equally surprised when there was a definite end to the relationship tangle in Ranma 1/2.

This genre tends to boil down to one [TARGET AUDIENCE GENDER] with a set of [THREE OR MORE] [TARGET AUDIENCE INTEREST GENDER WITH SPECIFIC DETAIL]s that want to [COMICAL INNUENDO INVOLVING RIDICULOUS WORD]. The template is that simple, but harem anime in particular have a few complications that come from what’s not common to them. Specifically, if you have three characters who can’t choose between one another, then all you’re looking at is a love triangle and those are kinda easier to resolve and much more about a small number of characters who relate to one another. A harem anime is instead about watching one character as they interact with a group of other characters, and ideally, it has something else going on like a sci fi story or an adventure or a fight tournament or just goddamn anything that isn’t just ‘which characters will get it in the end’ or it tends to get boring. They also tend to mix in some gimmick with the girls, either to add interest to the narrative or to sound the sirens about the author’s personal fetish.

With that said, welcome to Quintessential Quintuplets, an anime about one dude with a set of five hot girls with giant racks that want to ride his baloney pony. And you know the twist of this one?

Wait, no, hold on, this is good, please, put down the broom! 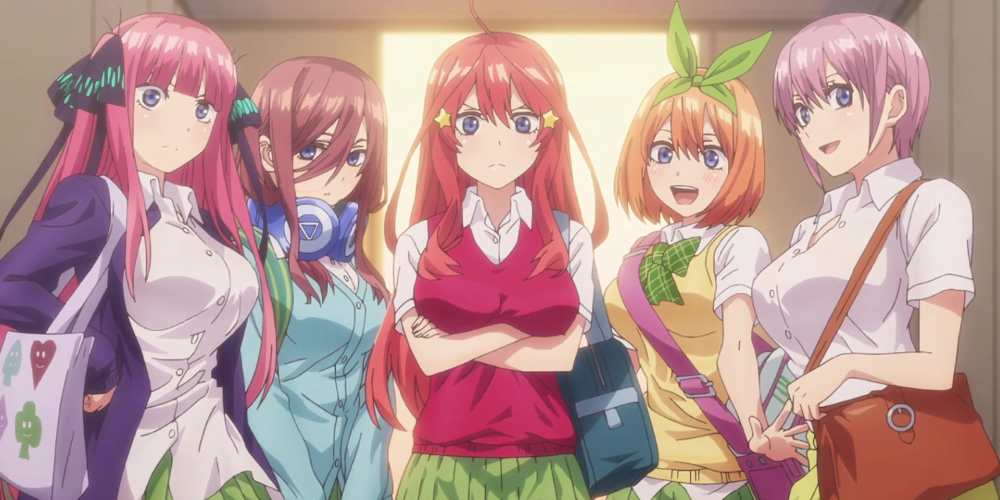 In Quintessential Quintuplets, an anime that makes me wish my personal style guide was more into abbreviations when I’m not doing couch gags, the central harem is five identical siblings with convenient number coded names and visual motifs; you have Ichika who wears a single earring, Nino who has two hair pieces, Miku wears headphones with triangles on them, Yotsuba’s hair ribbon is a four leaf clover, and Itsuki has hair clips that have five points on them. Also, they are complete dunderheads.

Oh, they’re not properly stupid or anything, they’re just all failing at school, and so, their rich dad hires a tutor from their school who can help bring their grades up to get them to graduate, and that’s your setup. One boy gets introduced into this dynamic with five people who are doing badly at school. They don’t want to do well at school, or rather, they don’t feel incentivised to engage with their studies, and what ensues is a long process of our protagonist trying to build a relationship with each girl at first as a student and tutor, then when that fails, as friends, and then that allows for the student and tutor relationship to build and then these girls, for varying reasons, each find themselves falling for him as they try to get passing grades on the way to the end of their last two years of high school.

Now, casting all these events in this light is that in the first episode you find the whole series is being told as a flashback on the tutor’s wedding day, and, you even see the bride, who, because she’s one of the identical quints,  can be shown, without necessarily being explicated. 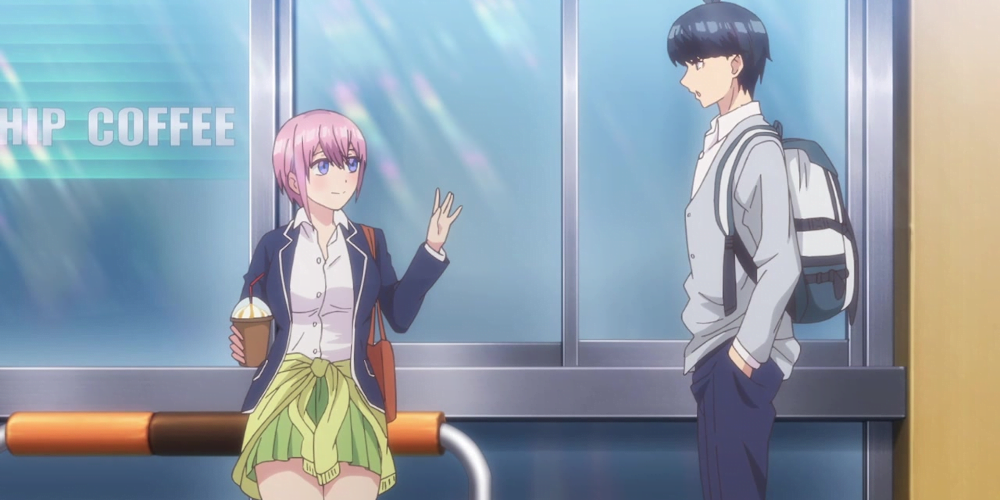 Okay, so it’s How I Met Your Mother, but with a more fixed time frame and with an explicitly limited audience. You can’t pair off the Quints with one another – don’t start with me, you know they’re not likely to do that – and there aren’t a lot of romantic rivals, which means this isn’t a question of who loses or how do you remove pieces strategically but rather instead where do these characters end up as they get to know one another?

As I’ve mentioned repeatedly this month, dudes are often the weak spot of a romantic comedy. Romantic comedy anime can have a lot of common weaknesses, and they aren’t an exception to this. While sure, there was the classic of Ranma 1/2 that kind of started a lot of the trends, since then in recent years, as the formula has been iterated on, the dudes in these anime get worn away, until the only thing that unites them are those things that as broad a possible otaku audience can appreciate in a non-threatening way. They aren’t important to the work, and indeed, it’s kind of important that they aren’t important. A dude in the centre of a harem anime who’s too hot or too interesting or capable of too many impressive feats that can’t be tied back to the interests of the audience risks alienating them. This is why you might find dudes who have flaws like ‘too hardworking’ or ‘too humble.’

In Quintessential Quintuplets, we have Fuutarou Uesugi, who amazes me by having reasonable reactions to things. Oh, there are some Comedy Harem Misunderstandings, which are in this case somewhat enabled by people actually lying to him, but generally speaking, as a character he has a clear motivating factor: 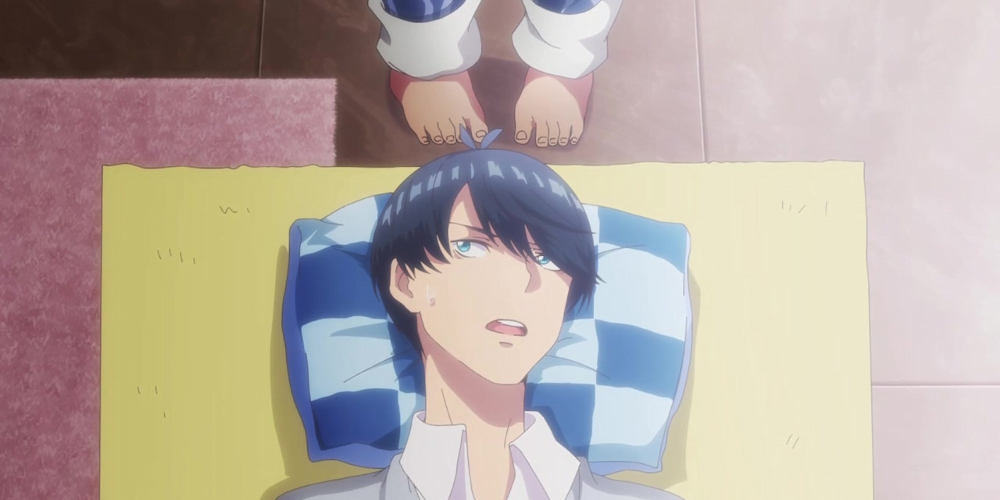 He’s not greedy, he’s poor, and his poverty has had direct and tangible impacts on his life and how he behaves. Some things he values highly are byproducts of his being too poor to have normally enjoyed them. Some things that scare the hell out of him are presented as a byproduct of experiencing long-term poverty. Hard working and extremely thrifty student? Because he’s really poor and waste scares him.

How sad is it in this harem genre that I’m basically saying ‘this protagonist is a reasonably relatable character with a sensible motivation?’ It’s not a good thing for the genre, but it’s still there. 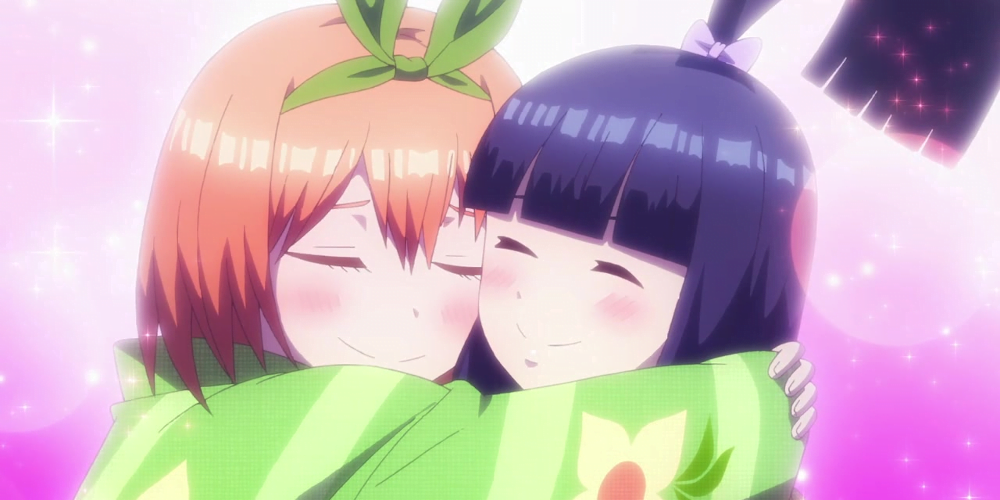 In the end, part of the thing with this anime is that it’s not just a romantic comedy puttering around the house. A number of anime in this genre put themselves in school so there are common stated things that will happen in school, but Quintessential Quintuplets has an inherent velocity to it. The narrative implies an end point and it implies the importance of factors along the way – there’s the school exam schedule, graduation, and then the implied wedding at some point afterwards.

The narrative is going to run out of stuff to do, and that means that you don’t just get this endless meandering around a would-be adventure. This one season is built with a respect to that velocity, and knowing this anime is built off a manga with a direct end, means I feel less like this is trying to milk its premise endlessly while it tries to monetise the audience.

What you get instead is kind of this very pure experience of enjoying a harem anime, without necessarily a specific conclusion in mind. Season 1 sets up the narrative, and lets you show the teasing, playful way the author constructs these scenarios where someone gets to be implied to be ‘the one girl he picks,’ even as the show makes it clear that it could be any one of them.

The thing is, for me, that’s enough? 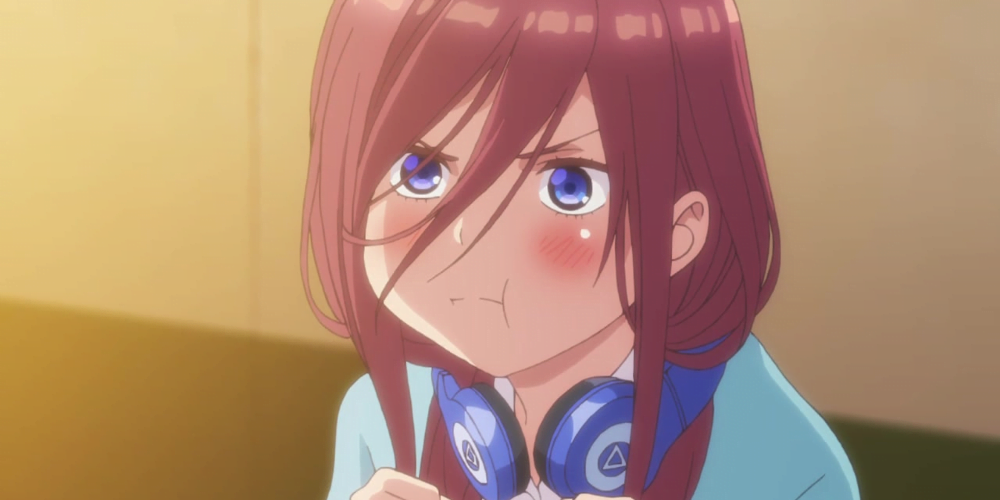 I really enjoyed Quintessential Quintuplets as a harem situation that stops with the metaphorical ball still in the air. You can imagine all sorts of conclusions to the narrative, and maybe they’d be better, but in the one season I got, I enjoyed what I got, and didn’t find myself thinking I needed it to end one way or another.

It is therefore, a media where I realise a large portion of my fondness for it is going to be paratextual – of seeing and partaking in the potential question of what if this character or what if these characters and that’s interesting. Literally, it’s something to play with. It feels like a great fanfiction bed, but also, I don’t feel like I do with a lot of other media in this space like I had to pull the ripcord to get out and avoid some sort of inevitable failure point when the author got weird or creepy or embarrassing. The characters feel whole and fleshed out, watching them interact is fun, and there are lots of different kinds of sweetness and comfort in the ways they interact, and the anime largely avoids a lot of deeply uncomfortable uh, shall we just say ‘anime bullshit?’

Note that I said lots of it.

Not all of it.

Oh, and each of the girls remind me of different people in my friends group, and therefore, they’re all great and wonderful and dumbasses.