The stories follow a pretty consistent pattern: Wombat gets an idea inspired by some passing fancy or local event, and tries to get involved, gets it all a bit wrong because he’s a bit stupid, the friends have a bit of a tiff because someone is being a jerk, and then they sort it out by communicating and forgiving one another for their very understandable limitations. They all go home and have lemonade, or a tea cake, or something.

It’s all very low-stakes high-emotion narrative, because it’s aimed at five year olds, but it has a sort of easygoing charm that makes it easy to enjoy as an older reader. Oh, the plots aren’t interesting, not in a truly complex way, but there’s a lot to be said about the way that the stories put weight on finding fault and blame – there’s a lot of effort put in the way the stories flow that the story seldom treats accidents or happenstance as a get out clause for a character being a dickhead to someone else. 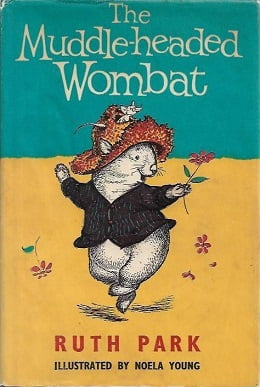 Iiiii love this character. I love the illustrations, I love the language, I love the charming simplicity of it all, and I love the way the stories breeze on by. I love the people who respond to this character by laughing and remembering his silly phrases or the way he fell about and kicked his fat little legs in the air. It’s so wombatty with Wombat’s stubbornness and his near indestructibility meaning that he’s not in danger of harm as much as he is in danger of upsetting someone or being upset. It’s a story full of feelings!

It’s also pretty comically anti-cop – when they show up, the police are figures of disdain, characters who are annoying, or misunderstand the situation, or don’t help anything at all. The assumption in this kid’s book is that police aren’t helpful, even though the characters are essentially a couple of rural kids dicking around with bikes. It also deserves some noteworthy praise for having Mouse, who is not a boy or a girl. Mouse is referred to usually without pronouns, and sometimes with the singular ‘it.’ The Wikipedia article genders mouse with she/her, but that’s not Mouse’s pronouns, and Wikipedia is wrong and sucks.

I read a handful of these books recently, and I did it as an exercise into a microphone, where I got to read the narrative aloud, and listen to Fox reading the character dialogue aloud. And that was where I was struck by how artfully sentences were crafted to be read aloud.

See, okay, look at the sentence The old man the boat. That sentence is completely sensible and makes sense, but your brain did a thing when you read it. The first time you read it, naturalistically, you’ll probably parse the sentence as being about an old man, and not about old people manning a boat – so when you say it aloud, you might emphasise it like ‘the old man the boat,’ and realise you’re in trouble. Rereading it, you can get it right easily but you do have to read it twice.

Wombat’s dialogue is riddled with mistakes, malapropisms and funny compound words, but they’re also ones where they never ambiguate the sentences that follow – you can just pick up the book and read his dialogue just fine and it will make sense, despite the oddness and the archaic structure. It’s super interesting, and I was going to write about that, and just leave it at that…

Except when setting up this article I did my due diligence to check dates and whatnot, and found to my surprise that yes: These books were absolutely written by people who wanted them read aloud.

See, the actual origin of the Muddle Headed Wombat is pretty weird. They started out as The Wide Awake Bunyip, and they started out as a radio program, for the children, on the wireless, back in 1941. When the actor for the Bunyip passed away, the show was restructured around a new main character, the eponymous wombat, and roles were created for different characters, using the staff already in the radio program. The whole arrangement was scripted by Ruth Park, who eventually went on to write the books, illustrated by Noela Young.

Famously, Park styled the wombat after her daughter expressed the dismay at the idea that she was stupid, and there was nobody in the world she could confidently say she was smarter than.

The Muddle-Headed Wombat books are a piece of classic Australian children’s fiction. They’re extremely old style and speak of an Australia that is no more, of pennies and photography booths, showing signs of their origin. They are by definition not timeless classics – these are media that were absolutely being made and enjoyed by boomers as they grew up. They don’t just show you when they’re from, but if you read them, you can get an inkling of what they were written for, and the way that the medium that delivered them shaped them.