Hey, look, alright, I know this may seem a bit weird to anyone out there who already watches and enjoys Mystery Science Theatre 3000, but I had to be introduced to this show after it stopped running and everything gets to be someone else’s first time. What do you want from me, I’m trying to spend this month focusing on media that’s family-shareable and isn’t going to be ruined by interrupting it for a meal.

First, to those people who are already into this kind of stuff: If you haven’t checked out The Gauntlet, aka Season 12, which is available on a variety of streaming services that are now all offering a one-month free trial in various locales, you absolutely should give it a shot. While you can talk about the charm of older episodes and a different time or energy in different arrangements of the cast, approached as its own thing, The Gauntlet showcases a variety of bad movies that are different enough to tell them apart and funny enough on their own without the (very good) comedians helping out.

Anyone who has no idea what I’m babbling about.

Mystery Science Theatre is a TV show that could not be more of its time if it tried. It was basically a show that served as a wrapper for movies, which mostly but not always showcased science fiction or fantasy movies. This is a thing that you’d see on television, back in the day, where schedules had to be determined well enough in advance that they could be printed in the newspapers (in Australia) or books (in America and other countries) that would show you what TV shows would be available to watch at various times. This schedule meant that you sometimes would get ‘shows’ that would curate other shows and show them, sometimes edited for time or content. They might have names like ‘masterpiece theatre’ or ‘the Afternoon Show’ or ‘Saturday Disney,’ or, in this case, Mystery Science Theatre 3000.

The basic structure was you’d have some people make a little bit of a show, then cut to show you some larger feature or other. They were cheap to make, if the bigger show they were making was cheap, and they could serve to do things like localise foreign material (like Saturday Disney and The Afternoon Show did here in Australia), or to pull an audience who might not check out a show based on its name without being informed why it’s special. These shows even tied into review culture, where you might be told ahead of time for things to watch out for or why you might have patience with work that might otherwise, uh, suck. 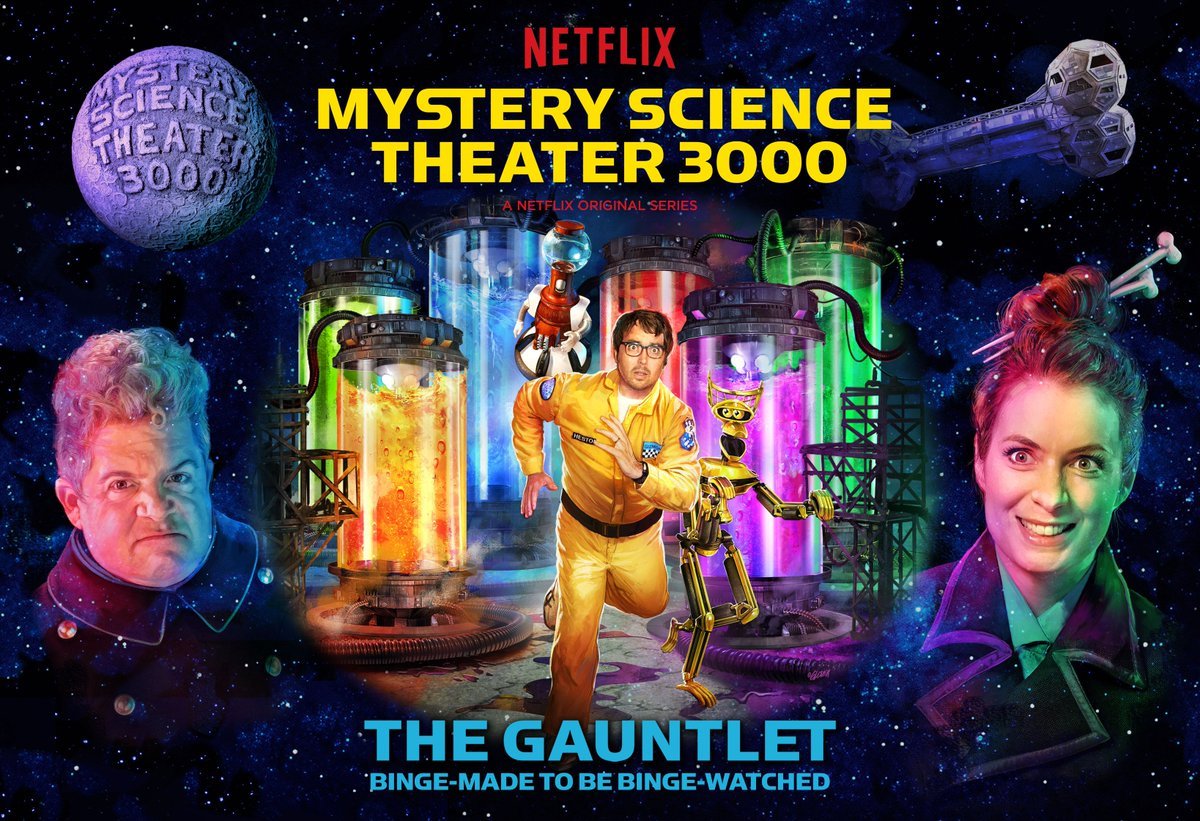 Mystery Science Theatre 3000 embraced the suck, licensing movies that were cheap as hell. Sometimes this was public domain movies, but often it was because they were using movies that nobody wanted to license because they were really bad, old creature features and horror garbage that had bombed badly and lived only in catalogues and embarrassing footnotes. It was cheap to license them, then use the ‘show’ you made around the show to, well, make fun of them.

I am not making this up, this is really a show that exists, and what makes this more amazing is that despite the fact that I know this series is made up of 90% garbage by volume, I have watched, I think, every single episode legally available to me, several that aren’t, and I’ve watched many of them twice.

This show is really funny, and there’s lots of it, which says a lot because the show was both very cheap to make but not free, and that meant that it got cancelled at least twice and rehabilitated at least three times. Technically, the show is thirty years old, but it didn’t run contiguously for all of that. It’s had rotating cast and writers, it’s had different hosts and puppets and this most recent pair of seasons have been made with a homage to the past in mind.

These new seasons are more streamlined, there’s less meandering, the production values are a bit better (not that the old special effects weren’t funny) and the movies have cleaner audio that’s more tolerable to listen to. They’re also timed a bit better, and they’re being made by people with a lot more experience watching and making them. Are they going to have the same spark of genius as earlier seasons? No, they won’t, and they won’t have the same kind of long running gags that take years to play out.

Still, The Gauntlet is better for binge watching, it’s clean and easy enough to enjoy, and if you get interrupted you’re not going to lose the thread of these incoherent, badly made movies to go get up and do something else. It’s great background watching, it’s long enough to last all day if you’re looking for something you can run at a party, and you’re not going to have to worry much about its content leaping out at anyone. Even the violent stuff is so goofy it’s hard to see it as anything but weird.

I really enjoyed the Gauntlet and if you’re looking for some long-form, reasonably low impact stuff to giggle at that’s resilient to interruptions, check it out, it might surprise you!