The followup to Margaritaville And Some Other Songs was, to me, one half of a two-disc set that my dad got and taped so we could listen to it in the car. It’s a very literal album – some very clear, explicit stories told in song form, not a lot of subtle metaphor. This album, while definitely Another Jimmy Buffett Album and having a song or two on it I really like, is relatively brainless.

It’s interesting, and infamously, Cheeseburger in Paradise is a weird classic of his, a song about… liking a cheeseburger. 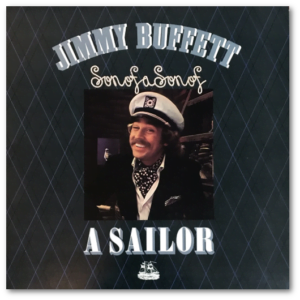 This album also has a yikesy bit – the way it talks about girls ‘out of high school’ in Livingstone Saturday Night is super creepy, complete with ‘fifteen will get ya twenty.’ It’s so egregious that in recent rerecordings, he’s actually changed the lyric in live performances to be less creepy (it’s replaced with a ‘group to the left of me, group to the right’).

I thought, at first, that this is the first Jimmy album where I really consciously think I’d be okay skipping it, until the time came to examine the second half of the album. It’s like Cheeseburger In Paradise is this pivot point where Jimmy goes ‘well I got your attention with the jailbait talk, let’s crush your feelings.

The back half of the album starts with Coast of Marseilles, aka, Margaritaville 2: This Time With Introspection. If Margaritaville is a song about a breakup where the singer spends their time drinking themselves into oblivion and only finally realising the problem, Coast of Marseilles is the same emotions without the alcohol, and the dreadful, haunting realisation that even if the singer’s not over it, the other person probably is.

Cowboy in the Jungle is a sort of broken down country song set in Panama, of someone who doesn’t fit in, dealing with the ways he doesn’t fit in, and how he’s going to change anything, in a place where people were quietly, regularly, going about their day. It’s like slowly boiling away a year of your life. Beautiful song. Haunting effect.

Mañana is a weird song because it’s so full of stuff that was very clearly was what was on Jimmy’s mind right now, a phenomenon that has been through most of these albums in a really sincere way (though again, whining about getting old in your twenties? Jesus). It’s this string of weird, specific references like to Steve Martin being on SNL, specific places in Florida, an orange juice joke, and right at the end, a jab at someone who mercifully, most people seem to have forgotten.

Anita Bryant is an anti-gay crusader from the 1970s. She sucked ass. You mght have heard of the ‘Save Our Children’ movement, and she was the head of it. She was the woooorst. And Jimmy hated her.

Then there’s the somewhat Yikesy ‘African Friend,’ which is mostly Yikesy only in that I’m pretty sure ‘African Friend’ in this case means ‘Black.’ It’s another story song. A single night in Haiti, a pair of gamblers from different parts of the world who have a good night, don’t lose all their money, and seemingly never see each other again. This is a nice song, but it’s just nice. Which, to be fair, is probably what you might need after Coast of Marseilles.