Disclosure: Someone I know worked for one of the companies that got Solo made. I don’t know the precise details and I don’t want to pry, but there you go. I don’t imagine they care that much if I think the movie is good or bad, and they haven’t spoken to me about the movie’s quality.

With that in mind, some bonafides up front: I am the Doesn’t Really Think That Much Of Star Wars guy. Not a ‘they were better when I was a kid’ guy or the ‘well this stuff lacks the depth of cinema veritate’ guy, but just someone who has for some reason or another never had that much of a high opinion of Star Wars as a franchise. I have had my fair share of Star Wars media – mostly in the form of videogames, books and my fill of watching the movies – so I am not ignorant of it, I just don’t really think it’s very interesting. It’s a bit like Monopoly – I understand that it has a deep cultural impact and lots of people are very familiar with it but I just don’t think it’s particularly good.

I guess the easiest way to explain what kind of Star Wars fan I am is that I think 90% of the movies are boring and the remaining 10% is all full of Ewoks.

Anyway, Solo is a movie seen as ‘controversial’ because Star Wars fans are just the worst kind of joke. There’s just the silliest kind of swirl of ridiculousness around this movie’s box office sales, conspiracy theories that are one step removed from saying ‘the Jews don’t want a movie about a strong white man to succeed!’ and there’s a lot of noise. Since it seemed Star Wars fans didn’t like it, I thought hey, maybe I should check it out. Maybe I’d like it, if it wasn’t something that appealed to the kind of people who thought Star Wars was good. Right? There’s a logic there, surely?

Anyway, I kind of love this awful movie, but I also kind of hate this great movie. 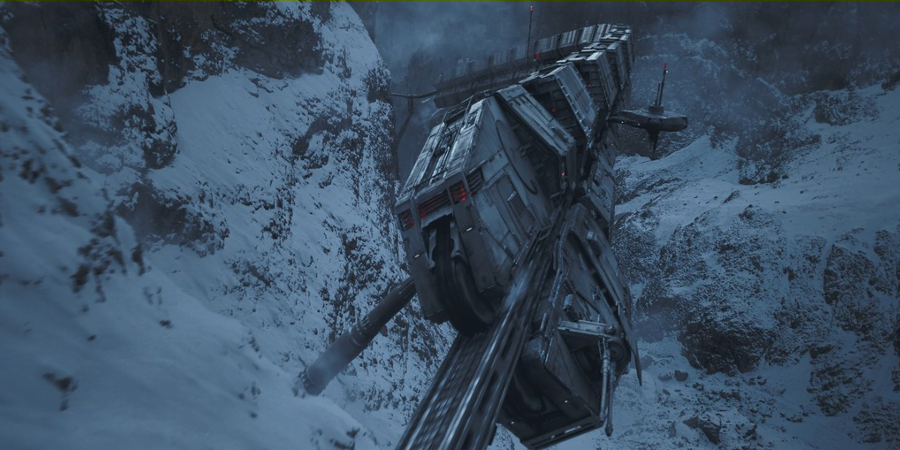 What you have here is a kind of origin story that’s trying to jam a few heists into it, or you have a classic heist-bigger-heist movie which is wrapped around the guts of a really boring and unnecessary backstory. The basics is that ya Boy grew up in a poor place, left without his Girl, and is committed to going back and rescuing her from poverty (because she wouldn’t do anything on her own without him, I guess), and the different bad ideas he tries to rescue her.

The Star Wars universe is this kinda beaten up, run down place that borrows a lot from the western and the war movie, but cooked until everything worth having is a bit battered, a little rusty. This story is both epic – spanning a character’s whole life (apparently) and very personal, mostly focused on the kind of person he wanted to be, and the kind of person his life left him the chance to become. That’s cool! That’s good!

And they’re not! They work great without this! And this works much better if it’s about some dude who wasn’t Han Solo! Maybe someone who we didn’t get to learn enough about in the original movies, whose arc wasn’t completed already? 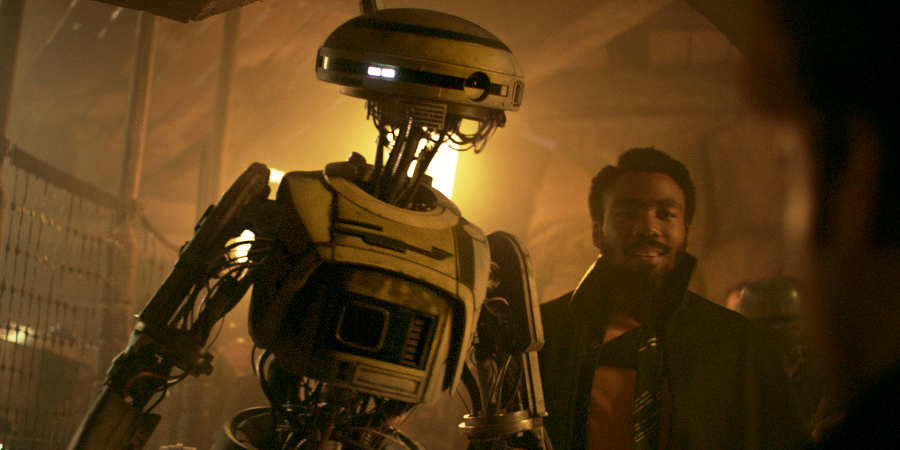 I really liked Lando, and I really liked his robot friend with caveats. The first caveat is that Lando is cool because he’s played by the incredibly charismatic and cool Donald Glover, which means I mostly spent my time watching him on screen thinking about the world that he was shaping around him. The way people treated him like he knew what he was doing, the moments of trust and the when that trust was disrupted with a grin. He was every bit the scoundrel that Other Guy was supposed to be, but Lando just stole the show, and whenever he reminded me he was playing a Star War character, and there was all this (huff) lore built around him, it diminished him.

His robot friend, l3-37, is a cool character with a great voice and a lot of enjoyable affect. She talks about revolution and overthrow of the oppressors and none of her peers take her seriously until they do and the result is great. I liked her a lot, except she exists in Star Wars and that means she relates to the rest of the Star Wars universe, which is a universe where someone builds maintenace drones to be able to feel pain in a way that makes them scream. Like, she’d be great in any sci fi story that wasn’t Star Wars, and her existence didn’t underscore all the, you know, heroic slavery.

Anyway, I like her, I like him, they deserve to be stars of this movie and for their place to have an impact, which they don’t, because when Solo is a Star Wars movie, it is a really bad movie. 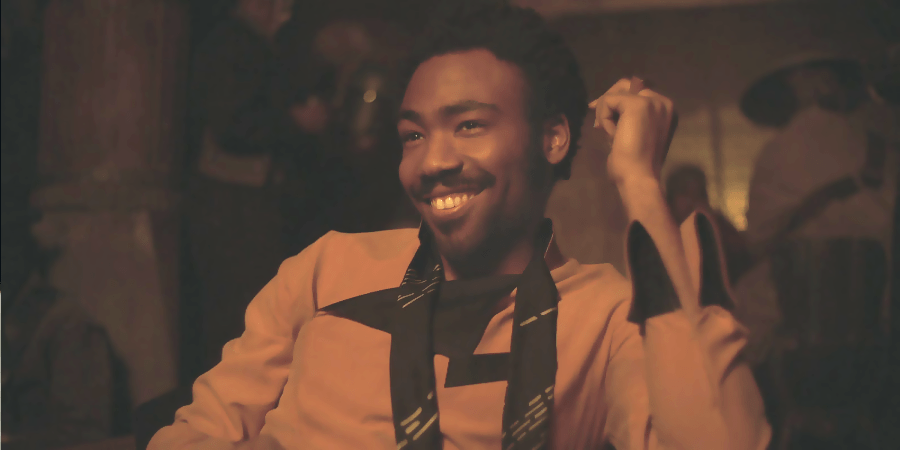 Alright, okay, so there’s the movie as a story in its own right, let’s talk about something that really angers me about this movie, specifically, and it’s a scene that doesn’t matter to anyone else in the world and probably shouldn’t, because it’s not very important.

They play sabacc in this movie. The scene is meant to convey tension, and be an interruption between the natural flow of the story for the viewer, and if you don’t think about games, or think about sabacc, or think about what the game is doing, this scene probably passes by you without a blip.

First things first, Sabacc is treated as Movie Poker; a game where people make bets based on hands, and then everyone reveals their hands and there’s no actual exchange of information or interplay. Our hero is shown as being good at the game because he gets the best hands, but Lando beats him by having a better hand (obtained unfairly). The thing that makes this extra frustrating is that Sabacc is a game that exists, you can just go and buy the rules, and they could have built this scene around showing a game of Sabacc being actually played.

Now am I expecting them to make the play of the game part of the story? WELL, YES, or at least make it so the game is in some way meaningfully explanatory of the characters. We don’t know if Lando or Han are pushing their luck, or communicating with one another, or playing chicken, or if this is literally just luck and people bet on it like it’s roulette. The game most obviously is built around looking like poker, but it does nothing to convey poker’s communication or planning or the way poker is about taking risks or understanding people, and ugh.

The thing that extra annoys me about this is I recently read a book about how back in the day, in theatre, games were used as parts of existing plays so both their random elements like rolls could influence the story, and their non-random elements (like the stacking of a deck) could give guidance to the players to always remember the way the game and story were meant to go. This is a movie made with so much money and wealth and effort and the result is a work that fails to meet the standards of storytelling technology five centuries old.

The game isn’t even able to do the normal job of a game in media, where you use the game to show these characters are on the same level because we have no idea how Sabacc works if you just watch the movie! 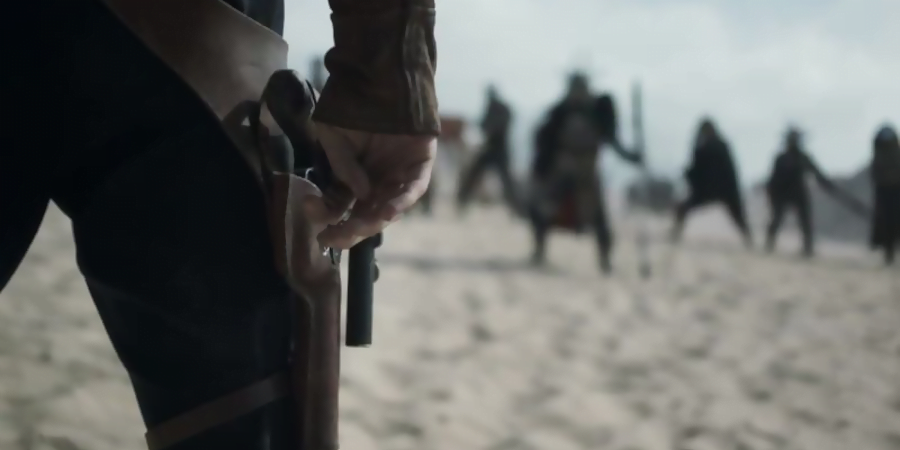 In the end, the bits of Solo that want to be a story about Han Solo, the Star War Character, are bad. They’re bad, because they’re filling in an unnecessary space and making this character who’s meant to be trying to do the right thing for the first time in his life into someone who has a history of doing the right thing. The bits that want to glad-hand you with the history of where his gun came from or the silly anti-Jedi martial art, or show you world building of Star Wars like it’s a world that make sense, those are all embarassing. When it tries to make a point about droid rights (hashtag droid rights), it means you have to think about this really silly setting of automated slaves and it weakens the work as a whole.

There’s this point in the opening, where someone says ‘beep-boop’ and thumbs a rock and the reaction to that moment made me laugh so hard and got me to sign up to watch the rest. The final escape in the ending of the story. The revolution, the cowboy style shootout, the sheer presence of those things and characters I was enjoying, that was all great stuff.

When they mentioned their names and I had to remember ‘oh, yeah, this guy’s… this guy’s Lando Calrissian,’ or ‘oh, wait, this is Star Wars,’ the movie got a lot worse. But smeared with all that degrading fanservice, there’s a really charming, fun movie about a goofy scoundrel who does the right thing for once, and I liked that.

But boy, this movie would be better if it wasn’t trying to make Star Wars fans happy.