When I resolved to not spend this month complaining about queer media I didn’t like, nor to subject myself to queer media in a form I knew I wouldn’t like, I didn’t realise how challenging that was going to make things since I didn’t have another Wynona Earp land in my lap. That meant going back through either movies I meant to comment on or movies I had commented on but never on the blog, and to my amazement, I found this. 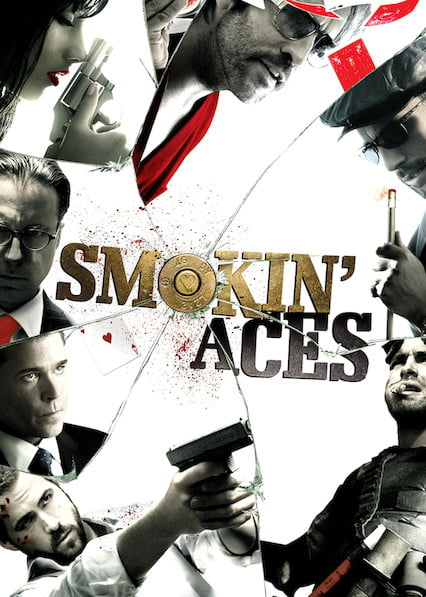 Smokin’ Aces is a straightforward crime story, and by straightforward I mean needlessly complicated and messy because everything that’s happening in it is happening all at once and you spend much of the movie trying very hard to work out just who is the protagonist of the story and who’s been deceiving you the whole way. It’s not a movie that has a lot of depth as much as it has a lot of surface, where you’re skidding around from weird thing to weird thing, comically over the top villains of a whole different strain, always just ricocheting off one another in an attempt to kill one person, and in the process, killing a lot of other people.

It’s about FBI corruption and about how law enforcement makes everything bad worse. It’s about how narcissism in the stage presence results in a person who is always lesser than the sum of their parts. It’s about how in the end, you can make a movie better by including neo nazis who are awful and get killed to death, very hard. It kills Ben Affleck off in the opening few minutes of the movie. Ryan Reynolds is there.

I’m talking about the movie in generalities, because much like the trailer for the movie, anything that shows you enough to handle will possibly run the risk of showing you too much. It’s like the action scene version of a jump scare – there’s almost always something cool and unexpected happening, and I don’t want to make those unexpected cool things expected cool things. What’s more, giving you names to get attached to is a fool’s game in this kind of collapse of a movie. This movie is full of kickass stuff, but it’s also all full of everyone sucking, dying, and losing. Really, you should look at people in terms of ‘I can’t wait until this asshole gets theirs.’

The only reason I bring it up this Pride month, in this blip of an article is that in all my digging, for my searching in general, casual representation of queer characters in media, this is one of the only action movies I’ve been able to see in my viewing history that had an incidental black gay couple. Things go badly for them, but also, things go bad for everyone.

This movie is a lot like a pop song; it’s extremely lightweight in terms of long-term feelings and it’s about a single hook more than anything of long-term, lasting quality.

But it’s a tight action movie, it’s lots of fun, and a nazi gets chainsawed through the chest.