East bound and down!
Loaded up and truckin’!
We’re gunna do what they say can’t be done!


Do you like extremely literal country music lyrics and preposterous displays in the name of appreciating really specific beer branding? Well, do I have a movie for you! 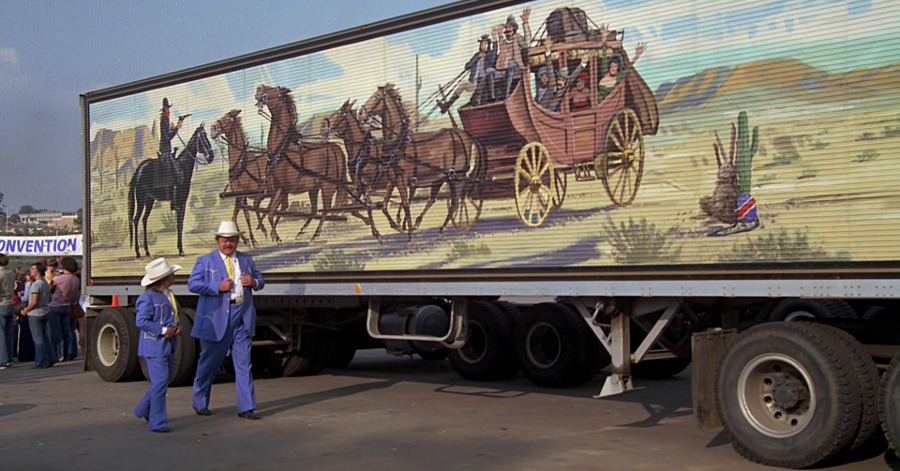 Plot? Well, two rich goons with nothing better to do commission Bo ‘Bandit’ Darville (Darville?) to bootleg some quantity of beer across state lines to some arbitary goal or whatever. Bandit grabs his friend, Snowman, and the pair drive off to acquire the beer and then evade police attention to their truck full of illegitimate goods with a fast sports car.

Along the way, the B plot shows up, where a runaway bride escaping from an ill-thought-out wedding winds up getting into Bandit’s car, and in so doing, becomes the focus of Buford T Justice, a small town sheriff. Justice is the father of the would-be groom, and he’s just the worst kind of cop, a small town law official who is 100% convinced of his own self importance. He sees leaving his son at the altar as a personal offense, and imagines a conspiracy to justify it, and so the chase is on.

It’s pretty good as far as basic story mechanisms go. Most of the time, cops aren’t going to engage in truly ridiculous stunts to try and catch a souped up sports car (it’s not safe, they should just radio ahead and set up blocks), and juridstiction means they’re largely not going to have the means to chase anyone for a particularly long period of time across highways. That’s kind of the point of the blocker car – by getting attention of cops (then losing them), the cops aren’t there to check the truck moving the beer. Buford serves the story by making someone who can keep the pursuit going, give you some sense of continuity.

That, by the way, is one of the problems with this movie: At the end, Bandit respects Buford’s tenacity. Except there’s nothing about Buford to respect. He’s just a stubborn, awful human. At every turn to show you something of his personality, the story introduces new ways for him to be awful. It’s great to watch the chunk of the movie that’s about watching this self-important cop getting clowned on by our funloving community of outlaws, but the end point of trying to go ‘ah, my worthy opponent’ is the wooooorst. 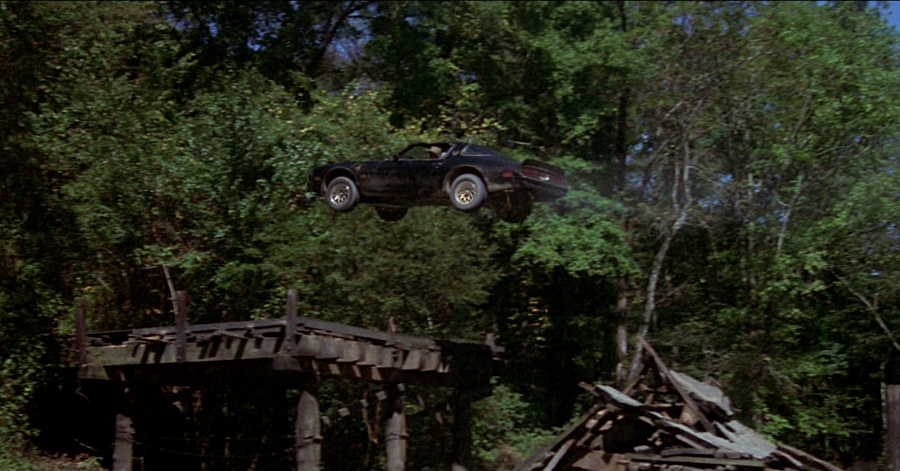 There’s something charming about the way this movie is all built around actual objects and spaces. It references real towns and locations, and that means that every year, fans of Smokey and the Bandit can get together and pile into cars and actually do the drive, and before his death, Burt Reynolds even attended some of them.

It’s a movie about cars and chases, and it’s from the 1970s, so that means a lot of what you see is some variety of practical effect. Documentaries have been made about the making of Smokey and The Bandit, a movie that features things like high-speed semi trailer stunts, car destruction, driving across a seemingly occupied football field, and infamously, bridge jumping. In the road trip re-enactments of the Bandit Run, there’s even re-enactments of it!

I understand the cars are real cars and the movie even got its start as an advertising vehicle for various things, and it tapped into the very real CB Radio ‘craze’ of the 1970s. It’s so weird to imagine that was a craze, like for a few years people were using CB Radios a lot, and then not. This means you get to see a whole range of random, one-shot characters who are all people who would have been on the CB network already. This gives us an additional secondary cast of characters that includes women! Holy mackarel, it’s a 70s action movie with women in it and there’s only one goodnatured sex worker! 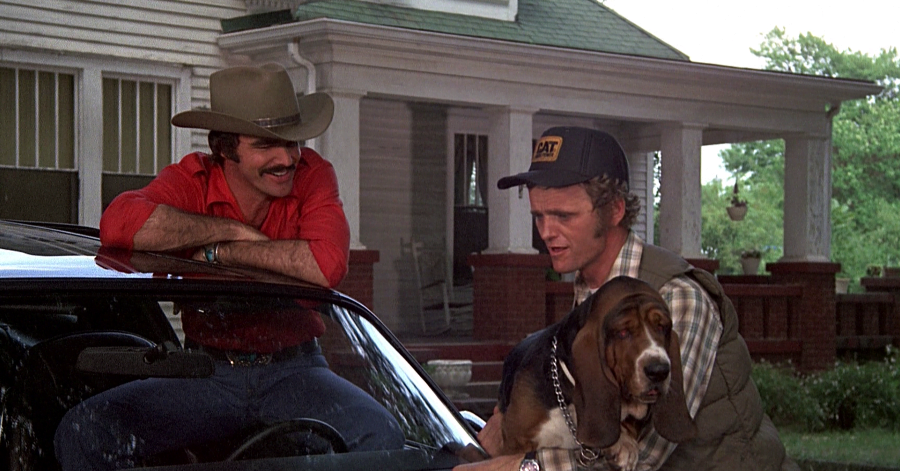 It’s almost like a skit comedy, where you have a bunch of little scenes of these characters showing up, chiming in to the main plot, then there’s a punchline where they leave. And it’s only funnier when you remember just how much of CB Radio dialogue wound up being about gay phone sex.

The movie is still a pressure cooker road trip, and that road trip is spent hanging around the four major characters. Setting aside Buford T Justice (who’s the wooooooorst), that means you’re going for a drive with Bandit, Snowman, and Frog. The CB Radio moments, as mentioned, are fun, and they’re often fun because they have about ten seconds to convey to you a character and a situation.

As far as characters go, well, I mean, Burt Reynolds is charming in a douchey way, Frog reacts well to all the stuff happening that she doesn’t already know, and that means you get to watch someone really cool doing cool things and someone more normal treating that cool thing like it’s as exciting as it should be. Snow puts some spin on things as the not-cool guy who’s best friends with a cool guy, and if you can hang out with a pair of mid-thirties or forty year olds as they proceed to commit a crime that also looks a lot like a blue-collar job. 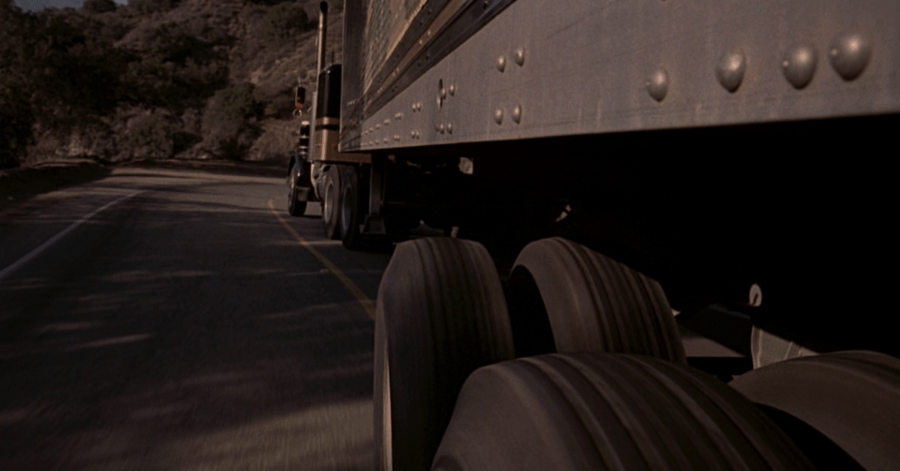 Of course, this is a movie from 1977, and there sure is some stuff that hasn’t weathered the years well. Particularly, you remember how I said that women show up in all sorts of incidental spaces, that this culture of ‘the road’ is shown as being not just a space for men and boys, but also women? Yeah, women get mentioned and even get to speak, but they’re uh.

They range from ‘sex worker’ to ‘enthusiastic idiot noob,’ and there’s an exchange riiight at the end about how guys in trucks would perv on women as they drove past, and the whole exchange feels really creepy, in part because of how the language has moved on just enough that it doesn’t make sense any more. It’s barely a moment, and it, you know, it just sucks as our hero and his salvation reminisce about ogling random unaware women.

It’s also rough when you watch Bandit interacting with anyone aside from Cletus and eventually Frog – even Frog. Hell, with Frog he’s pretty gross from time to time, and we have to account for the idea that this was common lexicon for people in the 1970s who were into each other. There’s probably a lot of signalling the camera doesn’t catch well, the way that these two people in a closed space are indicating interest to one another. 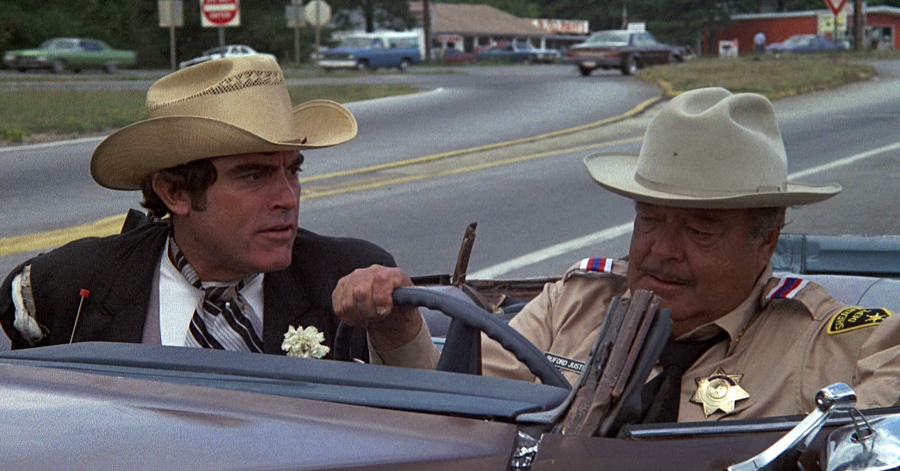 This movie is not something that I’d have ever gotten into, myself. I’m not into cars or road trips or trucks and Burt Reynolds may be extremely cool if you knew who he was, but for my entire life he’s been a retro fixture. I think the first thing I saw him in that came out after this movie was Saints Row 3. And I’m not going to recognise Jackie Gleason or appreciate how Buford T Justice’s hypocritical, abusive, belligerent and meanspirited asshole of a character reflects on his history as a comedian.

Look, this movie came out at the same time as Star Wars and that movie’s like cultural wallpaper now, it’s not like movies from the 70s are invisible to people born in the 1980s, but as with all things for me, the cultural bubble of the cult environment distorted things. This movie was absolutely Not Safe For Cult.

But my dad loved this movie.

And that meant that I got to watch this movie. I had to keep it a secret. I don’t remember if it was taped off the TV, perhaps, or if this was just as we got access to DVD players and it became an early purchase. I don’t remember why. I just remember sitting down with my dad and watching this movie – with him, yes, telegraphing or repeating lines, a habit that oh god i hope i don’t do that much – and feeling just… normal for a bit.

It’s kind of a family movie, if your family is like mine and a bit weird. It’s not a smart movie and it’s not a complicated movie – there’s not actually much sense of rising tension until the very end when suddenly, everything needs a last-ditch desperation move? But that last moment comes with a line I love so much I forgive the way this simple movie about good natured ridiculous crims wrecking police property doesn’t really properly follow a three act structure.

And, you know, I like it. You won’t have your mind blown, but you’ll probably have some fun.