Why now? Because it’s not Pride Month material, but it’s really close.

Sk8 The Infinity, stylised as SK∞ THE INFINITY, is a high water mark in the long-established genre of The Not Gays. Incarnated in this case as a classic ‘sports’ anime of ‘two hot boys and their mutual special interest,’ a genre deftly feigned by this year’s Misplaced Smooch Month Anime Haikyuu!!, Sk8 The Infinity is a Studio BONES production, with the talent of Hiroko Utsumi, formerly of the other most recent triumphant entry in the Not Gays genre, Free! which was about a heroic group of anime swimboys banding together to fund an animation studio, and also the anime adaptation of Banana Fish, an anime in the comparatively small Actually Gays genre.

And Sk8 The Infinity is, as much as this genre goes, real good.

Look, ‘good’ is a weightless word, all it tells you is I liked it, and I liked this. I liked this anime a lot and I think the story as much as it can signals that a bunch of these hot boys are kissing and it’s cool and the music is great and the sense of kinetic motion is excellent and the villain is ridiculous and the cultural insights are perfect and the boys are really hot and it’s great. I enjoyed it a lot.  If you’re just looking for some extremely lightweight, predictable anime about hot boys who probably kiss, then you should check out Sk8 and then get an AO3 account for what I am sure must be an absolute torrent of fanfiction.

For those who want more, gunna give you a plot rundown and some light spoilers after the fold.

Here’s your basic premise: Reki, redheaded fiery real good skateboard boy, is a friendless dork despite having a hobby and part-time job that make him undeniably one of the coolest people in his school. His dorkiness is amplified by his inability to win at the local…

… secret illegal skateboard races held in an abandoned mine and treatment plant.

Reki is easily the kind of kid who would qualify as the coolest human I’d ever met if I was his age (and I met Shari Lewis), but because the town he’s in and the skateboard store he works for is apparently not worth winning at the tournaments with adults using cyberboards, all his school friends think that this ‘skate boarding’ makes him a boring weirdo.

Then, into his life walks that boy.

That boy, that beautiful, beautiful boy.

Langa, a half-Canadian half-Japanese student shows up, and through events became ensnared in the skateboarding scene, where it turns out he’s an amazing skateboarder (kind of), because, and I know that there are some Canadians right now who can see how this sentence ends but yes, really, because Langa has been snowboarding since he was two. 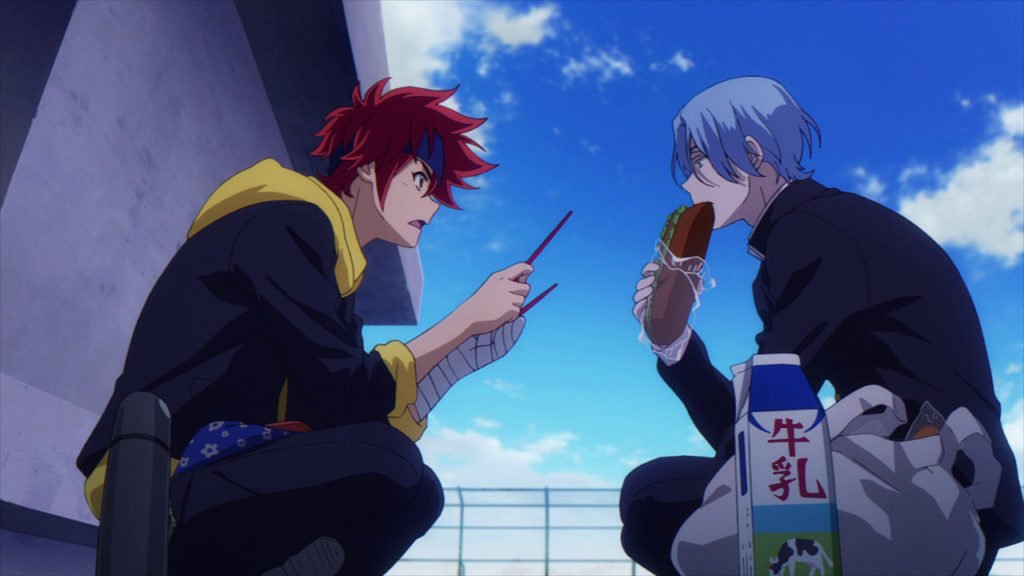 If you know this genre at all, then this is not going to surprise you. If you’re a fan of romantic comedy movies, then you also know the whole plot of this series, even if it’s dressed up in some pretty ridiculous stuff. Boy meets boy, they bond over a shared interest, they lose each other due to a miscommunication, but they find each other again when they’re afraid they’re going to be lost forever. It is straight up the narrative beats of any given 90 minute romantic movie that wants to keep plates spinning and maybe give a character a good third act mope.

Also if you’re familiar with the anime I mentioned, Haikyuu!! and Free! and Yuri On Ice, you may think hang on, those are all kind of down to earth anime with a realistic universe that focuses instead on human drama rather than the supernatural or ridiculous. What’s with the illegal underground skateboarding tournament you mentioned, that seems a bit outlandish. And, see, Sk8 is … not unlike those other anime, but.

What I want to compare Sk8 to is wrestling. Sk8 is a hyper-real anime, an anime where because the main experience it wants to inflict a sort of voluptuous panic, where the experience of skating is composed of both a lot of grinding practice and a willingness to fall, followed by a keening elation at the actualisation of the fantasy. It is an anime about making you feel speed while you sit still, of feeling anticipation and dread and excitement that normally take split seconds to experience. The characters have big, arch performative personalities that are seen by a hooting crowd that act as if they can perceive the whole of the race despite them being present for literally seconds of any given skater’s performance. There’s a ‘heel’ character who throws fireworks, a villain who unveils secret techniques (that… actually make some degree of sense, though, you know, be nice), there’s a child prodigy catboy, a cyber-ninja and an overwhelmingly excessive big bisexual skate hunk. Characters are big and ridiculous and bold and it’s part of the fun.

What the story also does with this bigness, though, is that every single one of these characters who you see at their best, excellently executing exquisite acceleration (oh I bet that annoys some of you) you are also shown skateboarding. As in, having the completely normal failures that come with skateboarding. Characters fall, tumble, roll, faceplant, mistime and misjudge and there is a regular depiction of our central characters taping up and contending with the harm that comes to themselves through the practice. The ED of this anime, which is some beautiful Good Vibes Only kind of music is nonetheless played over a sequence of stills in almost an animatic style of watching as these characters each encounter some kind of deeply injurous failure with classic names like nutcracker and late mackarel.

It’s indulgent and it’s silly and it’s fun and the primary purpose of it is to give you a story full of hot boys who are full of feelings for one another and, because they are all huge dweebs, only expressing these feelings in the form of skateboarding.

“I want to skateboard with you forever, Reki.”

Yeeeah that sentence doesn’t feel like a finished draft, does it? 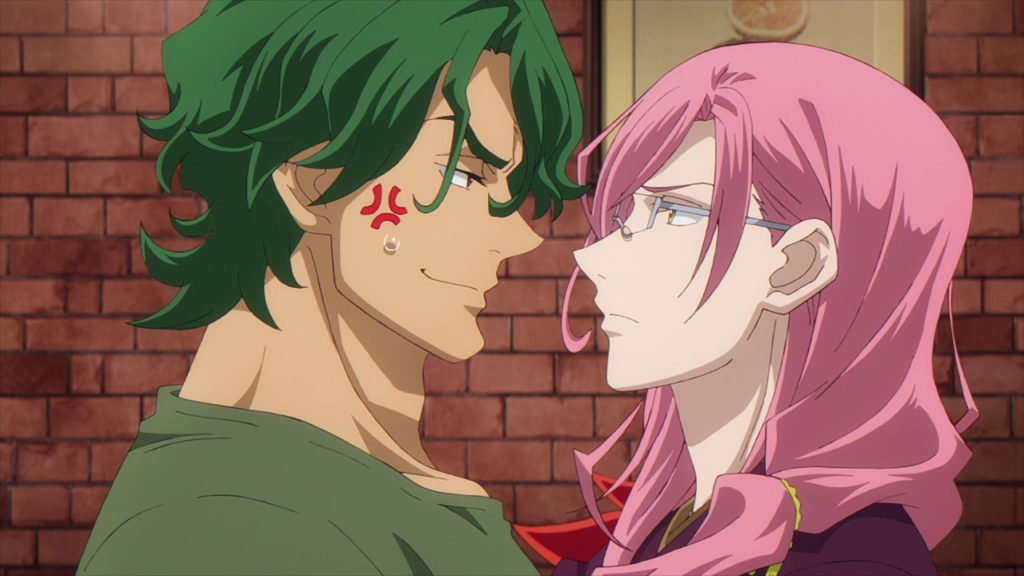 If you think I sound cynical about this genre, you’re right, and I have every right to, because this is a genre that is, itself extremely cynical. There are in this whole anime three women, and each woman only speaks to one other character, and one of them is a fucking skateboard Alexa. It’s like how Love Live is an anime universe where all the presences of masculinity are vaporised, meaning nothing is there to waste time or distract from the presence of the hot boys who are skateboarding together.

The skateboarding is a metaphor. And because it’s a metaphor we don’t have to show the boys making out and giving each other experimental handjobs in their bedrooms after school, even though that is the kind of narrative this story is building around. There’s this great big negative space in many of these scenes, and it most easily makes sense if the reader looks up periodically, and says, “And then the boys kiss, right? That’s what these scenes are clearly about.”

This isn’t just ‘deniable queerness’ mind you. This narrative is full of edits and cuts that treat the boys as the viewpoint and show them being awed by one another, excited by one another, and yes, aroused by one another. It’s fanservice, yes, but it’s fanservice that’s a step removed from the older model. Misato hanging around in shorts and a tank top makes diegetic sense and it creates fanservice because of her thoughlessness – but in Sk8 the fanservice is things like boys clinging to one another, showing no fear or concern for the proximity of their bodies, or literally ogling one another until being suddenly annoyed when they notice ‘hey, wait, that’s my male friend! Why would I ogle him?!’

It is the gayest straight thing I’ve watched in a while.

There are a lot of reasons why anime is this way. It’s not like everyone was waiting around for Yuri On Ice to invent boys kissing. There are social pressures and programming rules and anime are made by contracts being bought in bulk, and there is a give and take with an existing, pretty conservative community. It sucks that anime has to be this way, and this anime is definitely in a genre, following a trend that has its weaknesses and its own language, but as far as examples of it go, Sk8 stands out to me for some pretty basic reasons. 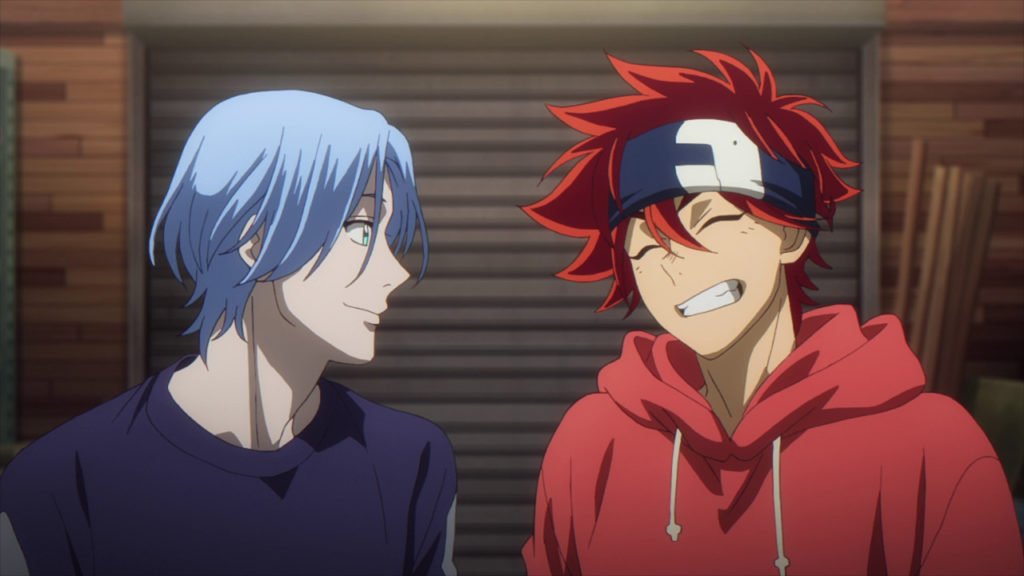 First, this anime is short. They don’t try and drag out a hundred episodes with the promise that if you keep buying all the gacha and statues that maybe they’ll make an OAV where the boys wake up in bed together. You get twelve episodes of well-animated, dynamic, fun narrative that introduces a fun cast of characters, a few big challenges and concludes with Reki throwing himself into Langa’s arms ecstatic that he doesn’t lose him.

Second, and this is superficial as hell, the boys are hot. Like, Joe and Cherry are adult men who are also two very different kinds of hot, and you get to see them in different ways. Odds are super good if I was Langa’s age when I first saw this anime, I would have had some very confused self-defeating narratives about how I wanted to be Best Friends with both of those boys and definitely wasn’t thinking about making out with them a lot.

Third, the skate culture this anime shows, while I’m not an expert and I’m not included, I am at least familiar enough with the style and with the sincerity of it. Langa loves poutine and A&E root beer and the designs of the skateboards and the stickers and the decals and logo all are derived from real skateboard artists. Setting aside the actual wizard magic cyberskateboard, the boards all look (hyper)real and cool. Characters are shown with shifting injuries because of course you get injured when you skateboard.

Finally, as far as metaphors go… man, skateboarding is great. There’s a lot of trying and practicing and exhilirating efforts that are all the better when you can share them with someone. And you’ll get hurt sometime, but you have to just not mind that sometimes it’s going to hurt.

Because you’ll get it right eventually.

See the skateboarding is a metaphor,