Even if you win, you can’t win.

I had no idea that I was going to like this movie so much.

Poolhall Junkies is a 2002 movie with the extremely worrying phrase in its byline: Written, directed by, and starring Mars Callahan. And he’s not in this movie as a minor character, this isn’t a Quentin Tarantino thing – this is Mars Callahan writing a script, then directing a movie, about a character that he plays, and relies heavily on the skills that Mars Callahan absolutely actually has.

Before we go on, some content warnings, and like, one of them is a big one. There’s a reason I invoked Quentin Tarantino.

CONTENT WARNING: In the opening five minutes of this movie, there is a white character using the n-word. It is used repeatedly, it is used in a conversation with a black man, and is used with a hard r. It is a conversation about n-word privileges, and at the end of the conversation, because the white man uses the hard r, the subject is dropped, only to come up shortly after when it’s shown that the black man knows the protagonist wouldn’t talk like that unless something was wrong. It definitely comes across as edgy comedy about Who Can Say That at first. Later, the n-word without the hard r is used to refer to a black man, by the villain, and that black man doesn’t show up to respond or retaliate about that until the end of the movie.

Since the character is played by the author of the script and the director, it feels very uncomfortable to me, and it happens so early in the movie that I can understand if it turns you off entirely.

CONTENT WARNING: In a very generally 2002 way, this movie uses the r-word twice that I saw. It also has some conversations in it between characters who the movie does see as kind of stupid goofballs, where they talk about boobs and vaginas in an extremely ‘oh god, I was twenty’ way to me. Doesn’t make it better, doesn’t redeem it, but yeah, this movie has that stuff in it. And that sucks!

These warnings make it awkward, though, because if you cut these bits from the film you get a film that may well be one of my favourite movies. 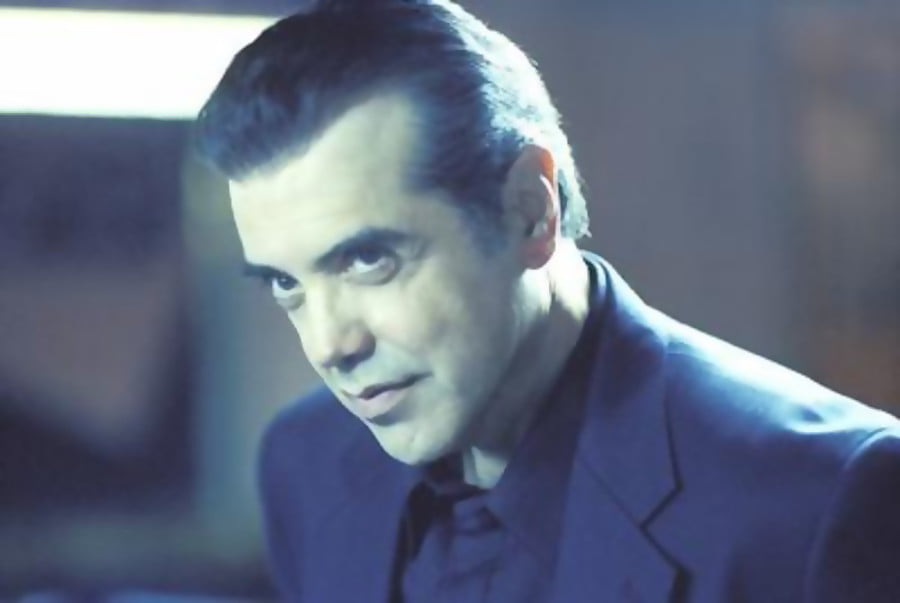 I mean, it’s a weird little gem of a movie, a cult classic apparently. I liked it a lot. It strongly resembled Rounders to me, with the same basic plot structure. Our hero Johnny is just the bestest poolboy, but he doesn’t want to be a hustler, he wants to Go To Nationals. There’s a falling out with his fixer, who is standing in his way, and he leaves the pool hall behind to try and run an honest life as a construction work. Which he sucks at, but he does do it. That is the loop of his life following; he’s really good at hustling, but he doesn’t want to be a hustler, so he keeps trying jobs where he can not hustle, but he’s really good at hustling, and so he hustles his way into jobs and tries to hold them.

But he has a little brother, and he has an angry spurned fixer, and the little brother wants to be a hustler, and the fixer sets things up to get at our character Johnny to lose to his Efficient Pool Playing Monster Man Pro Pool Player. There’s talk about the game, there’s a pool party scene, there’s a lot of reinforcement on the question of who loses and Our Hero Johnboy comes out of it pretty damn good.

It reminds me of Rounders a little, and from me, that’s high praise. A bunch of things that Rounders does, this movie does as well. The game is cut down, where you don’t show players reacting to single shots or hands, but rather grinding each other out, over and over again. There are depictions of people using the game as their long-term job. There’s a demonstration of how pool is a game that’s played by people of multiple classes – poor people in rented spaces, rich people in their private table. Even there, then, you have people tangling with admiration of the game, with recognition of skill.

Look, getting wrecked at pool is challenging to depict well. Really, really good pool is a series of one-sided games where you’re trying to break parity, and that means hustles are about manipulating that parity, it’s about letting someone run you out, or about hitting them where they can’t afford to make the bet. And the best moments of this movie are about pulling to the forefront the drama that happens when pool, as a game of sequential consequence, can completely fuck you.

There are depictions of the paraphernalia around it, too, and the way they show billiards in this game is really interesting in how it focuses on faces. Pool is a game about waiting for the other player to fuck up, then using that opportunity to blow a hole in the plan they were enacting. It’s a really interesting game, with both tactical decisions (how you pot/what order you pot to get your next turn) and strategic decisions (how you pot/what do you pot to ensure that if you don’t get that next turn, your opponent can’t do anything about it) then questions of execution. You can plan all you want but if you mess up the control of the ball, then your plan is – well, you fucked up. And it shows you that, with players demonstrating tense anticipation for that fuck-up… or the realisation that it’s not coming.

Don’t get me wrong: There’s a bunch of focus on the tables. You get to see some very impressive tricks being done, and, as far as I am aware, they are all real tricks unless they are some stunningly challenging edits in there. The Wikipedia page lists that Walken made the trick shot he does, first try, which sounds like one of those things when you’re glad you do it on camera.

Look, this is a game about hustlers and cheaters and liars. It’s about all sorts of tricks people pull but also there’s a demonstration of how pushing anyone too far with these kinds of gimmicks and stunts has an expected end point: You will get hurt. People need to be playing the game with you and they need to agree that the rules say you win. There are places where violence steps in to replace where rules fail, and that means that there’s always a question of how far can you push things. Is the final hustle going to hold? It doesn’t have to hold forever, it holds long enough. 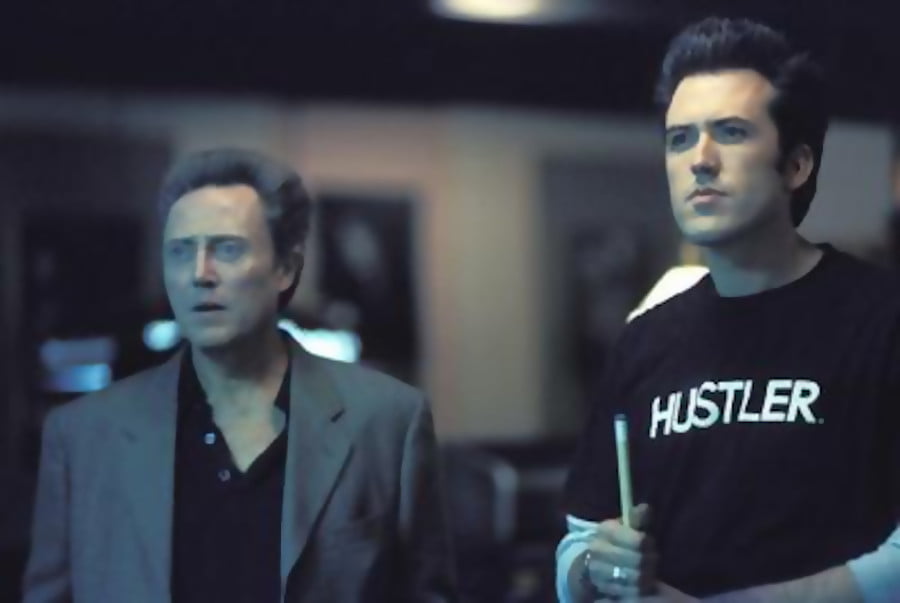 Okay, though, so how did I find out about this movie? It’s because I was looking for someone in the cast.

Who, you might wonder? Well… that opens up the other element to this movie. The cast is stacked with people who, if you haven’t heard of, you may have seen in a movie. It’s just wall to wall character actors.

Our Token Love Interest Tara is played by Alison Eastwood – the daughter of Clint Eastwood, which marks the strange second appearance of an Eastwood daughter to thse blog, after the 2017 horror movie The Vault. She was also the little kid in the orangutan classic Every Which Way But Loose, alongside her uh, dad. But no, no, it was not the association with walking cop show punchline Clint Eastwood that got me to look up this movie. I learned about that later.

And boy, when you start looking at the cast like that and going ‘hey, what about this guy?’ You see the villainous pool pro? That’s Ricky Schroeder, aka Nurse Flowers from Scrubs. You might already recognise Chazz Palminteri, the villainous Joe of the piece, because he’s been in a lot of things that might need an actor with a name like Chazz Palminteri – and hey, he even fits in because that dude used to work as a bouncer alongside Dolph Lungdren. Didja catch that that young rich kid friend, Chris, was Captain Pike’s Anson Mount in his twenties? What about Max, the weird friend who introduces himself with a nonsense line about vaginas? Well, that was Phillip Glasser, who you definitely do not recognise as Fievel Mousekewitz.

Was it the association with Robert ‘Cotton’ LeBlanc? Classic pool hustler, and the hand behind the best trick shots in the movie? I definitely did look for games with the involvement of classic magicians. I watched Ricky Jay‘s acting turns in Heist and The Prestige. Johnny Chan showed up in Rounders – but no. It wasn’t the classic worker’s appearance.

No. None of these.

No, this movie was one of the last – though not the last outing for an actor named Peter Mark Richman, who played Phillip. I was planning on working on this article since last year, only to have the sad news hit me this year, in January, that Peter Mark Richman passed away.

You might not have ever heard of Peter Mark Richman. You might not recognise him. He’s Tara’s boss, the guy that gets run through by Walken’s Uncle Mike and Johnny. And that man you probably only recognise if you’ve seen his one time headlining a science fiction spy thriller movie: Agent For H*A*R*M*.

You are never your worst creative product