This month’s Story Pile is definitely picked with a positive bent. It’s pretty well known that magicians are kinda hokey and the idea of stage magic as a central theme to build a narrative around is going to have to struggle uphill against conventions that magic is a practice embraced by dorks who don’t mind practicing in front of a mirror. Sometimes this is done by involving crime in the story, or star power in the production of the movie.

And sometimes what you get out of that is dreadful.

I’ve struggled a bit trying to write about Now You See Me for a bit over a year now, because every attempt to talk about the movie runs into struggling to describe what happens in it, without getting bogged down in how rubbish it is at it. My typical structure fails me here, and so, I’m not going to do that this time. I’m just going to complain about this movie, which is badly put together doofus garbage.

Oh and spoilers for this movie you shouldn’t bother watch. 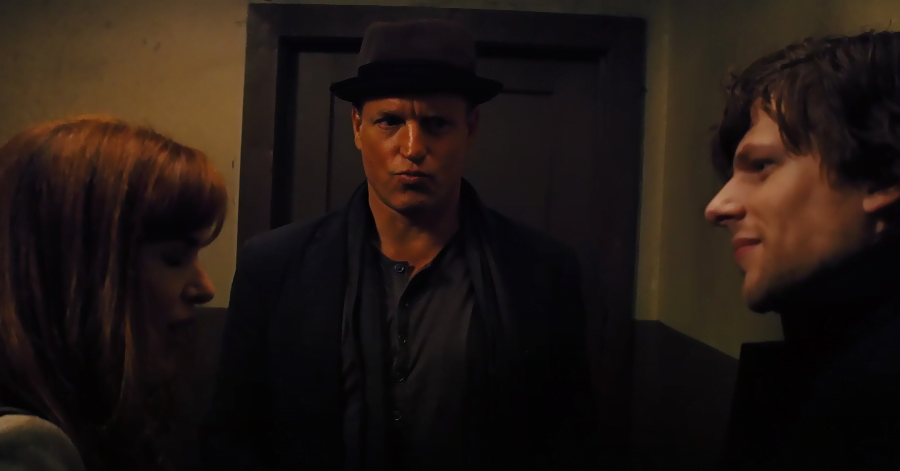 I understand that Dan Harmon, who I don’t like very much, has gone in extensively on Now You See Me on his podcast Harmontown, and I want to be clear I’m not intentionally covering any ground he’s already gone over. I don’t know what he had to say beyond a broad soundbite and I don’t really expect, being Dan Harmon, that he was able to leave the subject alone with one angry expurgation, about how Magicians aren’t cool and making a movie about cool Magicians is a fool’s errand. I mean, he’s kind of right, but I get the impression that unlike me, Harmon doesn’t like magic.

I on the other hand do like magic, but I also think that the people who made Now You See Me don’t. I think they don’t like magic because the four – five? six? – people they selected to play magicians in their movie play them as the most hateable people in the world.

Let’s do the basics though; Now You See Me is a movie about a group of Vegas-style stage magicians who commit a bunch of ridiculously elaborate Robin Hood style crimes while pursued by the police. To say that there’s more to the plot than just that isn’t wrong but it is also overselling what’s there. You have these four very public visible people doing stage shows in big public locations and redistributing piles of money as a ‘trick’ to distract from the fact they’re actually doing that and actually redistributing piles of money.

Then at the end there’s a tedious twist, an attempt to ‘surprise’ you with a finale that doesn’t really matter, which seems to be more for the sake of making a surprise without ever doing anything that begs askance for it. Suddenly, Mark Ruffalo was in on it all along, but he was also better than the Four Horseman, and this whole movie of elaborate nonsense was just a test to see if they’d be inducted to the circles of ‘true magic.’ 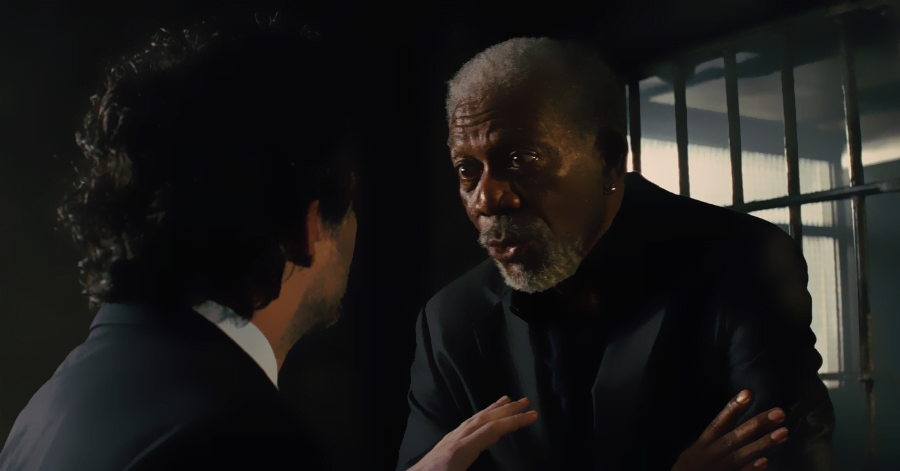 That twist isn’t meaningful, though? Because up to that point in the story, the Horsemen don’t need a motivation or explanation for what they’re doing, or how they’re going to get out from police scrutiny. The end of the story introducing a revenge plot beat, then reveal that Mark Ruffalo has been ‘faking’ his pursuit of the Horsemen so far is unncessary because the story up to that point has not had any question left around it.

After all, our ‘heroes’ are literal, actual wizards, capable of magic hypnosis (it does not work the way they show it) and safely flipping cars on a highway, what does the introduction of the Ancient Egyptian Conspiracy (god damnit) explain that was not already managed? All it seems to do is ‘save’ Mark Ruffalo’s character from being a complete doofus who Hates Magicians for a really specific, silly reason.

It’s a prestige without a turn.

What makes this silly shit more depressing is that there’s the edge of a solid hook there, too – after all, if you do a magic trick with a real consequence, anyone who wants to deal with the outcome has to handle looking silly as they claim no really, magic exists. The problem is, that should lead to the challenge of convincing authorities that the magic actually transpired, because if millions of dollars actually disappeared from a bank account in a place like France, the police are not going to scratch their heads and go ‘well hyup?’ when the magician busts out of cuffs and makes a joke.

That is a dude who’s gunna get a beating. 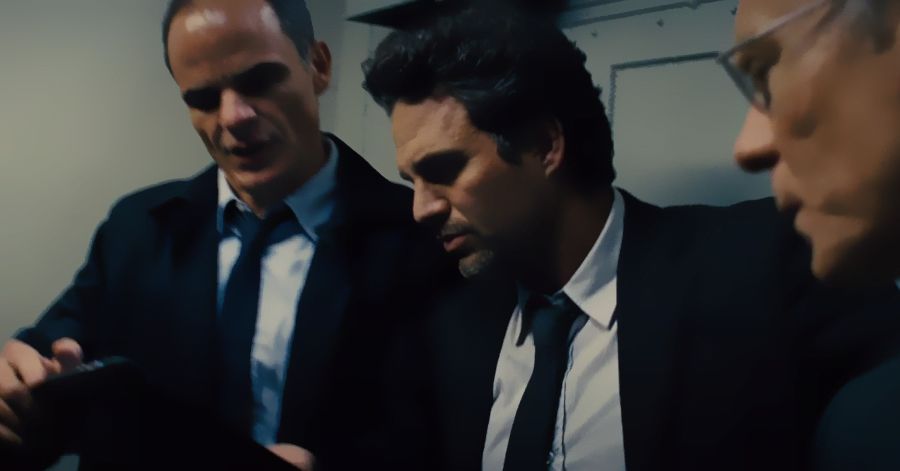 I’d say I don’t know what it is, but I think that’s a lie; Isla Fischer plays a non-entity in this story, the magician Who Is A Girl, who has Girl Problems (he called her fat!) and literally started as a sexy assistant, and without her providing any kind of texture to the narrative, it is essentially five very hateable men back-and-forthing to be the smartest person in the room. It’s a smug off, and at the centre of it all is the worst Lex Luthor of all time, Jesse Eisenberg, a man who I have yet to see play a role that doesn’t make me hate the work he’s in.

In the end, every time I want to complain about this movie, I come back to remember Jesse Eisenberg’s awful shithead character using card tricks to flirt with women, a thing that I’ve never seen card tricks used for in real life. Hell, there’s almost no women in this story at all – just props. Props for other stuff, for the infinite smugness of the incredibly hateable Jesse Eisenberg character I will just call Jesse Eisenberg. He’s an awful person, and his supposed good actions of stealing from millionaires isn’t even meaningfully interesting, because it’s not like he seems to be giving anything up. The horsemen still have money to travel, live, eat, and make elaborate props and presentations. Does it really matter that they’re giving away the millions when they seem to have millions already?

There’s a touch of the fantasy of the magician here, but it’s the fantasy of the magician that gets told as a cautionary tale. The line is ‘the Magician needs to be the smartest person in the room,’ a line that talks of a kind of David Copperfieldiness, a certain weaponised smug. And when it comes to magic, the whole point of the performance is you know things the audience doesn’t know, so there’s naturally some power in that knowing, some manipulative energy there. 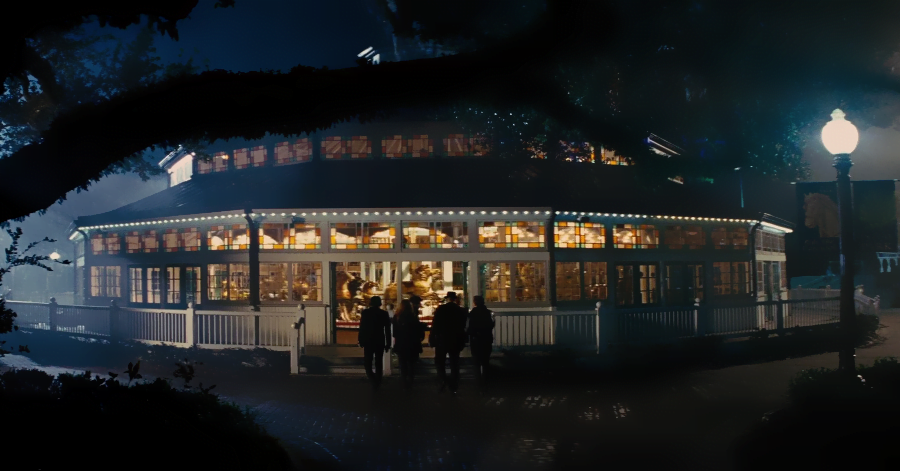 I haaate this movie and even explaining why I hate it is hard. I guess in the end it comes down to the things this movie thinks are cool; it thinks Jesse and Isla’s relationship is cute, and that hypnotism is actual wizardry, and that Mark Ruffalo’s nothing of a character needed a redemption and there was some lingering mystery at the end worth solving. It thinks that I want to see those things when really I want to see this whole movie scrapped and restarted.