You know it kinda amuses me how much I rubbish on webcomics when I keep doing story pile articles on webcomics that are either just good on their own, or that gave rise to other products I think are really good.

Monthly Girls’ Nozaki-Kun is a 12 episode (and some OAVs) anime based on a gag-a-day 4koma webcomic of the same name. The premise is a high school girl named Chiyo Sakura confesses to her crush, and thanks to a reasonable (?) misunderstanding, he thinks she means she’s a fan of his work.

Because he has work.

Because he’s a successful and renowned manga-ka who makes a girly shojo manga, and what ensues is Chiyo falling down into the gravity well that is Nozaki’s social space and the near constant commentary on how weird he is as a person, how weird his assistants are, and importantly, how weird Chiyo is by how all of these elements of the behaviour and personality of actual manga-ka are in some way, natural to her. 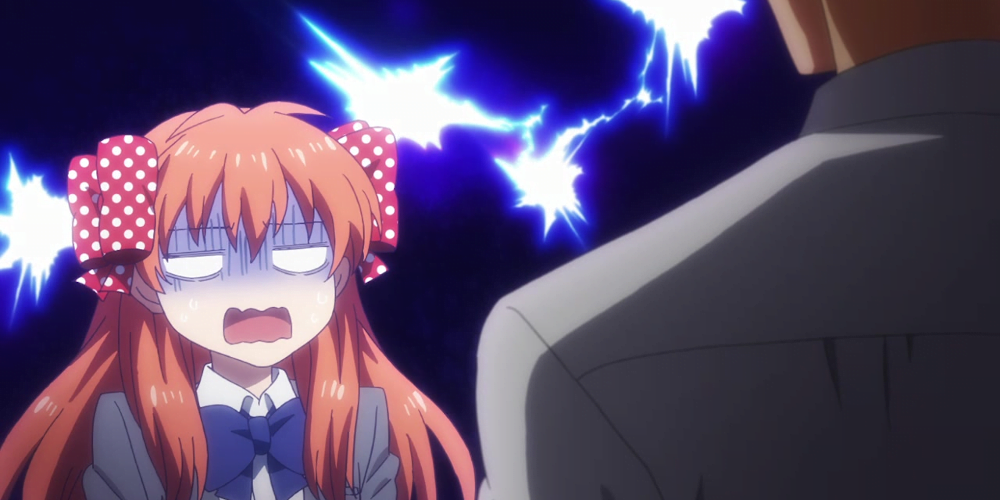 Something Fox commented on when she first started watching this show with me was how it rocketed along; how quickly some ideas got dropped, or how things that looked like a complication of the story were treated as just the resolution of the story in the first place. It is fantastically funny. About once every episode, there’s a joke about artist behaviour, and twice, Fox and I had to stop the stream because we were both laughing too hard at a joke that spoke very truly to us, as people who in our teenage years tried to make manga.

The jokes come from this very niche interest but also there’s a lot of really funny things they draw from that. Would you find this as hilarious as I did? I dunno, you might not realise just how funny three drawings of a house are to a pair of artists who also can’t draw houses. But you at least can appreciate the joke of ‘these three characters share a weakness.’

It’s not all good, mind you. While the show has a probably-bisexual princely lady in it, and she’s cool, there’s this comedy violence she gets exposed to which is very in-genre for a dude character in anime, but feels super uncomfortable when it’s a male upperclassman hitting a girl who’s attracted to her, and she doesn’t seem to mind it overmuch.

It’s not something that’s too hard to overlook, because by the end of the series you do get the sort of codifying sentiment that in this world, everyone is some kind of blithering idiot who’s clueless about just how much they are or are not dating the people they’re interested in. Everyone in Nozaki-Kun is kind of personality-deficient, with some thing about them that needs some time in the oven to bake, which makes sense, because they’re high schoolers. 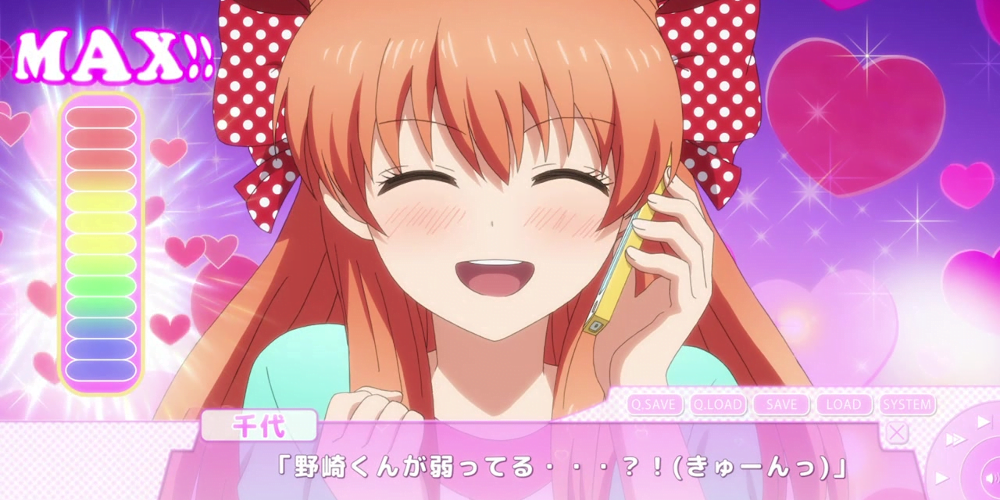 At the very least, something I can appreciate is that Nozaki himself is just a weird space case – he’s not cruel or mendacious or even thoughtless. He tends to have different priorities, and he’s prone to over-analysing things to find the rules of how they work, but he’s genuinely kind to the people around him. There’s one detail that’s left out, which is – like – he’s paying all these people right? If he’s making money as a manga-ka who’s also in high school… that money is being shared.

He’s not making them do this for exposure is he.

Anyway, the potential need to guillotine Nozaki for being effectively a manga landlord aside, I found this series really enjoyable and breezy. I kept hanging around because even though some of the characters suck, they suck in these very believable ways and like they’re growing up and have a chance to get better.

I think one of the things I like about this series and the way it’s full of these relationships that are kinda dating but also kinda not. There’s this nebulous space between these characters as some of them consider whether they could be dating or should be dating, or what being in love even is. 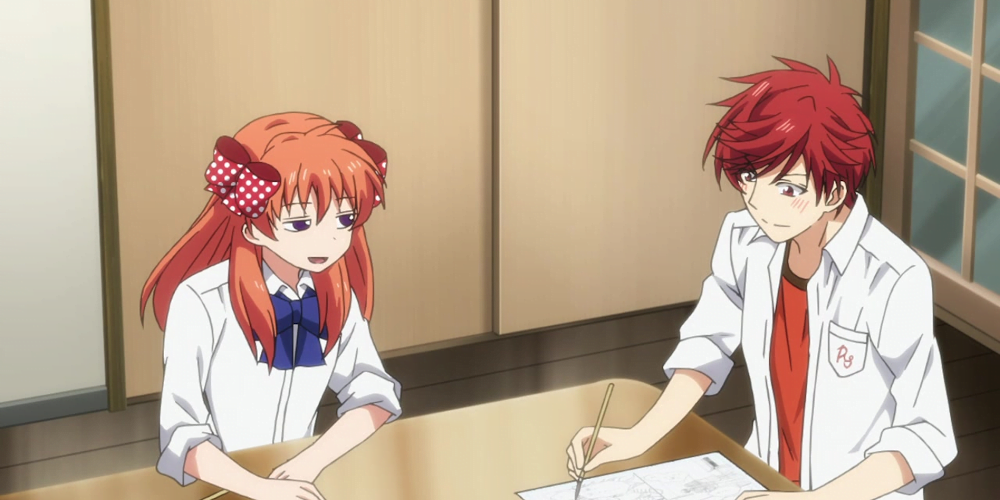 I hesitate to project this onto the work, but to borrow from my friend Corey, a lot about this series makes sense if you think most of the characters in it are to some degree or another autistic. They seek rules, they seek roles, they want people to give them examples of social situations, they react powerfully to disruptions, and Nozaki even does this thing where a hyperfocus subject is brought up and he uses it to bond with someone socially. And if there’s four or five of them with shared hyperfocuses in the school and they don’t handle actually executing on social things they understand really well, everything makes more sense. 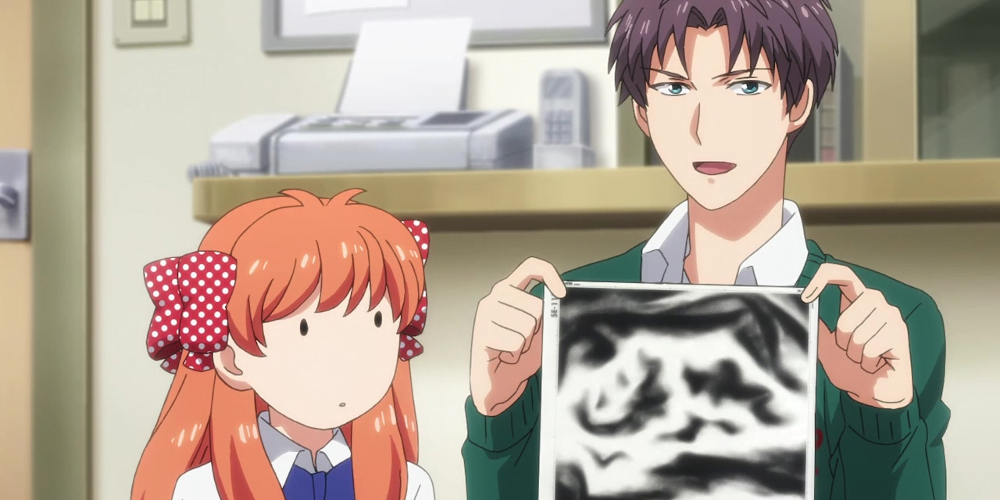 There’s also this very important boundary fence in this series, where there is one character who is shown, in the series, to just suck ass and while nobody can retaliate at him, nobody makes excuses for him and they all just accept ‘oh yeah, that guy’s bad’ and they try and avoid him.

Now you might be wondering why I chose the screenshots I did, and it’s because, even if this anime isn’t your cup of tea, even if you don’t think that much of it, I recommend checking out some stills, because Chiyo’s face, and the things they do with it, are breathtakingly funny.

She is a mood board of a person and she’s great and I kept clipping pictures of her to use as reaction images.