There are challenges describing series that are part of the zeitgeist. When I talk about videogames it’s always as the Cool Take school of study, where nobody else is talking about the game and therefore whatever I’m saying is presenting to you a game you might not already know about, and giving you a reason to consider what the game is like or about, or some reason to care about it, or connect it to your life. When it comes to popular main-stream movies and series, though, that task is more difficult both because almost certainly someone else is giving that take, and there are some takes I don’t feel equipped to deliver.

Before I go on, though: I liked Luke Cage, Season 2, but it wasn’t a lot of fun. Good, grungy drama, and the time I can consciously think I had the most fun were sequences with Bushmaster being righteously angry. 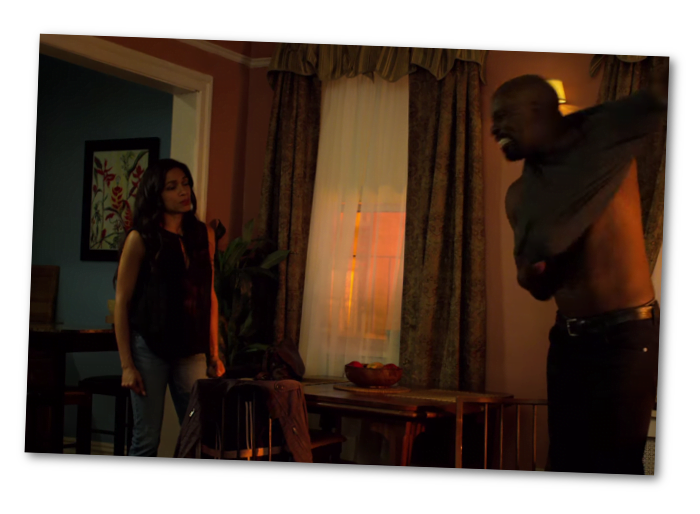 I do know this moment.

In Luke Cage Season 2, there’s a point where Luke and Claire, his at-the-time partner fight. They fight, and they argue, and Luke gets mad and punches the wall. Since he’s Luke Cage, this puts a massive hole in it, but it’s not like he needed to be Luke Cage to do that. Claire reacts to that violence, and by the morning, she is gone. And it’s not an impetuous, fearful flee – she says, very clearly, that this is a choice and a promise.

And staring at the screen, I said, dude, you already have.

We know that moment where you lash out and hit a wall. If you’ve got any smarts in you, if you’ve got the sense in that moment, you lash out near a doorframe, but not too near, because that way you don’t risk smashing your hand into a support strut, and maybe the harm you do to the wall will be minimal. It hurts. It always hurts. And it always does more damage to your hand than you’re expecting.

The important thing is this is one of those things we’re shown in media. It shows up a lot.

There’s tangled psychological reasoning for this stuff. It’s common enough that hand injuries for punching walls are a statistically significant percentage of injuries experienced by young men going through puberty. I know when I did it, I know why I was doing it. Sometimes it was to see that I had some impact on the world, that I existed beyond my own self, that I could change things. Sometimes it was self harm – to hurt, because I felt bad, and if I felt bad maybe I’d stop feeling bad.

The psychology of this moment is, like I said, tangled.

But one of the things about this moment, the thing that really drives it home is I had seen dudes in media punch walls while they were angry. And I’d seen it a lot.

The rationale, sort of, is that there’s a need to hurt something, that the violence has built up and needs to ‘get out’ and hitting the wall is the solution. That’s how we think of it because that’s how it’s presented to us in media. That’s what it is to be a guy, to have the violence just, y’know, in us. We’re doing the right thing by directing it into a wall, to not hit the actual person. And we’re hurting ourselves doing it, which makes us noble, in a way.

It’s shown that way, but it’s not really that.

It’s a lot of things, but it’s not the noble vent of primal rage we like to imagine.

What it is, is showing the observer, I can and will do violence, and I will only control it so much.

To see Claire react to his ‘I won’t hurt you’ with a clear, firm and definite example of how, no, your reason isn’t good enough was amazing.

And then we follow Luke as he tries to work out what that means.

I don’t think he ever gets it. 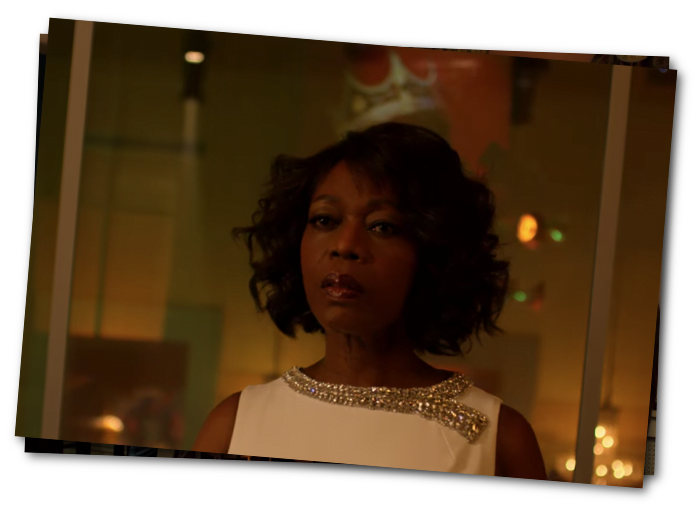 There are other moments like this in this series, moments that I didn’t expect and wasn’t predicting.

I wasn’t expecting the back-and-forth of Mariah and Tilda. The introduction of her daughter, a doctor and holistic healer (which doesn’t annoy me in a world where Danny Rand exists (expect those two to clash in a fair universe)), the greater insight into the characters of Mama Mabel and Pistol Pete. We don’t just see Mariah – who we already knew as a woman who could shockingly leap from one thing to another in the first season, and we knew had suffered something terrible, terrible enough to murder her brother for mocking it.

But that was a trigger, a catalyst, and also something that put provocation in Cottonmouth’s hand. We didn’t learn about what it meant to her until this season, as we saw that hot-and-cold, that wild variance, in Mariah trying to connect to, trying to love, her daughter.

I wasn’t expecting to listen to a woman explain the nature of a family built around lies, and the way that peculiar arrangements were made to conceal terrible, terrible violation, and to hear the assonance of a woman whose damage was so vivid, so jagged, that she was still building methods to cope, to replace the part of her emotional life that had been burned away.

Because she is not a reminder of her trauma – she is part of that trauma.

There’s a thread of trauma through Mariah’s story and it always comes back to Mama, who loved her, and Pete, who didn’t. It informs how she deals with other men, her businesses, her self-supported values, and even the way she handled her husband and brother. It killed her family and it killed her and at the root of it all, at the start, is the violence of a bad man, and a girl who was made to feel it was her job to avoid it.

And there’s one final thing. 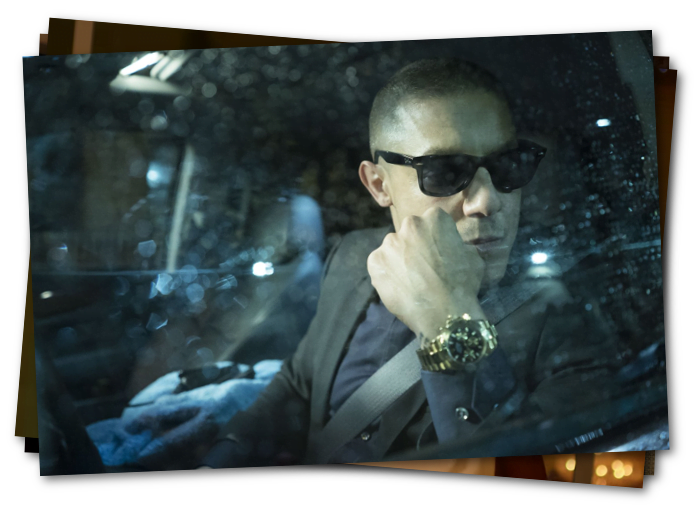 There aren’t a lot of bi guys in media. There are a few gay ones, there are quite a few bi overtones, there’s a lot of stuff where people kind of hint at it, maybe, maybe not. It’s rare to hear even public events described in terms of bisexual men – when pastor Mike Haggard, who had a wife with whom he had an active sex life, was revealed as having sex with male sex workers, the description in the media was that he was secretly gay. The idea of guys being bisexual is usually kept out of sight. It’s mentioned, it’s hinted at.

Shades is bi. Cheyenne might be bi, might be gay, I dunno. But Shades is bi and doesn’t want to admit that about himself. The man is caught between two identities. He loves Cheyenne, he loves his friend, but he is a gangster. It’s almost a huge relief that he reminds you of every bad thing he does, because when he’s deep in it, throughout this series, you watch this man act constantly in the name of love, and in the name of defending the people he cares about while not being willing or comfortable to recognise that care to himself.

As with Daredevil, the Kingpin made that series. Here, the fact that all the villains are responding reasonably in a terrible environment makes them all the more compelling. Luke is important, important in a way that a bulletproof man with almost no infrastructure must be, but in amongst that story, there are these moments.

Like the moment when Shades, on the edge of tears, tells the man he’s killed that he loves him. 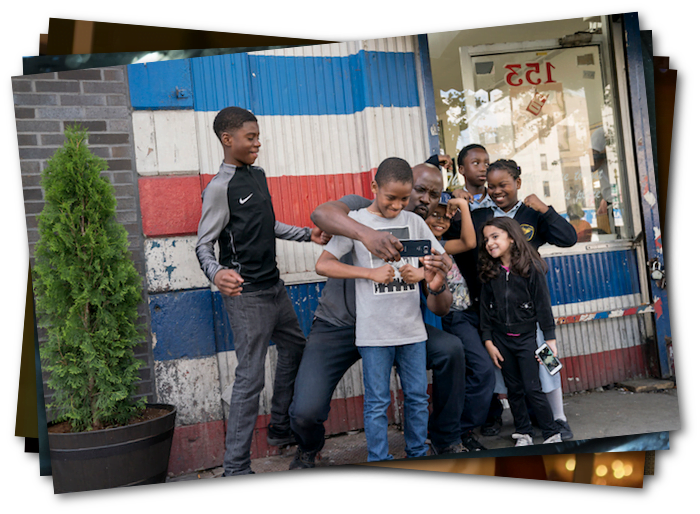 It’s funny, from  media studies standpoint. You can look at all these characters and point to how they’re reflecting media trends, talk about how they’re responding to the ‘normal’ way these stories go, the ways they think things should go, and then realise they can’t and won’t go that way. And Media is omnipresent in Luke Cage – the apps, the videos, the constant use of cameras and sharing media, the way people record one another and react to and respond to tv broadcasts and the rumour mill and branding. The involvement of hiphop legends, the way people try to frame Luke, the value of a painting, even the way the series ends with Luke looking out through a circular lens, and how it makes him look.

It’s very easy to describe something that makes you uncomfortable as ‘complex.’ It’s easy to say something you don’t understand is brilliant, because you can imagine all sorts of heights of meaning that you can’t reach from your position. Luke Cage Season 2 is absolutely brimming with uncomfortable moments, with these complexities that, watching other people, I don’t think they get.

But I do know those moments.

When you lash out.

When you confront your damage.

When you fall apart.

These are the moments of Luke Cage, Season 2.