Okay, so we have an established formula for Jimmy Buffett albums at this point; he basically has three dials of ‘nostalgia,’ ‘chill,’ and ‘alcoholism,’ and there’s an occasional dash of whatever it is he’s thinking of exactly right now. After Pink Sports Coat we get Living and Dying in 3/4 Time, which was where I learned what a time signature was.

Fifteen years after I first heard the album. 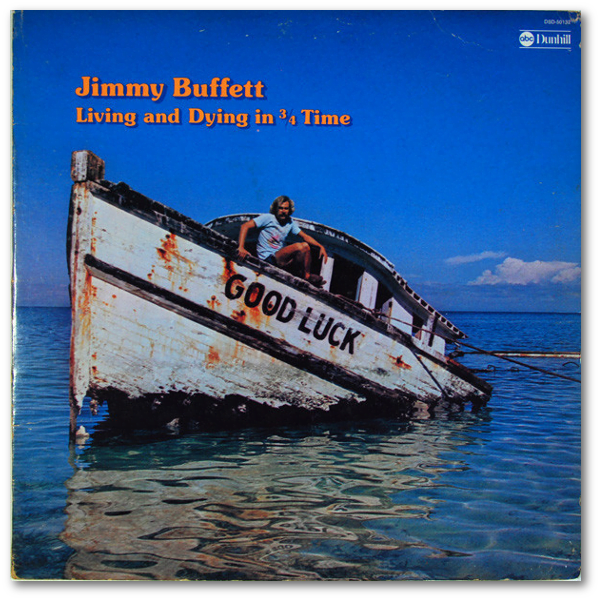 First up, this album had some mainstream pop success with Pencil Thin Mustache and Come Monday, songs that served up the nostalgia and schmoop in pretty solid measures. Pencil Thin Mustache is especially funny to listen to when you remember it’s a dude in his mid-twenties talking about feeling old, making the whole affair feel artificial now in hindsight even if my whole life, Jimmy Buffett’s been the same age as my dad, and therefore, never younger than me.

Get off my lawn, Jimmy.

Anyway, sure, whatever, Come Monday is a – actually no, wait, let’s not skip over this one. This one taught me something, a message that’s served me well in relationships. He refers to himself as being in a proud, ugly haze. Later on I learned the song Foolish Pride by Hatsune Miku. That song includes the lyric Chalk another love lost up to foolish pride, and it’s kind of the whole point of the song. She’s not subtle, that Miku. Anyway, the thing is, I realise there were a lot of times I was doing things because I didn’t want to feel like I was weak or stupid for being mad or hurt in the first place, and I know for a fact there’s a lot of times my long-term relationships have been helped dramatically by a willingness to recognise that I’m being proud and setting that aside.

It’s surprisingly hard. It’s fucked up enough that my ability to recognise these moments in myself, stop, and immediately apologise for being a stupid asshole that it sometimes upsets the person I was arguing with because they can’t believe I actually mean it. That’s weird!

Anyway, Come Monday is a very generic song but it taught me that my pride could hurt the people around me for no good reason.

Anyway, you know what, let’s just skip to the B-side on this album because it fucking rules. Uh, Brahma Fear and Livingstone’s Gone To Texas are attempts to capture the country market again, and Brand New Country Star is making fun of that same market that doesn’t like him (and we’ll get to that). Ringling Ringling is one of those ‘loser town’ songs that touring musicians wind up writing. Anyway, whatever.

The B-side of this album starts with The Wino and I Know, a song that scored on my brain the phrase I am trying to get by, being quiet and shy, in a world full of pushing and shoving and fuck me if that isn’t a phrase that perfectly encapsulates some of my beautifully soft friends. I may not be a quiet and shy person, jagged and bloodstained as I am, but I 100% here to get hot donuts and coffee for my friends who just want to be the metaphorical flannel pajamas of life.

Saxophones is a blatant callout of the way country music (the dominant music of his home state of Alabama) treats him, despite his growing success and mainstream success and it suggests that he’d be better off doing ‘rock’ music with saxophones to try and get their attention. It did not work. It didn’t work for this album or the next, but it’s still a fun track and it sounds good.

Gods Own Drunk is a funny bit of stand-up, barely a song, but whatever. The Ballad of Spider John is a really good, strong closer song for the album, a real classic kind of riverboat story song that you might imagine Kenny Rogers would record if most of what he did didn’t suck ass. But the real gem of this album, the thing that I will always hold up and share with people, the song that may be his best song ever is the song which got this album banned in Canada.

West Nashville Grand Ballroom Gowns is a short song. Two forty. It’s a story song. It’s about picking up a hitch-hiker who shares maybe fifty words in the song. It’s not a big song. But it jam packs those words with the tension of a ruined relationship with an abusive mother and delivers the most satisfying final refrain of any Jimmy Buffett song. Period. This song ends with a raised middle finger fit to split a soul and I love it.

This is probably also the first place I ever heard the word ‘fuck.’

Ugh, I love this song so much. I love it because I had a childhood of women in songs and stories who really didn’t matter, really didn’t make choices and sure didn’t get to cuss their bad moms out.

If you listen to the albums on these articles, you can absolutely skip everything except West Nashville. It’s that good. When talking about this album with Fox and my dad, the funny thing is you can knock out the two best songs on the album and you’d still have a pretty good Jimmy Buffett album.

There’s another album that’s more jam packed, that has more amazing songs I love on it, but this one, this one has the song that I think more and more may just be my single favourite Jimmy Bufffett song.