Videogames are weird as an art form.

When you dig into the history of most art forms, there’s a very clear point where our records go ‘here b dragons.’ When it comes to film, we’re pretty confident that roughly half of all film from the silent era is just lost, and all the record keeping and attribution is deterioated and badly kept and it sucks. That’s film, a medium that’s reasonably new. When it comes to videogames, though, thanks to a combination of existing privilege structures and the inherently replicable nature of internet data, there are parts of the history of videogames that are preserved remarkably well.

This means that there are some times when the spread of videogames can kind of look like a sort of sequence of little popular explosions. First Person games tended towards RPGs until the little lineage shown in Children of Doom by Campster. You can often point to instigatory events that caused specific sequences of triggered events because games actually document their inspirations or technological licensing of engines and whatnot. That creates an interesting, almost cladistic model of game development. You can point to small windows of time when lots of games happened really quickly, and see the ways they’re related to one another.

It’s often seen that the 90s were the day of the FPS, but there were other genres, other unfolding branches of the tree, and one of them happened in strategy games. There was a tend towards war games being slow, turn based, mathy and strategic affairs, until the creation of Dune 2  (1992) and the (comparatively) slow follow-the-leader from Warcraft: Orcs Vs Humans in 1994 and then Command & Conquer in 1995.

We’re going to talk about a strategy game.

We’re going to talk about a real time strategy game.

We’re going to talk about one of the Australian made real time strategy games from the late 90s. 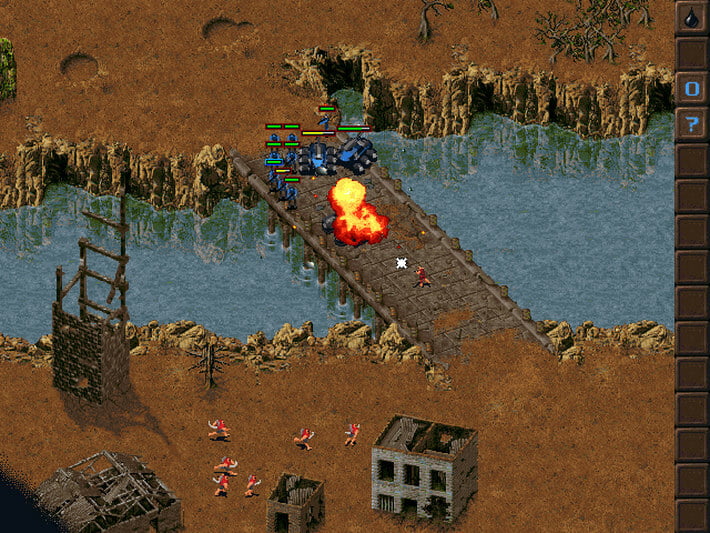 Krush Kill N Destroy and in this case, Xtreme, which is mostly just ‘all the patches and internet content,’ is a 1997 real-time strategy game firmly in the model of the Command & Conquer games with a minimal interface and minimal specific control over your units. You get animated videos of various actors who absolutely had starred in Neighbours and Home & Away at the time, who told you the story of the campaign.

The campaign, such as it is, tells the story of the Survivors and the Mutants, where at some point in around fifty years, all-out nuclear war will ensue, humanity will wipe itself out, the surface will be entirely populated by horrible tribal mutants and monsters with weirdo warped bodies and faces, and a particularly yobbish manner of speech,  and then when survivors emerge from vaults, what you get is a natural war. Nice smooth tech vs Mad Max-ass weird monsters, and that’s your lot. Units are mostly identical, abilities are mostly identical, with some precise differences about what shoots fastest of each enemy.

It’s definitely a game brimming with personality, though that personality is of the deliberately cringey, self-aware patheticness of a videogame story told by people who can’t believe they’re getting to tell a videogame story. The narrative of the missions isn’t meaningfully interesting – you just do the missions until there aren’t any missions. Some of them, you’re winning, then you’re losing, then you’re winning again. Doop de doo.

It had personality, but when you dig into what that means it mostly meant that there were lots of meanspirited jokes about ‘symmetrical’ people and post-apocalyptica tropes. You know how it goes. You played a Fallout game? Well, imagine a forum Rp of that, extended for ten hours. 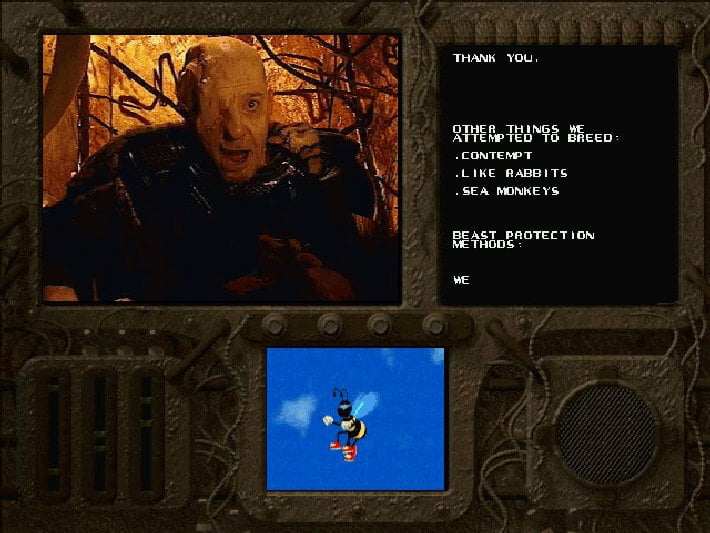 This is not the most limited interface, not the purest way you can do a RTS game without any kind of unit-specific abilities, but it’s damn close. Yet despite this, the game had a lot of different units, with categories of ‘vehicles’ and ‘infantry’ that all needed to be paid for with a numeric resource (oil, in this case), and a non-obvious resource (time). You could make units produce more quickly by producing lots of buildings that made them, but it wasn’t like each building individually created the things you asked them to create.

There was a system to represent sabotaging a building, with buildings able to hold ‘defenders’ that would protect it from saboteurs getting into the building, but almost always the building could be better dealt with by shooting it. The largest units were typically speaking not worth it, because the medium units did the job better for the price and time invested, and the weakest units were very weak indeed, meaning that even encounters you were losing you still lost slowly, which was tedious. 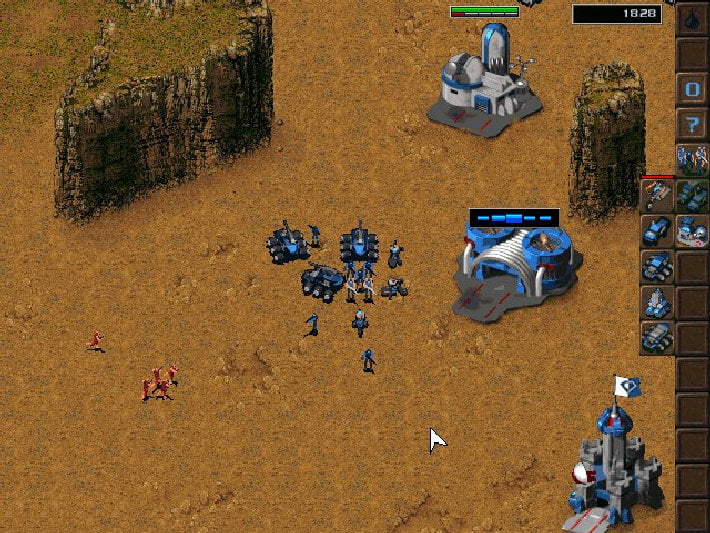 So you might notice that nothing I’ve said about this game is remarkably positive. That’s good, that’s the vibe it puts out. It isn’t a game with a lot to recommend it. When you pull the game apart and start looking at how it works, too, you get a bunch of interesting complications under the hood, because for example, the game’s AI is… rudimentary. Specifically, it doesn’t know how to handle deducting money from the AI’s income and handle moments where the income bottoms out, so instead of managing that, the game gives the cpu opponents infinite money.

But don’t worry, if you think them having infinite money is going to result in some clever strategies or complicated bases, the AI doesn’t know how to do that, and will typically just build to meet its basic needs and spend all of its infinite money on zerg-rushing you with units it can afford.

But before you worry that that sounds like a strategy you can best with your units posted around your edges as a defense, ho ho ho, you fool, you don’t realise that your unit AI is also woeful, which means that when they see an enemy approach, they will not shoot back until they are shot at. This means you have to babysit every unit, and make sure you click to attack first when enemies get near you.

Alright, dire CPU, kinda clunky interface, uninspiring story. Why care? What’s the big deal? Why did I talk about this and not the other two, much better Australian RTSes from the same time frame, Total Annihilation and Dark Reign?

Because as the weakest of the three, KKND has a little place in history.

And far away, in Britian, Creative Assembly saw those numbers and said: Holy fuck, it is so easy to make a RTS that sells.

So they made Shogun: Total War.