You know what, I’m not going to unpack for you the incredibly obvious idea that I, me, the person I am that writes this blog, loves the hell out of John Wick. Right? And okay, the series of movies are moody and atmospheric and they’re excellently made and full of deeply thoughtful imagery and they’re created primarily by the people who normally don’t get power to make movies like this, so you’re seeing the expertise of a niche group expressed in the medium they’re best at and so you get this fricking amazing movie of practical stunts put together by stunt crew who know their discipline down to the the bottom of the floor. Excellently made, brilliantly compelling, fantastically fun, and full of all these actors who are great doing a great job, nobody needs to hear this because as a mediocre millenial white guy of course I love John Wick movies you can just kind of assume and even if you were wrong it wouldn’t be offensive or anything.

No real spoiler warning, I’m going to talk about one character and they show up early. 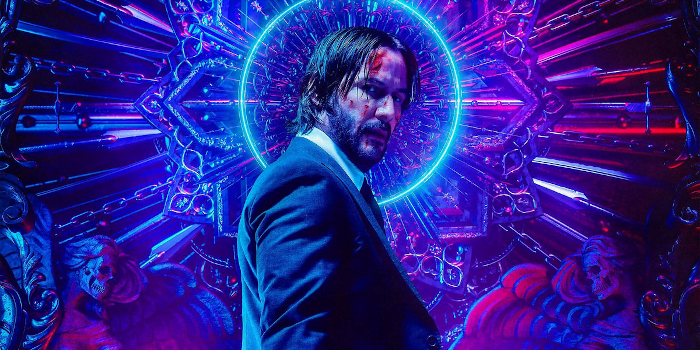 Okay, why am I bringing this movie that’s so good it’s boring to praise it?

I kid you not, yes, that is what I’m doing here.

It’s Pride Month. I try to talk about Pride Monthy things. But I also am not a person given to interest in the sorts of slower paced, contemplative, non-genre queer media that would be, as it were, the ‘easy out’ for this theme. It’s like how apparently, I want to write about smoochy games in February but I kind of hate the visual novel genre. Not handy. Ultimately, I like talking about pulp and genre and indulgent media, because I feel it’s the stuff we treat as ‘not serious’ that merits serious consideration. Atomic Blonde? A gift. I regret, genuinely regret, writing about The Dragon Prince in September when I did because that’s also right up my alley as a fun adventure story that also has queerness in it that I’d like to talk about.

I’m also trying to not focus on the same thing all the time? Because let me tell you if I wanted to just write about a horror movie with a suggestive lesbian or bisexual girl in it I could absolutely fill a Pride Month with those, and I know that my writing tends to bias towards femmes and trans women, because… those are the people around me giving me lots of positive feedback but I don’t just want theirs I am so desperate for approval it is embarrassing but anyway, anyway, anyway. 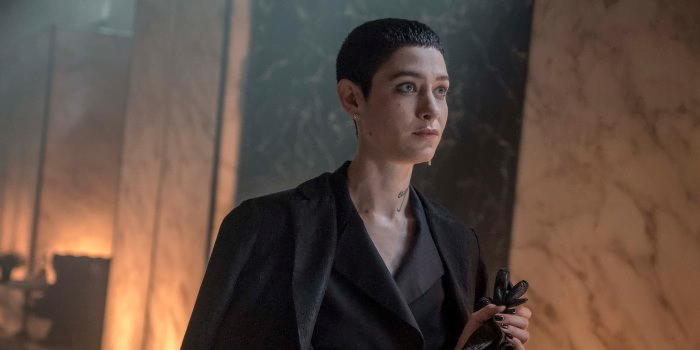 Vital statistics time. The Adjudicator is given only that as a name, and they’re played by Asia Kate Dillon, a nonbinary actor. They asked for the adjudicator to be nonbinary, which is another one of those ways that hey, including more people in your work gives you more stuff to work with. The character of the Adjudicator is presented as the appearance of a person who exists transcendentally; they are not part of the existing gangs and structures in the Assassin Culture of John Wick, and they are at a level where even the terrifying demonstration at the end of John Wick 2 is beneath them.

The character, very literally, exists outside the rules, outside the system. They aren’t a mediator; they aren’t between, they aren’t a person who exists in state A and state B. The Adjudicator doesn’t have a conventional name, a conventional identity, and they aren’t paying or exchanging value in this undercover war. They turn up, they make demands, and everyone around them knows to do what they do. They represent power, but they also represent an external other.

We also see this external group includes people who aren’t nonbinary, too, so it’s not like the Adjudicator is made to shoulder otherness entirely themselves. They’re also not scheming or manipulative – they’re stunningly clear and unambiguous, all the time. There’s rules, and they know them, and they are not here to fuck around on that front.

And what’s more, this character is at no point misgendered by anyone; they aren’t even explicitly gendered by anyone. Nobody uses a wrong pronoun and needs correcting (which, to be fair, works, because mostly, nobody talks about the Adjudicator because they’re scary as hell). It would be, in fact, very easy to miss that the character is nonbinary, because it’s a consideration through exclusion. Sometimes when you see this kind of thing done in a story, it’s an artful kind of dance around natural sentences, or interruptions, to leave something unknown. 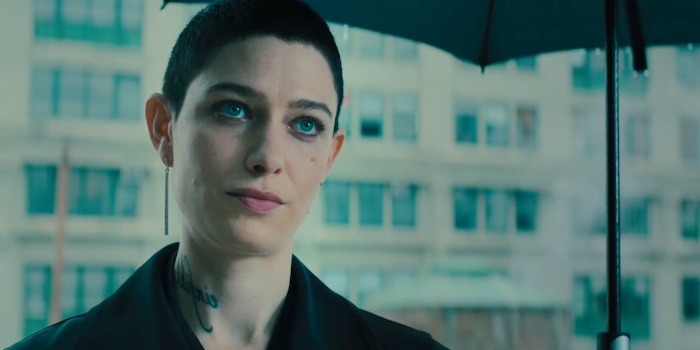 Asia Kate Dillon and the crew behind Para Bellum have said that yes, the Adjudicator is nonbinary. It’s official, and it’s great, and part of why it’s great is because this is just a kickass action movie. Nonbinary people get to be players in the assassin wars, they get to fit in, just fine, in our cool gun-fu practical effects stunt-driven dog-revenge movies.

Is this That Good Representation? No! But you don’t build Good Representation out of single pieces of media. You build it out of lots of different things, you build a landscape, until you can look out at the things these movies say are ordinary, expected, and typical. You notice how in this movie there’s a lot of different people of colour? Not all the assassins are white guys? Same thing.