What you care about shows in what you make.

A while back Kelly Digges made a twitter thread about the idea of Poetic magic. I bounced off that thread to launch into what I wanted to be a discussion of how the very typical Vancian magical system that we see used in Dungeons and Dragons is a lot more European than a magic system need to be.

There’s a way magic gets used in fantasy settings to represent a sort of ‘time gap.’ Lots of settings use magic for fast travel, fast communication, and remote observation. Magic, largely, is a way to separate people from other people, to let an individual do the work of many people, or an industrial machine.

You also tend to want to make magic limited in its availability. The scientific magic of Vancian D&D systems leads to some really weird stuff about how it’s actually pretty affordable, from a government perspective, to change the world wholesale with things like eternal free light sources or always-maximal crops. The usual question of ‘why isn’t everyone using this’ is answered with ‘uhhh, because they can’t.’

But this isn’t about that, so what about that. Another time we can talk about different approaches to your magic system in games.

For now, I want to talk about one of the best magic systems I’ve seen in a work for a while.

Disclaimer, though, ahead of time: I really like Melissa Elliott, the writer of this series. This article isn’t meant to curry favour or anything, but I know I’d at least get a personal message if I spelled her name incorrectly. I’ve been given in-progress text of hers to give feedback on. I am, basically, a little closer to this than normal. 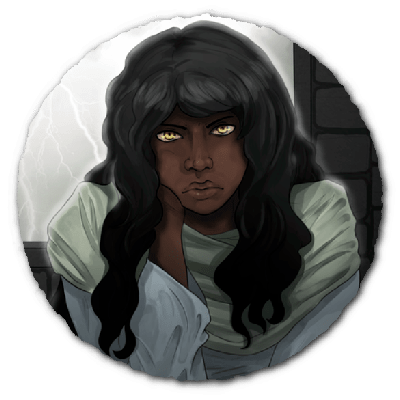 Okay, so here’s your really basic outline, focusing not on the plot. In the world of Glory in The Thunder (Resplendant in the Sky, Fuffle in the Something, Mruh mruh bweh High), there are three basic layers of ‘magic.’

The first set are just the things we use magic for in a lot of settings. Need to cover distance fast, don’t feel like looking up how fast horse travel actually is, just use magic horses. In this case, the story uses a car, though I’ve no doubt Elliott is absolutely able to tell you the proper rate of locomotion for horses. It also uses guns, which allows for a different relationship to swordplay and violence, and means that someone who’s deadly at range doesn’t have to be a mage or an archer.

These are just some minor stuff but it’s important because it means the magic doesn’t get pulled into basic story conveniences of the plot. There’s a lot of really mundane stuff that knowing your technological levels allows and in many settings, magic has to get involved to accomplish.

The second grouping of stuff includes the idea that in this setting, souls are things that exist and have an energy and that energy can be used to do or make things. In most cases this is used to make monsters, in a few cases it’s used to make replicas of people, and most notably the setting includes an actual race of self-perpetuating monster people who reproduce through murder, claiming a soul to make a ‘sister.’ This particular idea will get revisted.

The third grouping is where the real meat of the magic system lies. In this setting, a small number of characters, chosen by destiny (whatever) are given the power to be a God Of [Thing], and then the story shows them mostly using [Thing] in a way that reflects them. Some characters have a nice, basic [Thing], like lightning or the colour puce, and they just use it in one single way that makes sense to them.

The story doesn’t really do much for the inner life of some of these powers. It’s really focused on giving the inner life and what it feels like to use this power for one character, a character the author clearly loves making feel angst and distress, so for him, most of the time, his powers are directly related to that angst and distress. Basically you get to watch someone squirming and struggling with their own incompetence, and I have a hypothesis here, but it might be invisible ink for even the author.

On the other hand, we get to see some characters using these powers in remarkably thoughtful ways that if you think about them often strongly resemble textbook problems. Things like the trolley problem or physics textbooks about the propreties of sound, or ‘if you could do X.’ A character who can see the future constantly avoids explaining how determinism looks to him even as he spends his time setting things up in a position that seems to suggest he is himself enacting a deterministic model. The ability to see people’s secrets create questions of passwords and caves.

This is a fantasy novel where whether light is a particle or a wave has had to be defined for the magic system to work.

Melissa Elliott is not an arts major. She’s qualified in computers, information security in particular. Her day job for a while there was spending her time finding the ways people’s computers were leaking information. Her background before that, she will proudly tell you, was in hacking, the endless pursuit of ways to break things that may have only asked for breaking by being hard to break. There is a large portion of this woman’s mind space that is dedicated to the idea of the inconsistant behaviour of machines designed to behave consistantly.

In this setting, magic is largely a responsive, consistant interaction. If someone does Magic Input A at one end they get Magic Output A at the other. There are times we see characters get unpredictable results but it’s as a function of not understanding how to deliver the inputs. There are only a small number of these characters, these gods, and that scarcity means that the powers they have express them as characters specifically, but also, the things they have in common with their interaction with power show you how that power behaves for everyone.

There’s questions of continuity of data storage – is a child, replaced when memories are already fuzzy, and given as much of the memory as possible, effectively the same thing as the child that was lost?

There’s the Alks, who could be seen as a a computer virus: A self-replicating program that uses reliable existing resources to self-perpetuate. They make a copy of themselves, and that copy moves on. The only thing that stops the Alks from just replacing people wholesale is a survival instinct, to avoid society’s punishment. The magical universe allows a malicious, free-floating virus to create lifeforms instead of bitcoin cycles.

The Gods of Glory in the Thunder are hackers.

And it’s because, in part, the author knows how it feels to be a hacker.