I try not to make too big a deal out of the fact I like Breaking Bad and Better Call Saul. They’re pretty well made prestige TV, and they’re part of a modern ‘golden age of television’ that, thanks to the outing of the various people involved as abusers or the demonstration of whole waves of fans being awful or terrible endings has been revealed to be mostly coloured with piss. Breaking Bad is one of those shows where it seems that the people involved are broadly speaking pretty okay, and the worst thing about the work is the fandom.

Yes, the fandom full of people who wear Heisenberg t-shirts or who make fanart extolling that he is the one who knocks and unironically talk about him being ‘such a badass’ and how much they hate Skyler – it’s pretty easy to find anyone talking about these series where the comment section is full of people you’d be embarrassed to associate with.

Breaking Bad is a pretty great show about an awful man who shows that the one thing he could do to possibly earn a modicum of redemption is to spend his last day murdering as many Nazis as he could, and Better Call Saul is just letting Johnathan Banks and Bob Odenkirk just flex in a space that takes them seriously. I love those characters and because of it I love watching them do crimes, crimes that I am generally okay with. Hell, Better Call Saul brings in Michael Mando, the actor who played Vaas in Far Cry 3, who I remember remarking on as an actor I wanted to see in other stuff.

El Camino is a sort of clear Breaking Bad: Now There’s More Of It movie, and I’d normally say it’s kind of needless. Jesse was shown screaming off into the night in the last minutes of Breaking Bad, so what meaningful change is there from then to now? With the way Breaking Bad focused so scrupulously on extremely controlled people and situations (and then losing that control), it wasn’t as if I needed some followup to tell me ‘Jesse wound up okay in the end.’

It’s a victory lap of a story. It’s a story that just lets us hang around with Jesse a bit more, see some old familiar characters from Breaking Bad, and see the actors just… playing them more. It feels insulting to describe it this way but it feels a bit like there were a bunch of just extra footage sitting around, some slow boil stuff from the end and middle of Breaking Bad that was cut out and left aside because it didn’t really serve to focus the story on Walter ‘Fuck This Guy’ White. It makes it sound like this movie is unnecessary and made up of leftovers – a sort of narrative meatloaf, telling you things you already knew or could easily infer, and otherwise was treated as another chance to just hang around with these characters you’d already seen finish their stories.

I also kinda found it funny that it’s a movie with Aaron Paul about driving away from everything in a car ostensibly designed to be fast, which mostly reminded me of Need for Speed, a truly boring movie where Paul tried to set himself apart as a movie star. Since he’s been part of two of the most important TV shows of this current era (Bojack Horseman being the other one), it’s kind of weird to remember that his first big movie role was bad.

That means so far we have unnecessary and leftover and slow and featuring a lead actor who can’t carry a movie. None of these things are wrong. 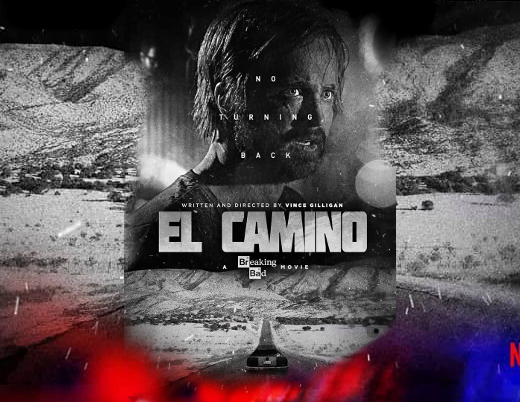 And now the ‘twist’ where this movie that didn’t need to happen and didn’t tell me anything important was still a movie I watched to the end and really enjoyed. It almost serves to dispel something of the myth of Breaking Bad: That the story was defined by its plot, that the slow transformation of Walter White was what made it compelling.

This is just a prestige drama made with a good sense of humour, pacing and tension by some really fantastic actors in roles ranging from big to small and just seeing them work around one another is excellent. Todd is not a likable character, but seeing him treating Jesse the way he does, and Jesse reacting to that is like watching a clockwork that’s slowly twisting into itself. The ‘disappearer’ and his unempathic professionalism, the abusive callousness of the nazis, Badger and Skinny Pete and the life they put together with the money they got – it’s just a flask of More Breaking Bad, and bonus it’s a flask that’s not going to spend its time feeding the kind of fans who want to shout abuse at Skyler.