I did not set out to become anything like a Star Trek expert when this whole thing started.

There was this new show, Discovery, and my friend wanted me to watch it with him, so I thought I’d check it out. Then he pointed out it references the Original series a lot and he wanted to share some of that with me, so we watched some episodes and I learned about Harry Mudd. Then like a comic fan, I picked at continuity and found an idle way to engage with the stuff when I had the time. I watched some of the Original Series and I watched some Next Generation and I remembered half-seen episodes from my childhood and I eventually, eventually, wound up watching Star Trek series in the background of doing work.

And in so doing, I watched all of Deep Space 9. Well, I watched most of Deep Space 9, but I skipped episodes because they were clearly going in a bad direction. It came highly recommended, with a lot of focus being put on how it has the best characters and arcs in a Star Trek.

The odds are good, based on the other stuff I’ve seen – including Discovery and Picard that that’s pretty close to true. It’s not better than Discovery, it’s not better made than Picard, but so far, taken as a whole, the seven-year run of Deep Space 9 has a lot of room to be considered the best Star Trek series. It was definitely the best Star Trek series up to that point, because it was able to have a more consistent moral framework, rather than the more syndication-driven, episode-to-episode short story format of the series that came before it. 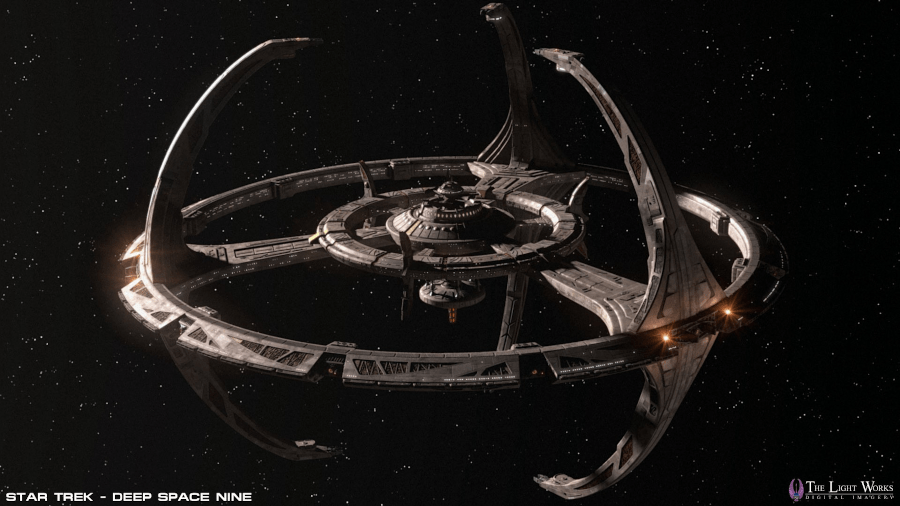 Okay, so your vital statistics; Star Trek: Deep Space 9 is a live action science-fiction TV series that aired from 1993 to 1999. It had a bunch of people involved in it, and tends to be seen as Michael Piller (at first) and then Ira Stephen Behr’s (until the end) work, under the auspices of a guy called Rick Berman, who sucks ass. It has a cast of fantastic actors, some of whom are given fantastic characters to play, and it attempts to present a coherent, interesting, whole story made  up of meaningful episodes, showing characters growing and developing in a space – ha ha – that you almost can only get through preposterous science fiction fuckery.

A colonial war of occupation by the straight-up-fucking-evil Cardassians has been ended, and in the tenative peace afterwards, the planet of Bajor is freed from their rule. Our heroes represent the peace brokers, the Federation, who come to the location to take ownership of a former Cardassian space station by Bajor, and handle the process of deconstructing colonial territory and help the reconstruction of Bajor. Once set up, our heroes find that there’s also a hitherto undiscovered trans-galactic wormhole that allows for travel and trade across the vast gulfs of space, and in that wormhole, our important officer captains find that there’s a group of alien superbeings that transcend time and space.

This is the first episode.

The story that unfolds after this point include our heroes watching as the Klingons, their allies, get into a war with the Cardassians, a rebellious faction of Starfleet that refuses to accept the peace treaty terms with the Cardassians, and the eventual discovery of how over on that other side of the wormhole, there’s a vast empire, bigger than anything our heroes had, and it wants to take over everything, with the help of again, the Cardassians.

This series is a big one, and I suppose what it deserves for this vastness, is that there’s a lot of stuff to talk about in it, and that stuff is interesting. Whatever I can say about this series, it stands out to me when it’s boring. As I write this, I’ve watched one season of Voyager, and was surprised to find that I’d managed to finish an entire season – it was so inconsequential, so content-light that I almost didn’t believe I’d seen that many episodes of it. By contrast, Deep Space 9 is a series of such scope I am very seriously considering doing articles on it that go season by season or even episode by episode based on the jokey memes I made while I watching it.

In the end, we only have so much time, and I can’t say I liked Star Trek: Deep Space 9 more than I liked Voltron, so maybe we’ll only get one or two articles out of kicking it around. Or maybe you’re going to see four or five Story Pile articles kicking this series around, we shall have to see. For now, this is our primer. 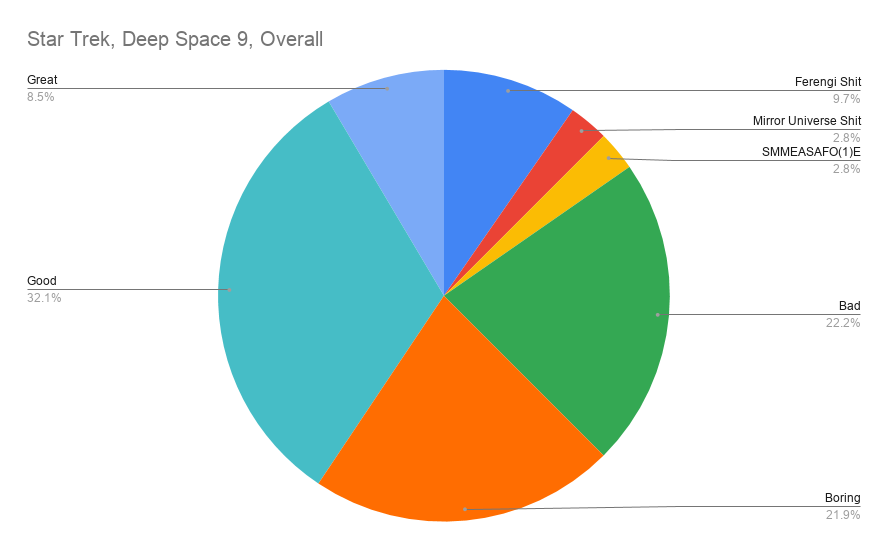 As I watched the series, I put episodes into a spreadsheet entry, marking whether I thought they were good, or bad, or boring, and then I started adding specialised fields. Particularly, there are a number of episodes of Deep Space 9 that are set in the Mirror Universe – a parallel universe that’s reasonably attainable, but where everything is a bit more evil and sucks. There are also episodes that lean heavily on the trope that Something Magical Made Everyone A Stupid Asshole For One (1) Episode. There are episodes that are about the Ferengi characters, who suck, and are bad, and who make everything worse by their presence, yes, even him, even your favourite Ferengi, #sorrynotsorry. These episodes are kind of the space filler of the series, and it’s not that they’re necessarily bad per se, it’s just that they by necessity tend to be more about saving money and done when the series wants to avoid introducing something new. They’re packing peanuts. They don’t matter and they generally don’t show you anything about who or what a character really is all about.

I did contemplate for a time approaching Deep Space 9 as a long form project, where I would take each season or episode one by one and just kick them around in a paragraph or so, but I think that’s a disservice to the work. Look, I want to take this show around the block for a kicking, and I will, but one of the reasons I want to take it around for a kicking is because this is perhaps the first Trek show where there’s long-term character arcs, greater plots and mythemes, and it’s not treated as a middle-spaced anthology storytelling.

It feels like I’m insulting Star Trek by saying it this way, but the fact is, Star Trek is a series that at its very core is a franchise about what you choose to ignore. It’s a science fiction series that routinely asks you to neglect actual, known science, or the impracticalities of how it tells its stories, or the way it’s choked by extrinsic factors like it’s financially impractical to concept actually futuristic interface design and then realise that in a live action television environment. It’s about pretending the dumb episodes didn’t happen, or the creepy stories weren’t really the important ones, that inconsistant characterisation is defined by when it fits this type and not that type.

What that means is that mostly, Star Trek fandom isn’t about an all consuming, provable truth that so many people seem to imagine it can be, with the classical image of the canon-absorbing, reference-and-fact-checked prove-it-every-time mindset. Star Trek is about enjoying narratives that give you interesting ideas and almost always, connects you to people you care about.