That – those four words – was my first draft for what I was going to say about Daredevil Season 3. I figured I’d have to expand out on it a bit, maybe you know, add some words and details, get into why I felt that way, but… but…

Do I? I mean really? 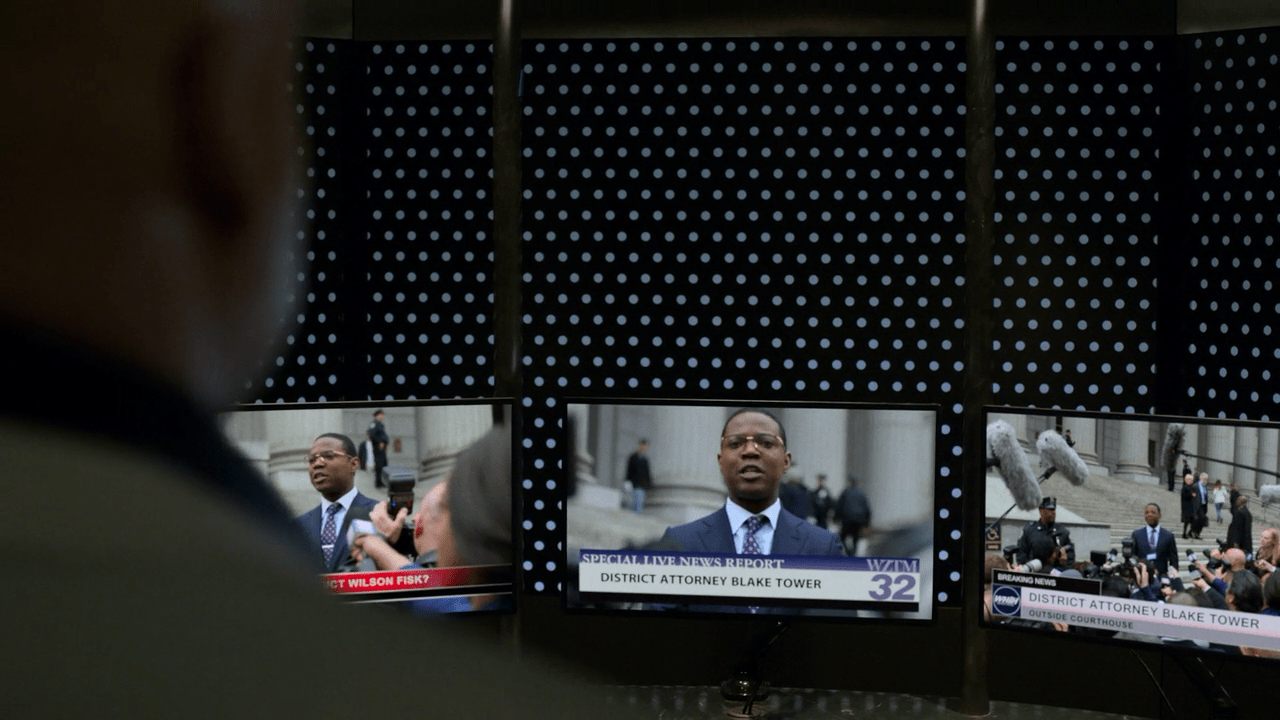 The story of Daredevil Season 3 is sort of a nothing. It’s the plot of maybe five good episodes, stretched out over thirteen through the addition of the unnecessary. The basic idea is that the Kingpin is betraying his criminal syndicate (or is he) and Daredevil has quit (or has he?) and there’s someone else using the Daredevil mask (definitely). It’s a really solid plot that’s been spread way too thin across too many episodes.

What’s strange is that this lack of content, this watering-down of plot, is normally something I associate with being cheap – you know, when you’re hurting for budget, you do cheap scenes that don’t necessarily mean much or advance the plot in any way to keep putting in time. You have two characters in a room recap something, or use a whole scene to show ‘this is taking time,’ multiple times. You avoid things that take a lot of effort to shoot, like elaborate fight scenes or impressive set-pieces or big celebrity talent and focus instead on things that are going to minimise your costs for maximum time.

Despite this set of techniques, though, Daredevil Season 3 doesn’t doesn’t feel cheap, even though once you think about it, it had to be cheap. It had to be cheap because there are so many of these sequences of people in rooms with dialogue. It’s a series about a crime-fighting superhero and most of what you see happens in dark spaces, in offices and hotel rooms, and it manages to fill all its spaces and sets with nothing happening because what kind of thing would happen? What would you put in a series about Daredevil?

It’s impressive really. It manages to hide its lack of budget beneath a thick coating of utter disdain. 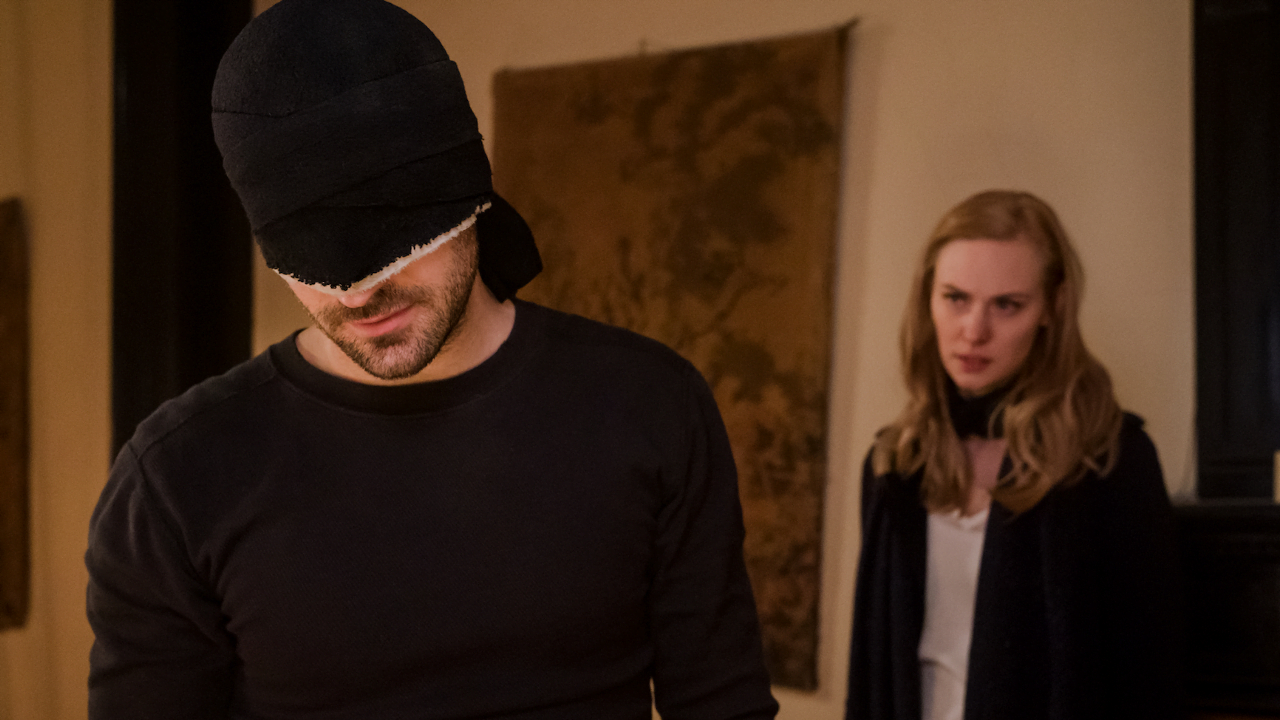 I’m only half-kidding here. There’s definitely enough time spent in Daredevil season 3 to talk about the things it wants to talk about, but I do feel that the series was mostly interested in being all sorts of things aside from being a superhero story about a character called Daredevil. It’s echoed in the extremely muddy framing of the series in its own advertising. That series tagline – Let the devil out – is such a chillingly excellent phrase, to me. That’s a great Daredevil story phrase. I want to watch that story.

This story spends time on a lot of backstory, backstory that kind of definitionally can’t be important. Daredevil’s birth is not something that should matter; he’s an ordinary person, whose senses were messed up by a chemical spill and who is, functionally, blind. He was poor and from a poor area, and all the lessons of that are conveyed already; we don’t need a backstory on his mother, because she was a normal human and Daredevil as a character is not actually all that informed by that origin point.

Remember that one of the points of the first series was that the police were corrupt, and Kingpin had control over them? Well, this season spends a lot of its screen time showing you that the police are corrupt and Kingpin has control over them. This is framed as tragic, as we’re shown the inner life of one of these very diverse and well intentioned FBI members, because we need to understand how corrupt cops are just good people being bullied by a crime wizard. I like Ray Nadeem but his presence continues Daredevil‘s gross fawning over the importance of The Cops.

Karen Page’s backstory – poor girl from a small town, it sucked, she left – is given a whole episode, with a whole cast of characters to paint the very important image of how The Small Town as American ideological footstool is in fact awful and sucks. Why it’s almost like being poor and remote isn’t actually fun or good, why would someone choose to leave such an idyllic lifestyle.

Karen really swallows whole chunks of this story, which is a twofold problem for me because it means there is at least one (1) woman in this series who is a proactive entity not designed to be a bit part in someone else’s story and killed or threatened to motivate a man, and she’s also really boring and I hate when the story settles on her. The story wants to use her as a plucky girl detective, getting involved, getting the information at the root of the corruption, but she doesn’t, because she can’t, and instead she’s used as a pawn for other people’s games. Her single most proactive action makes her into an object for people to move around! 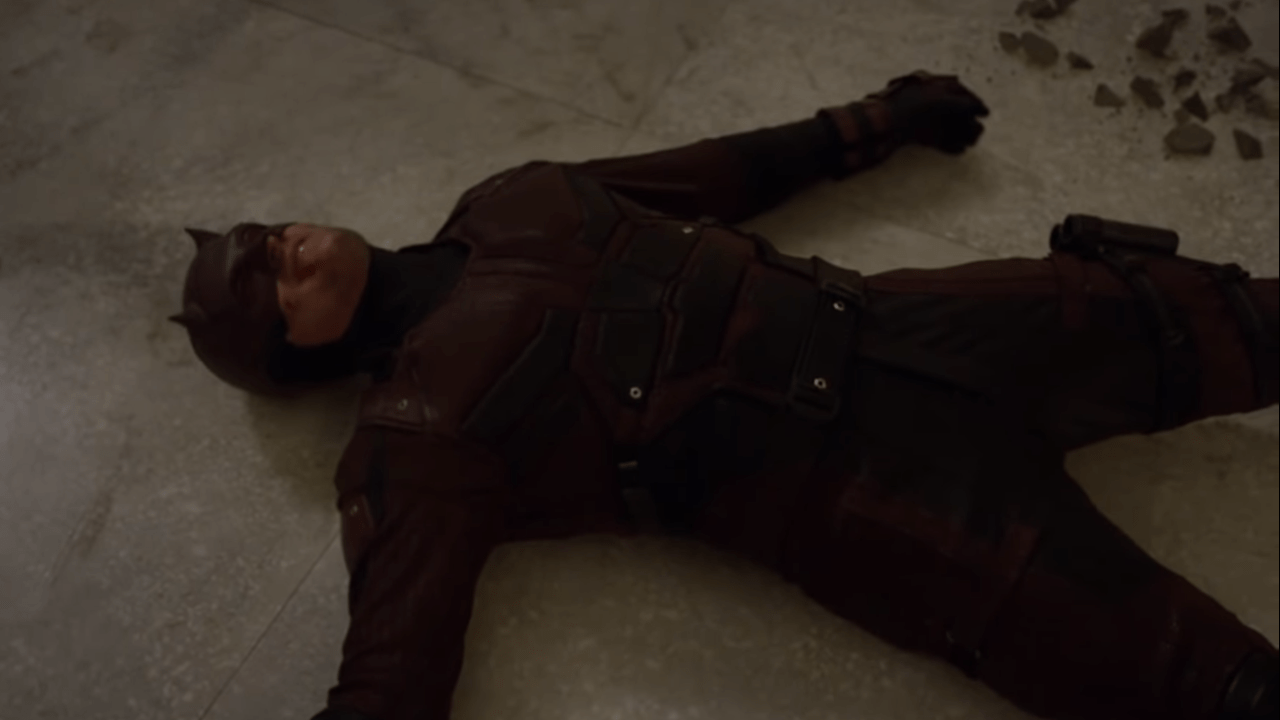 Let’s talk about Bullseye for a moment.

Bullseye, in the comics, is a violence cryptid. Where he comes from, what his powers derive from, that’s all left completely out of context. Bullseye doesn’t even have a name and he doesn’t need one because his motivation is meaningless. You don’t need to understand why Bullseye does the things he does, because what he’s doing is killing a target and giving you a really cool series of fights. Bullseye appears, opposes, and he has enough personality and interest in what he’s doing that you don’t need anything else.

Daredevil Season 3 doesn’t trust us with that, though, so instead we have to be introduced to Bullseye over three episodes, because we need some explanation for why Bullseye. This is totally unnecessary! Bullseye doesn’t need an explanation, he needs an interaction. Understanding who comics Bullseye is won’t stop him, or even give you insight into how to stop him!

There’s a bunch of stuff in Bullseye’s story I hate here. There’s the way he doesn’t have a costume, the way he doesn’t use the name Bullseye (and instead goes for the far cooler ‘Dex’). There’s the way his story is basically about finding women who can be fridged for his development, the way that his skill and competence at fighting has to be directly tied to the military as too many forms of power do in the Marvel Cinematic Universe.

Oh, there’s also the extremely cool and comfortable way he depicts troubled people with childhood trauma who struggle with violence, especially because the only thing they suggest kept Matt off that same path was the Catholic church.

They just don’t know how to handle Bullseye here.

Fight choreography backs up Bullseye being a badass, at least. He gets to be really cool in the three scenes we really get to see him fight. It’s pretty consistant that if he has range on an opponent he’s very hard to reach and he can control a big area, so you have to think around how to close with him. The times someone closes with him, they mess him up. Good work there!

I just wish they’d stopped trying to explain him and just revelled in his badness. Have him show up as an external problem. Have the great betrayal that makes him change sides and come after Fisk at the end be the discovery that he’s not or can’t be getting paid! Don’t tell me Bullseye is a Sad Angry Boy Who Just Wants His Parents To Love Him, And Now He’s Been Pushed Over The Edge By The Murder Of The Girl HE WAS STALKING. That’s not sympathetic! That’s creepy as hell! And you keep killing girls to motivate guys and it’s not good!

There’s other stuff. There’s too much other stuff. I mean fight choreography in this series is generally good – we get another, bigger, better corridor fight, which makes me feel like the people who make these series just really want to stage fights in corridors. 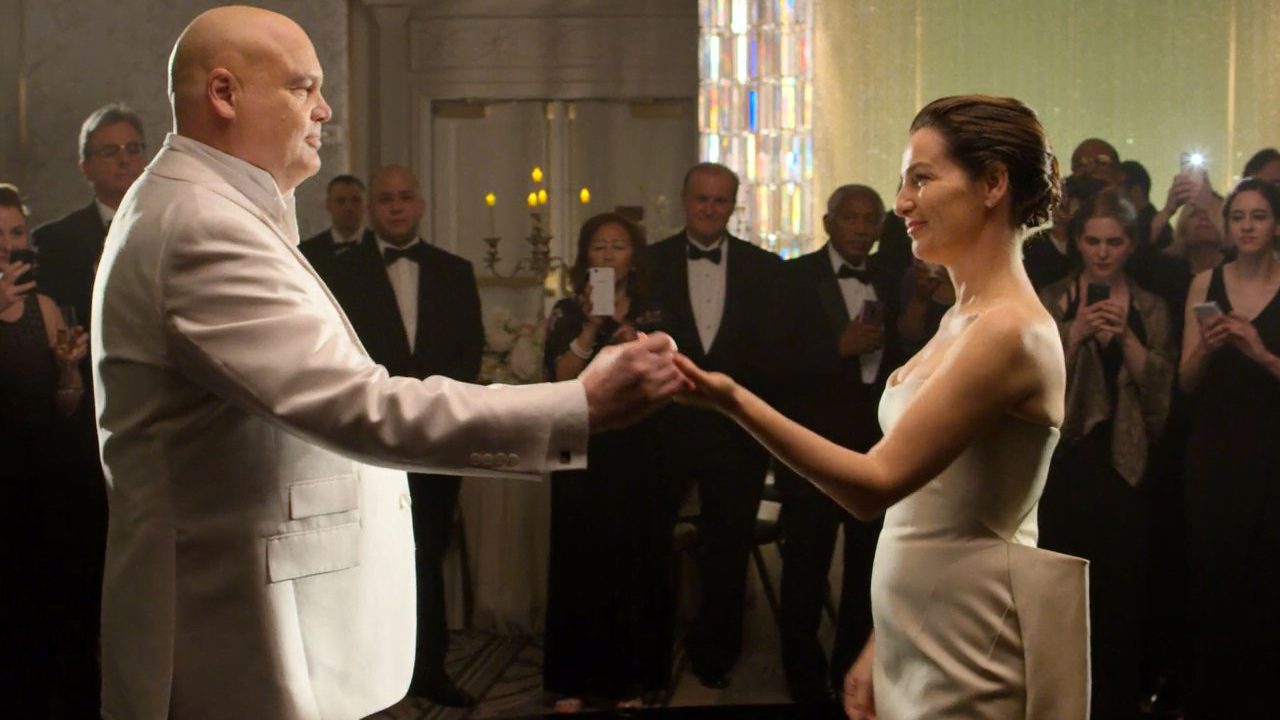 Vanessa turns up in this series just long enough, like just long enough to make it clear to the audience that she’s a total asshole. Gone is the ambiguous, crypto-curious art curator who can appreciate wealth and privilege, but who sought distance from the rougher, threatening elements of Fisk’s life. No, now she’s just an utter jerk and just as bad as Fisk.

This is just before threatening her becomes the lynchpin of Matt’s final plan. A plan in which, it is important, Fisk must live, to show the system works, after showing for a third time that the system does not. Bonus: if Fisk can corruptly free himself from prison, what’s going to stop him from corruptly freeing Vanessa from Matt’s reach? What exactly is going to stop him from just sending her to some lovely Latin American country that doesn’t care about Daredevil, taking over the police force a fourth time, and killing Page and Foggy and Matt? Scout’s honour? You have to work to show the ways your characters can do the things you tell us they do, show! 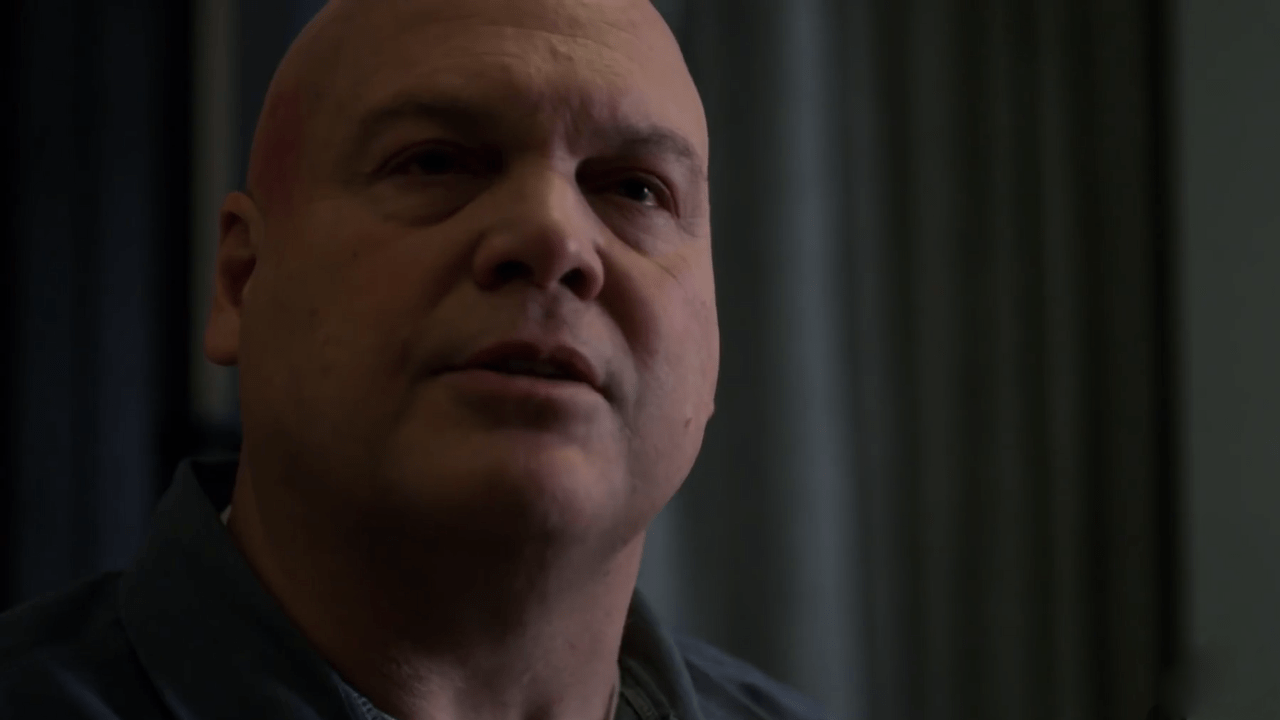 I’m still brought back to this series that after two seasons of questioning Should Daredevil Even Daredevil, they thought the best story they had to hook a season around was to have Daredevil question if he should even be Daredevil. The story wants us to ask questions about the justified use of violence but it just settles back at the same wishy-washy place it always does – that killing a monster makes you into a monster. After all, is it not said that we cannot stop forest fires, lest we become forest fires ourselves?

Like, you’ve got to establish a norm before you can disrupt it! The only norm this series seems to have is Daredevil constantly asking ‘but what if I don’t?‘ Nothing quite like watching a superhero series that doesn’t want itself to exist! Maybe next episode we’ll get brooding on the quandrary of ‘how will I know how to stop violence if I do violence‘ and maybe some half-hearted catholic platitudes about peace from a church whose own holy books have stories of a man who wandered into the night and murdered a thousand men with a stick.

I’m not saying that Daredevil is a character who should kill. He shouldn’t. I think he’s very boring if he kills people. What I’m saying is this whole series wants to give sinew to the question of why not kill and never actually comes down on any of the actual reasons that it can justify for not killing. The closest we can get is the obssessive need from Matt that the system has to work, three seasons into proof the system doesn’t work.

We’re meant to feel no qualms about the corrupt cops Dex kills in his final rampage, who were assholes, but see Nadeem’s death as tragic. We are to see evil in Fisk who threatened Karen Page, but rejoice in Daredevil finding the strength to threaten a woman. 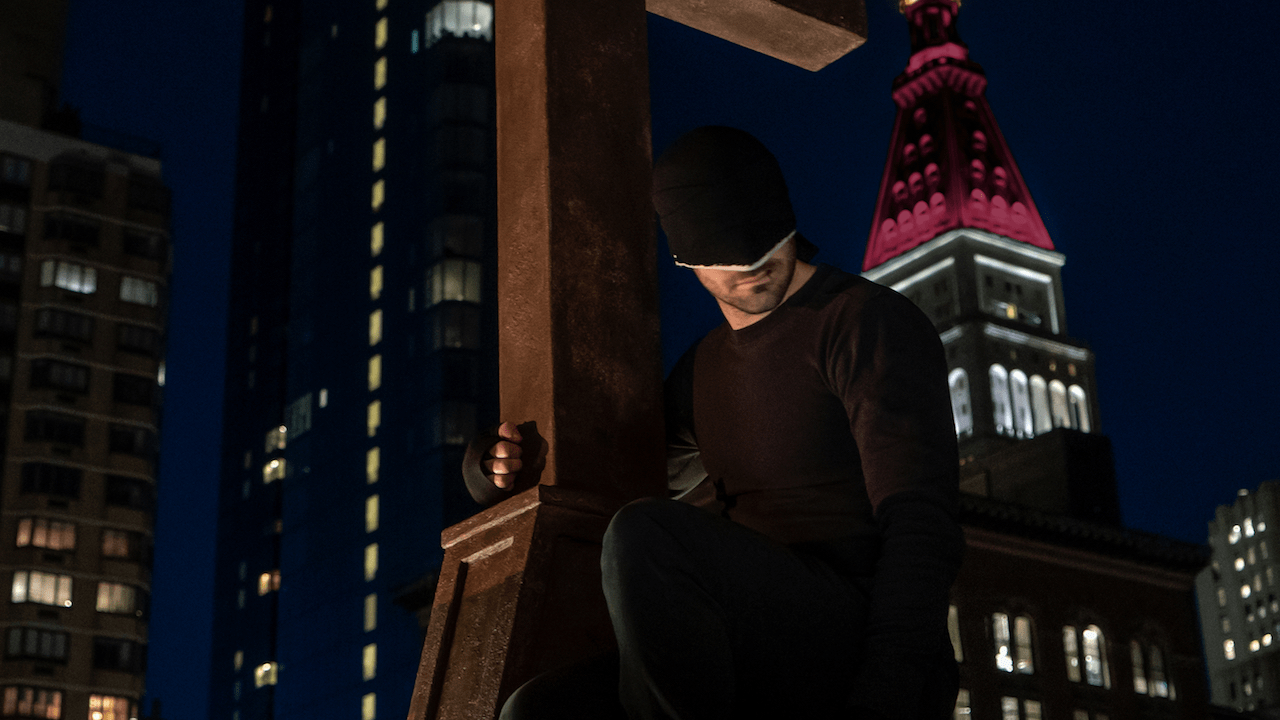 I think the thing that codifies this series’ efforts to have meaning without wanting to do the things to earn it, that underscores this is the boast Matt makes as he finally ‘beats’ Fisk (and straight up, that last fight is really cool, praise where it’s due). As he’s glorying in his victory over Fisk, Matt yanks off his mask and says, “This city rejected you.”

You don’t speak for the city, Matt.

The city gives itself to Fisk’s corruption.

Time, and time again, we’re shown, everyone in this city is corruptable. Everyone crumbles. What won’t be taken will be destroyed.

And in the face of this, you take the Kingpin at his word.