BNA or BNA: Brand New Animal or Oh No I Guess I’m Hot For A Tanuki Girl Now Does This Make Me a Furry is a 2020 anime from Studio Trigger, the people you recognise the second you see their animation work, formerly of Kill La Kill, Little Witch Academia, DARLING in the FRANXX, SSSS.GRIDMAN, Promare, and a ton of other work including Indivisible, Flip Flappers, KILLER SHERLOCK, Akame ga Kill!, Steven Universe, Sword Art Online, and Space Dandy, and only one of them I made up.

BNA starts out with a tanuki girl crossing the boundary from conventional society to make her way to Anima City, the one city on earth, we’re informed, where human-animal hybrid shapeshifters can live, outside of the oppression of people who don’t transform, and therefore, view those who do with a sort of fundamental dehumanising horror. It’s, you know, furry racism, except handled a little bit less embarrassingly than normal. 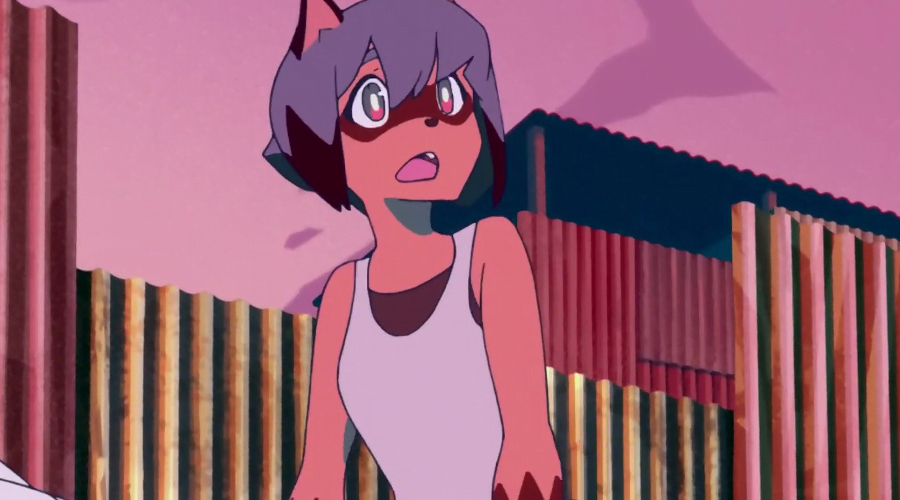 First up, when I say ‘Furry,’ in this context, I’m referring to anthropomorphic animals that behave, more or less, like recognisable humans but whose animal traits are used to explore or explicate something about human cultures or the way they behave or are different. Animalising humans and anthropmorphising animals is rudimentary metaphor, it’s something we’ve been doing so long some people don’t even realise they’re doing it. Think about when someone grins wolfishly or paws at someone, bucks up, bulls through, or bears down.

In Art Spiegelman’s holocaust fiction graphic novel Maus (and, if you are of the academic tradition that does not want to classify Maus as holocaust fiction, okay, you win, I am not equipped for that argument), humans are depictred as anthropomorphic animals, to represent ingroups and the ways that people could clearly perceive one another’s belonging. In Maus, Jews are depicted as mice, and Nazis as cats, so the metaphor is extremely on the nose, like, this isn’t being used for subtle communication.

This isn’t a new idea at all, of course – in Fantasia, Disney depict caucasian centaurs as being part horse, but the dark-skinned centaurs are part zebra. This is super common, for creators to use the animalian groupings to depict the boundaries of cultures and therefore, possible intersections of those groups.

All of which is the twenty five cent way to phrase ‘some people use furries to talk about racism.’

Since a large body of furry media has been in the amateur and lower-end professional creative space, this means that furry media that has tried to grapple with these distinctions ranges from the well intentioned and incompetent to the outright mendacious. Lemme summarise again: Lots of furry art about racism is fucking shit.

Is BNA one of those? No, but it doesn’t try and do a heartfelt story about the brown cats and the white dogs having deeply intense emotional conflicts based around a lack of mutual trust that is the only element to their animosity, at least until such time as a panda moves in down the road and gets blamed for the pandemic.

(“Why else would they call it a panda-emic?” would be a punchline in that webcomic rendition of this story beat.) 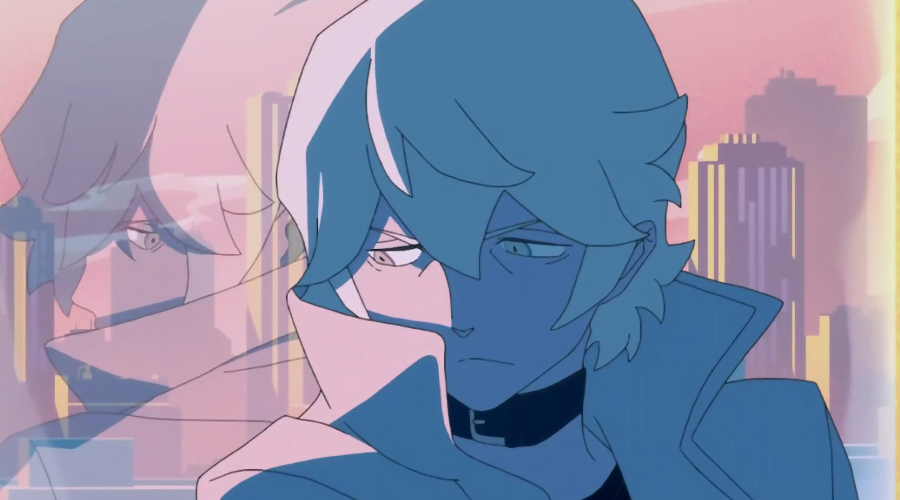 The characters in BNA are all (well with an exception or two) shapeshifting animal people. This means everyone gets to be depicted as both a human and an animal, with similarity between their two forms. It’s great and it kind of underscores why the anthro animal is such an appealing type of character design to work with. You get to both metaphorise how a character behaves, and present in that character, a bunch of different options for how that character could be seen or treated, and then have them react to that. Each character gets to be a synthesis of an antithesis and a thesis, if you want to get all Hegalian about it.

In BNA, this is used to great effect, and Studio Trigger’s particular aesthetic for wide, highly dynamic, kind of cartoony aesthetics works really well together. There’s a thieving weasel (who insists she’s a mink, a detail I love). There’s an enormous kingpin style reference who’s a killer whale, and mean girl flamingos. There’s a lot they do with this animal element of character design.

Our protagonist is a tanuki girl, and along with that there seems to be a bunch of ridiculous flexible body nonsense, where, for plot reasons I won’t go in on here, she can grow her arms and tails and fly or bounce or – like, she’s a Tanuki, it makes sense, don’t worry about it. It also surprises her, which ties into another thing that Studio Trigger do really well. 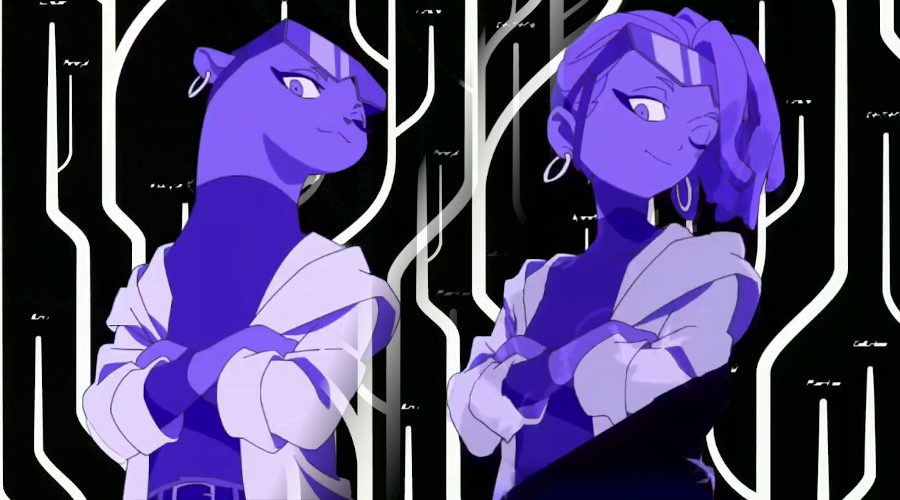 The thing with the way Trigger animate is that that cartoonish flexibility plays into the way that Trigger do faces. If you’re, like me, old, you may remember when anime expressions were prone to a lot of rapid fire changes, that sort of ‘WAAAAAH!’ pantomiming that’s meant to convey sharp, dramatic transitions between emotional states and which was used for some truly excellent comic moments… if you could fall into the emotional language of the anime and forgive the way these rough, cheap animations tended to make things a bit, as the youths might say, cringe.

Studio Trigger seems to live in the space of ‘what if we took those old cheap animations and just put all the missing frames back?’ And the result is breathtaking.

The series works really well with their style, but also the length. I feel that one problem a lot of anime has is that they either need books’ worth of time to do their worldbuilding (or, you know, a whole videogame’s, like most adaptations) and the result is an anime with choppy pacing or underexplained narrative. Or you get an idea that works for a webcomic stretched out into thirteen episodes and the characters hook up at episode six and suddenly the rest of the series is just filling out backstory for other characters who you weren’t that interested in at the time. Pacing is hard, and some ideas that fit a series don’t when you try, and some ideas that fit a movie don’t when you try.

BNA is somehow perfectly sized at 12 episodes. There’s room for some comedic interludes, setting up the mystery, and it culminates beautifully in a wave beam laser fight and a great do or die, unlikely heroes, courage at the last minute kind of culmination to the whole thing. It’s not paced tight – but it is paced well, which for anime is often more than enough. 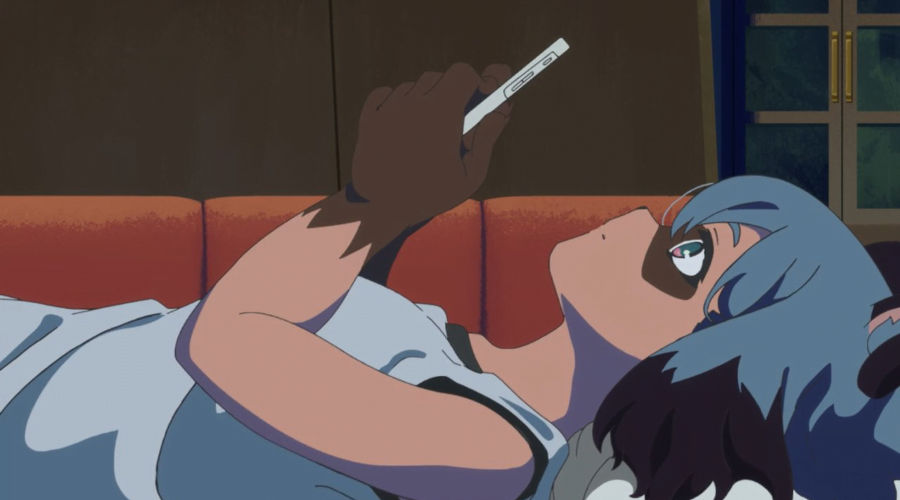 I like the story that BNA tells, not just because of what it fails to mess up, though. I like what it actually wants to do, and what the story seems to think of as ‘good’ targets.

See, let’s set aside the fantastic racism, which this story doesn’t seem to want to spend too much of its time examining from the outside. Like, there’s a pretty clear narrative, consistently examined: Humans hating furries is bad, and it’s not something where the furries need to learn to be less furry.  What’s more, while there are definitely problems within Anima city, with corrupt scientists and criminals making life harder for people, it is absolutely explicated that these people are responding to deprivation and pressures outside the city.

Each of those pressures comes from other sources, sources that range from condescendingly positive to politically negative. And when you dig into it, you find the powers above those powers. You find the people manipulating that. You find the sources of these problems.

And then, you find where those problems are coming from. You find what the story thinks of as the enemies the story should be fighting against.

Politicians who support the marginalised for appearance’s sake but collaborate with their removal.

And those marginalised, who through being ‘respectable,’ think that the marginalised’s purpose is to cede to them. 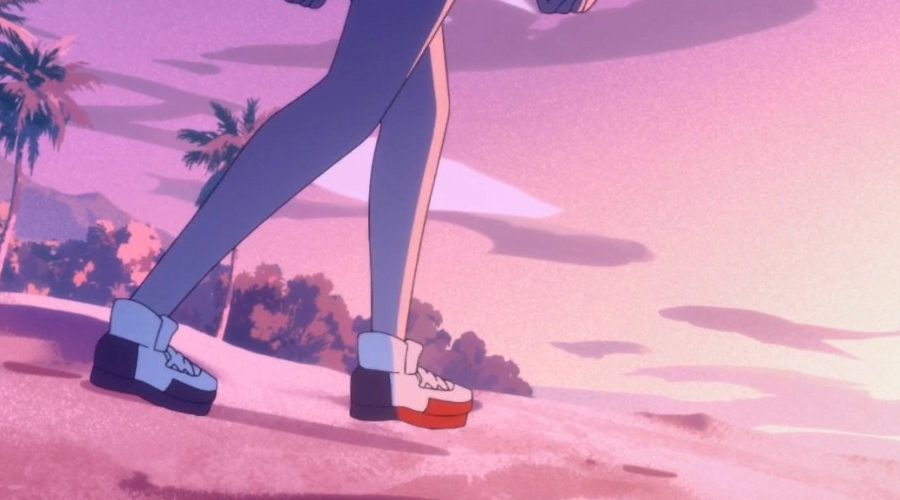