At its core, Atomic Blonde is an excitingly familiar type of movie. It’s one of those Sunset Noir stories I like, with contrast-driven high-society low-life all outlined in the bright nimbus of neon colours. Where much of Sunset Noir works around the tension between the extreme wealth owned by powerful criminals, existing in spaces without what we think of as a normal safety net, a society that doesn’t have the protections of society, Atomic Blonde uses that contrast to show us a spy thriller, set in Berlin, 1989, a week before the collapse of the Berlin Wall.

The spies have enormous power; unreasonable power. The stakes for what they’re doing are so high that nothing is beneath them. They can steal and kill, money is not an object, but unique items, specific and unreplicated objects, those are important, and people will do anything for them.

What ensues is the slow cook of spy drama, where you watch long periods of tension building before erupting in sudden, startling action sequences of high-impact violence. The violence in Atomic Blonde is not your clean-quick-pretty violence of a two-fisted adventure hero, it’s not James Bond stories, stories that sell themselves on a sort of manly macho idea of violence as about tousled shirts and single blows to the face, and a single thwp bullet ending the fight forever.

No, Atomic Blonde orients itself around a depiction of violence that is both extremely difficult to make, with excellently choreographed chaos, objects being grabbed and used mid-fight, scrabbling for purchase, guns used in close range and people surviving the shot unless it’s in the face.

Oh, and our main character is Charlize Theron playing a woman called Lorraine Broughton, a bisexual woman of violence who has been sent into this city in two halves that represents the war between two meaninglessly different sides and she’s so great. 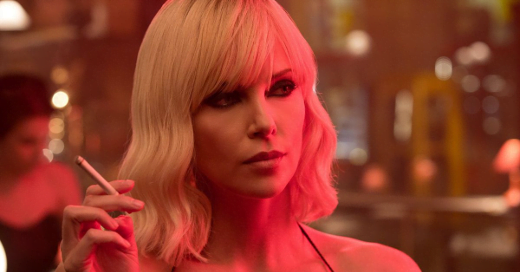 This is kind of the sort of thing I realised I want to talk about in Pride Month, because I don’t think the stories that already existed and that I already enjoyed but did exclude us were fundamentally flawed stories. I didn’t think being shown a world without me in it was solved by acting as if the stories themselves were to blame.

I feel sometimes that queer readings of literature require us to take stories that at their root are about the people we can cheer for doing the things we want done against the people we think are assholes and say that no; no, these things were made in service of capitalism, or the patriarchy, or whatever, and therefore it’s not just that these stories are bad or could be improved, it’s that these stories are fundamentally inferior stories. And from there, we tend to get the Queer Stories being isolated to the extremely personal, extremely intense, ‘complex’ space, the obtuse with heavily coded messages, or the explicitly sexual. None of which are bad, but all of which feel like bad fits for this blog.

What we have here, however, in Atomic Blonde is a straight up bad-ass spy thriller boiler of a story, with a good central theme, a great narrative loop, incredible action scenes, a bunch of realised characters, and the main character is a bisexual woman. It’s a movie with enough twists and turns that I don’t want to talk too much about the details of the plot, but nothing makes her bisexuality a negative trait nor is it presented as a unique weakness.

I like adventure. I like pulp. I like horror and I like heroics and I think one of the ways we fail ourselves in queer media spaces is by accepting the kyriarchal and patriarchal idea that the works that are for people to enjoy are not works for us. 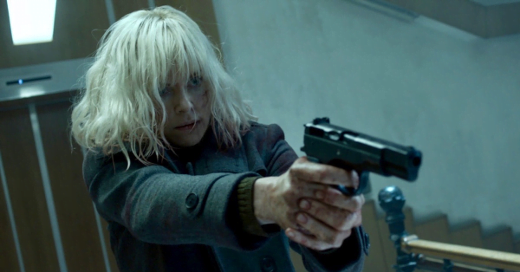 The story’s a bummer – sorry. I mean, not much of a bummer, to me? The main character tells us the story in hindsight so you can kind of put together that she’s going to live through it, but that tension reducer doesn’t make the rest of the story un-tense. You’re not worried about if she can survive, you’re trying to work out which of these characters you might like that you can feel safe liking. Whether or not a character is a bastard or on the wrong side or doomed is pretty deftly handled, and I know I had that hold-your-breath worry about two of these characters.

One other detail about this movie I really like is that Broughton’s bisexuality is effectively, a change from the original text. In the original story, The Coldest City, the French contact is not a woman; in this, she is, and without changing the rest of the plot, the story works just fine, and another duality is added to the imagery of a story that is overwhelmingly already about the tension between two things that are not meaningfully different.

I liked this movie, and I think that if you like Sunset Noir and you like the tension of big forces crushing against one another as expressed by a tiny number of people punching each other in the face in the name of surviving just to the end of this fight, you will like it too.