It’s something of a meme that ‘light novel series’ is a subgenre of anime that throws up some warning signs. It shouldn’t – after all, two of my favourite anime of all time are both from light novels, but traditionally the field of light novels are known as being primarily harem or isekai anime, often being quickly produced to cash in on recognisable or marketable characters. Often these characters have some particular visual motif that makes them very recognisable and makes for good merch opportunities. Well, Ascendance of a Bookworm is an anime that started its life as a series of light novels, and it is an isekai, and it features a recognisable main character who has a lot of good merch opportunities.

The premise! Urano Mototsu, college nerd and bibliophile dies in a hilarious bookshelf-collapsing incident during an earthquake. Upon her death, she wakes up in a new body, in a fantasy kingdom, which should be considered rather rad, except Urano was not someone who lusted after adventure in fantasy kingdoms, she lusted after books which are pointedly absent in this fantasy kingdom, and her new body, Myne, is also five years old.

What you then follow is a sequence of narratives about a five year old girl personally trying to catapult herself up the tech tree in order to have access to books, even if she has to prompt industrial revolutions to do it. 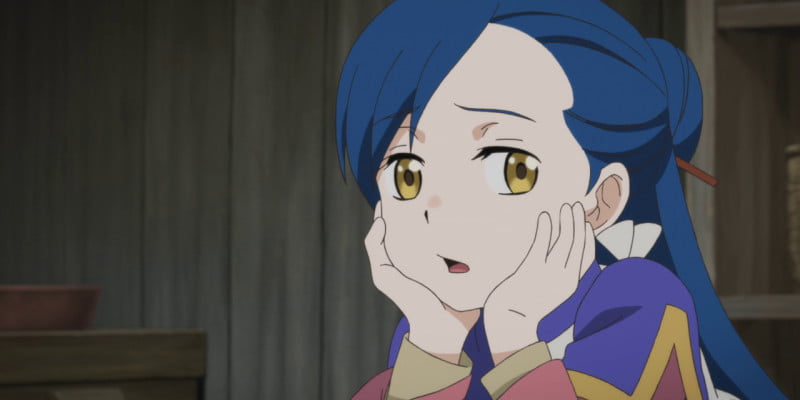 I like this series. I enjoy the idea of it, and I like the subject matter it chooses to be about. Traditional views of isekai series is that they’re power fantasies – whereas Bookworm is sort of a disempowerment fantasy? A full grown, well educated adult from our world waking up in a fantasy universe that lacks much of our infrastructure could, very reasonably, change the world with a backlog of easily transferred information. In Bookworm, though, Myne has to struggle to do things like work with clay tablets, or go for long walks.

I’ve come to appreciate stories where character’s tensions and problems come not from things like anger over miscommunications but rather reasonable reactions to complicated situations. In that, Bookworm is a really good story, where Myne’s biggest problems are all about being taken seriously as a five year old and then immediately needing to be careful about what being taken seriously could mean. After all, if a five year old peasant had access to all the most valuable knowledge in the world, what exactly stops a noble from taking them? 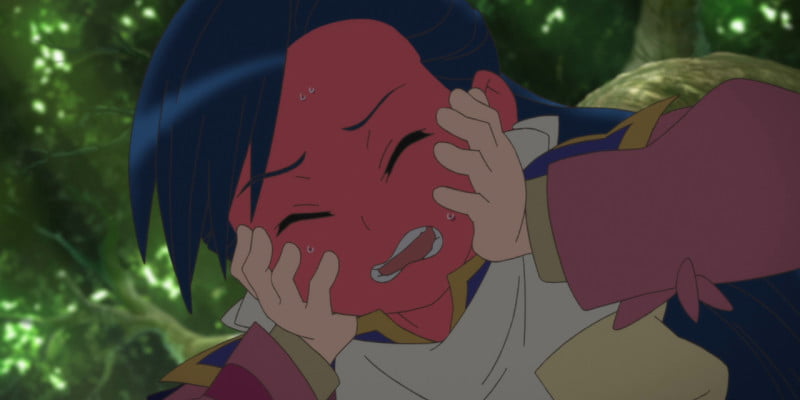 There’s a lot to be said for what Bookworm doesn’t do. The world may be vast, but we mostly spend our time in one city. The problems may seem easy if you skirt over the basic infrastructure like literacy, but then the series doesn’t skirt over literacy.

Also, I like Myne a lot? She’s charming and she’s sweet and she’s goodnatured (in the anime) and it makes it easier to have empathy for her shortcomings because she’s in such an impossible seeming situation. This is apparently a chance from the books, where she started out with a somewhat negative vision of her family at first, believing them to be ‘fake’ and not really being properly attached to them despite them doing all the work of feeding her and keeping her alive and listening to her. 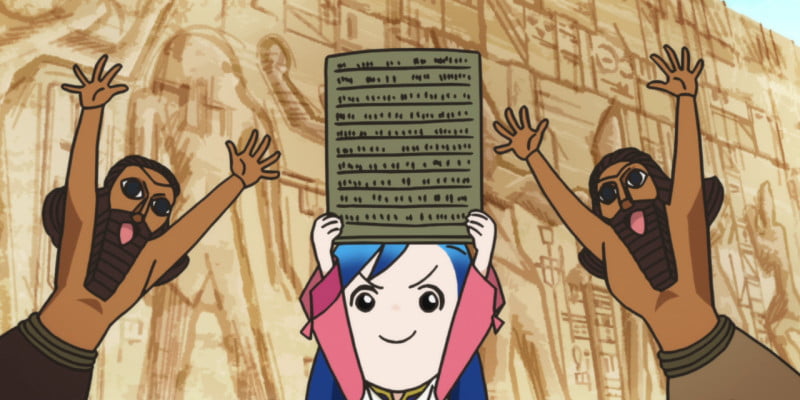 Something I like a lot about Bookworm as a series is the way that it shows a non-teleological vision of the world. There is not a singular arc of history in Bookworm that works backwards through the storytelling space; there are ways in which the technology of the time could be considered anachronistic, but which make sense in the context. This is a population which has access to some of our technologies we consider medieval, some we consider advanced, and they all are justifiable with the technology they have available to them and the incentives around them.

Now, part of how it does this is magic! There are magical freezy fruits, and fast-growing fronds that make for good paper, and there’s magical binding and contracts that make the job of contract law and clerks extremely important. There’s also the way that some sources control the population through narratives pertaining to magic – you know, like the church does.

It’s also an interesting example of how many things can be done with lower levels of technology, but without systems of incentive to distribute them, they may never be produced at scale to be viable. Woodblock printing can be done very cheaply if you have access to the right kinds of wood, ink, paper and carving tools, but the expertise involved for the production of a single book means that it may be easier to just copy the book point by point, right? 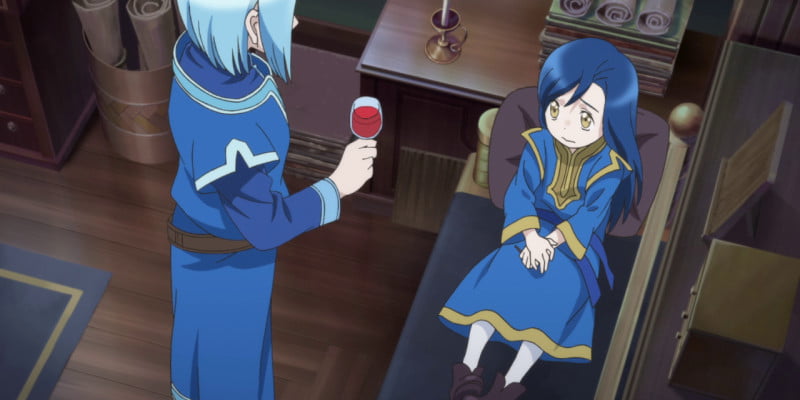 None of this is to say that Bookworm is a perfect series at all! Particularly as it reflects on Myne and the culture she finds herself, there are some mildly irritating things. Particularly, Myne starts out being extremely anti-poverty and quite radical in her charity, giving away things and ideas for the community around her to improve their lives, but as she starts to accrue money, she starts to look at capitalist systems to solve problems.

In the novels, there’s also this undercurrent of how much of a little twerp Myne is to her family, having to go through a literal plot arc to recognise that ‘maybe it would be good to be nice to my mom.’ This is compounded in the anime towards the end of the second season, where she has to reconcile all this time spent in this life with realising how she feels about the loss of her previous mother. That’s a bummer for the Bad Mom Feels crowd. 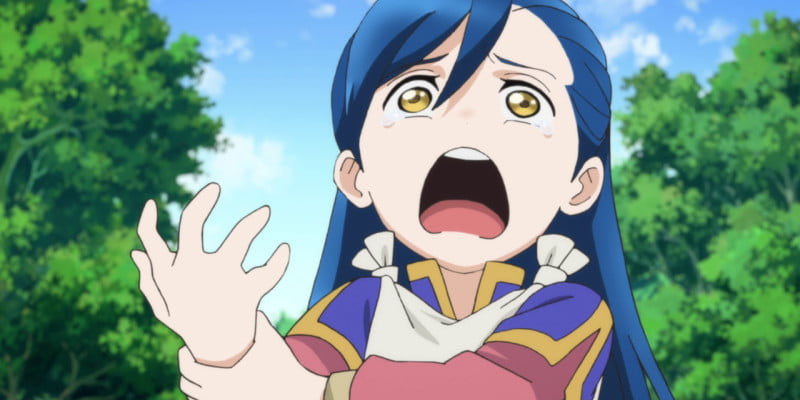 There’s this watchword in the church that is borrowed, it seems from the King James bible (2 Thessalonians, I think), if a man does not work, neither should he eat. This is protestant exploitative nonsense, and it’s the kind of verse that gets trotted out by the worst kinds of Christians to try and dumpster on the poor, the homeless, the infirm and the suffering, to try and turn them into stockbrokers who know how to program. It’s also a phrase that Myne repeats, having learned it in church.

There’s also a way that the story structures itself into arcs, where first the question is a quest for paper, then a quest for power and money in the middle class, and then political maneuvering in the church’s highest levels of power. This is interesting to me because it moves through multiple types of narrative without overstaying its welcome in any of them, but if you signed up primarily to watch a little girl push her poor community up the tech tree singlehandedly, this is going to be a disappointment; you are going to run out of the story doing that.

The third arc concludes with the prominence of the magic system, which may feel to you like a bit of a waste of time and effort. After all, the magic system probably can be used to solve all those previous problem, right? Well, we’ll find out. 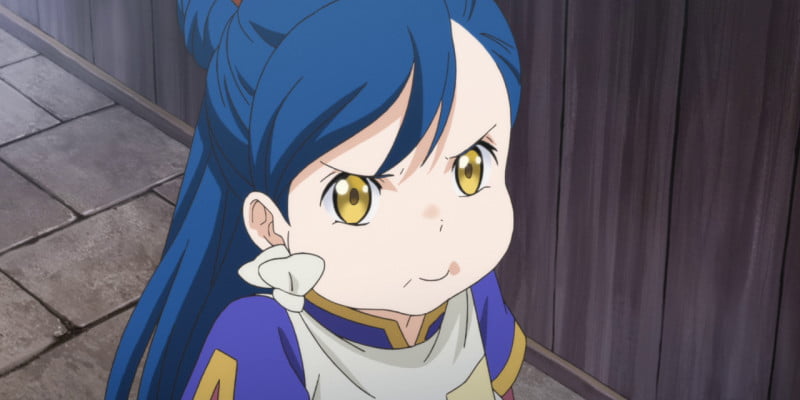 I really enjoyed this series and I will watch a third season when it comes out. Myne reminds me of my friends, who are extremely focused on technical tasks and would really appreciate a life of wearing pretty dresses and lauded for being experts on some niche nerd element while not contending with being regarded as Having To Be An Adult. There’s an interesting and sophisticated vision of worldbuilding, there’s detail to be indulged, and the characters in this space are so well wrought that you can learn about them from invisible ink between one another.

Highly recommended, I really enjoyed it, it’s about books and nerdiness and tragically capitalism gets involved.

Oh and one final detail, the expressions in this anime are super well done, just some top tier memeable faces here.