The narrative of the fans goes that this is where Jimmy found his own identity; where he became Jimmy Buffett, and explored the space that we now sometimes call Gulf and Western. It’s where Jimmy took on a very easygoing island nature, talking about beaches and boats and distance – not so much focusing on hard work and guns and roots the way that country tended to, but instead more about a sort of disconnected drifting. 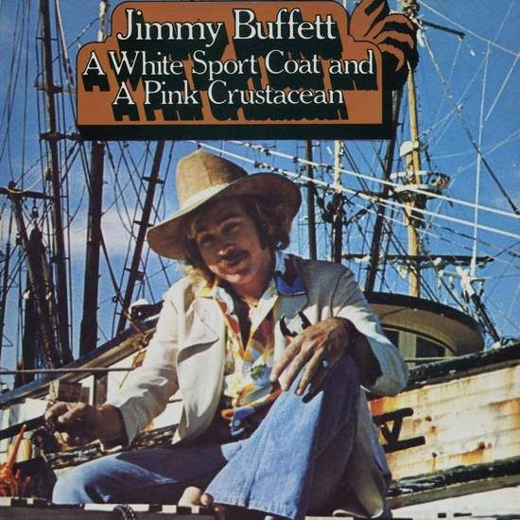 The thing is, this narrative – that here’s where Jimmy found the ocean – is kinda weird when you listen to the opening of the album. It starts with a song that feels like a different kind of experiment in hindsight. The Great Filling Station Holdup is a pretty classic country loser story, some outlaw country, but the outlaws in question are idiots who suck and get caught immediately. It’s a funny song, singable, and it’s also pleasantly brief. It matches with a later song on the album, The Peanut Butter Conspiracy, which talks about how Jimmy used to shoplift when he was poor. It’s kind of fun when Jimmy talks about ‘crime’ that centers himself because even his fictional crimes aren’t cool. They’re just dorky.

The followup, Railroad Lady is a really old, classic style song, made by Jimmy and Jerry Jeff Walker, the writer of the song Mr Bojangles. It’s again, experimental; this isn’t a song about the ocean and easygoing life. It’s talking about the death of the railroad and how it was possible to literally live on them, about how there was this whole wandering lifestyle that worked in such a strange way. This song is like a little serving on the A side for what closes the B side: there are some introspective, sad-sounding songs about winding down.

Jimmy writes about being old and tired and settling down, but it’s pretty worth noting that this album came out when he was twenty seven, so, you know, pump the brakes there Jimbleson Buffettersville.

Then there’s He Went To Paris, a song told in hindsight. It’s a pretty typical kind of country song – the old man sitting and crying and talking about what’s gone. But it’s a song that reaches its arms so wide, talks of travel so far, and uses (for example) the steel drums as a sort of long, soft weeping of the story. It’s beautiful and it’s sad, and it winds its way around to the beach, and paints a sort of future that Jimmy seemingly has decided to grow into. It’s not at all a unique song, there are so many like it, but none of the ones like it feel the same, to me. You can find dozens of country songs about old men reflecting on their lives. You can’t find many that feel as perfect as this.

Grapefruit, Juicy Fruit is the hit from this album, which I don’t get at all. I mean I’m glad there was a hit so he kept making them, but it’s a song I find infinitely forgettable. It almost feels like a song that’s more about the Coral Reefer band getting to play around with sounds. It’s boopidy doopidy and it’s not bad, I just don’t care.

Cuban Crime of Passage is – okay. So brace here. There’s a yikes. There’s a yikes where the woman central to the story is described as ‘half woman, half child, she drove him half wild.’ That’s pretty yikes. I assume this means she was a grown woman but it’s not the kind of framing I like. Still, I like it, it’s singable, and it does have that little underscore that no matter what goes on in Cuba, the whole life of people is reduced to just footnotes, discarded and forgotten to America. It’s a weird twist in the chorus, honestly, because it’s not like Jimmy seems to be positioning himself as above that.

Why Don’t We Get Drunk (And Screw) is a parody song. It’s meant to be a riff on the whole structure of ‘the love song’ on the radio, and it was part of Jimmy’s standard ongoing beef with the radio, which generally didn’t give him a lot of success. It’s also weird that people seem to now think of it unironically. It’s a song he’s revised a lot, including a kid’s version, Why Don’t We Drink Milk At School. I never heard this one growing up, seems dad was willing to hide this one specific song on a vinyl. It did come at the end of a side, making it easier to sneak away.

Still, it all ends up on the final song, a song that for the longest time I was absolutely convinced was some tragic, true story about Jimmy discovering his brother was a beautiful, amazing poet and wanting to honour him posthumously. It’s not a true story, but it’s a retelling of many true stories, all kind of cooked together. It’s one of my favourite Jimmy songs, and part of what I love about it is that it’s a very singable version of the kind of song it is. It’s sad and wistful, but that wist doesn’t mean the song breaks down as a song.

I love this album but I love it because it has He Went to Paris and Death of An Unpopular Poet. The janglier, louder, faster stuff I love from Jimmy isn’t on this, and I can honestly take or leave the majority of the remaining songs, but I have fun memories of sitting around with my cousin, uncle, and dad, and singing, together, The Peanut Butter Conspiracy, so it’s always going to hit a soft spot for me.

Good album? Great album? It’s not like any song on it is bad, it’s just that this album has ‘merely’ two amazing songs on it, and those two songs kind of replicate one another, as reflective and mournful stories about unfulfilled goals.

Here’s the Spotify playlist if you’d like to listen to this album.