Before we get started, this movie is basically a book report for my generation. Like, this is a movie that a lot of English teachers (not mine, mine weren’t cool) let the students watch so they could do a comparison between the texts and maybe just once, just once get the students to give a damn about Shakespeare. That means that to me, I feel like 10 Things I Hate About You is probably almost boringly well-known. 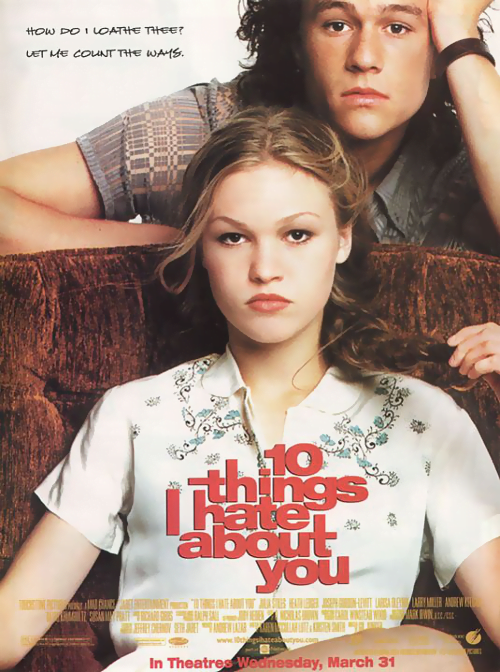 I’m not about to tell you anything about this movie you don’t already know, except that I like it and also the soundtrack is really good. Still, let’s hit the basic beats:

Okay, I think that’s everything Lindsay Ellis covered when she talked about it, and that’s the critical background I have to work with, after all. We good? Okay, let’s go. 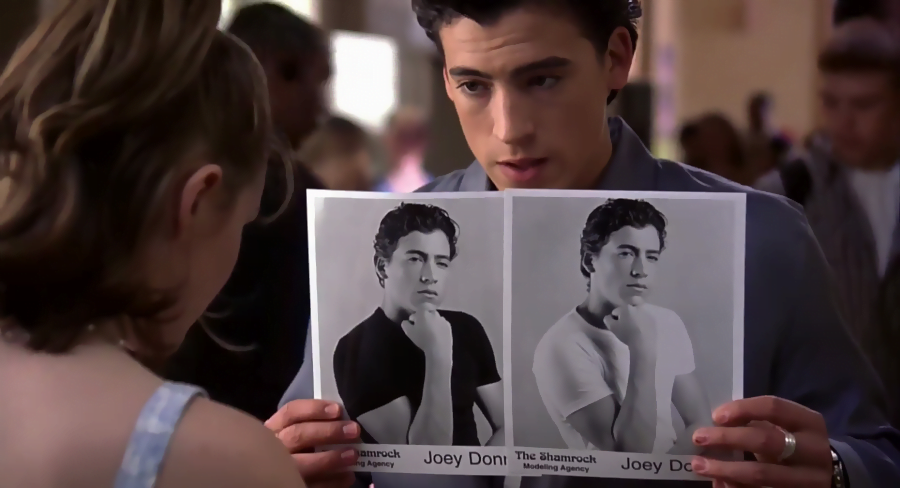 10 Things I Hate About You is a rare movie that I both own and like, and is very explicitly the teen version of a romantic comedy. It’s funny and engaging and low-stakes, because it’s about high school romances, which if you’re not aware could not matter less. It’s also a real fantasy version of high school – a version that simply doesn’t exist, like, not even a tiny bit, and I know it doesn’t exist not just because of how it compares to my high school experience.

This whole genre of movies wasn’t about things that happened, they were about things we could fantasise about happening. There’s a really weird bigness to it, too! When you get down to it, high school for most students is about three years of your life, and the relationships there are ephemeral, but without any greater context – because you don’t have one yet – it’s so very important, and that, I think, is why I liked this movie. I liked it because even though the actual stories presented were just ridiculous (like, who actually can keep secret schemes secret at that point in their lives, really), there was still a way that the things can work out in the end.

Part of what makes things work out in the end is being honest, by the way. And punching an asshole in the face.

I wish the problems I’d had in high school worked out like that. 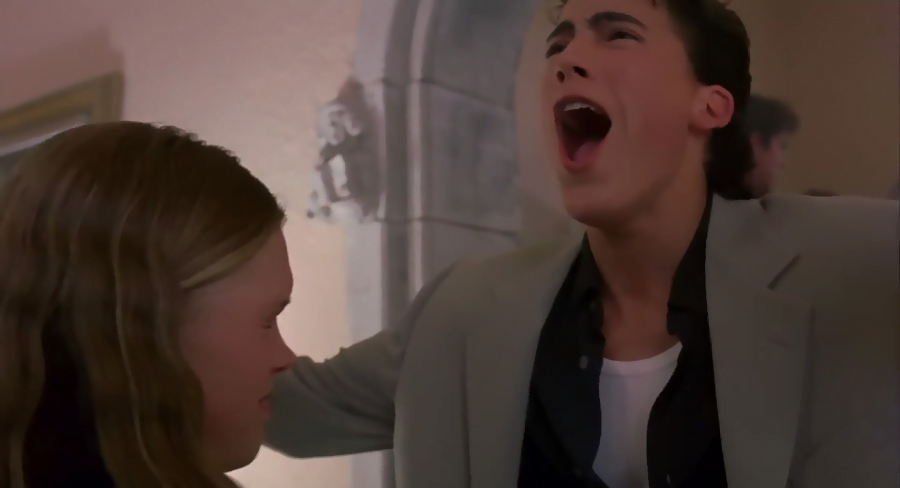 It’s all so unreal, which kind of heightens it for me? 10 Things I Hate About You is a movie that isn’t just about the high school I never attended, it’s about the high school nobody ever attended. Everyone has a car, the place is enormous, there’s a sports field with working sound equipment that can just be left unattended, there’s – it’s a nonsensically big school, and the bigness of it relates to the bigness of the themes and the story itself and what matters.

And in that unreality, you get Heath Ledger and Julia Stiles, as a displaced, troubled boy and a legitimately resentful woman, who in the moments when they actually interact, are really into each other. The gears of how their minds and lives work connect, and they treat each other with a respect and an interest that’s really nice. It’s just nice! It’s a vicarious, enjoyable smooch framework and I like it. And then when you’re hooked into that feeling, you realise the framing of how we got here is all messed up, and suddenly you’re invested with wanting the rest of the story to work out to fix that.

And the story fixes it in a way that I like, because it doesn’t lie about it, or hide it. It admits the problem, confronts the fault, and then shows you, at the end, that the story gets back to that moment again… and maybe it’ll last. 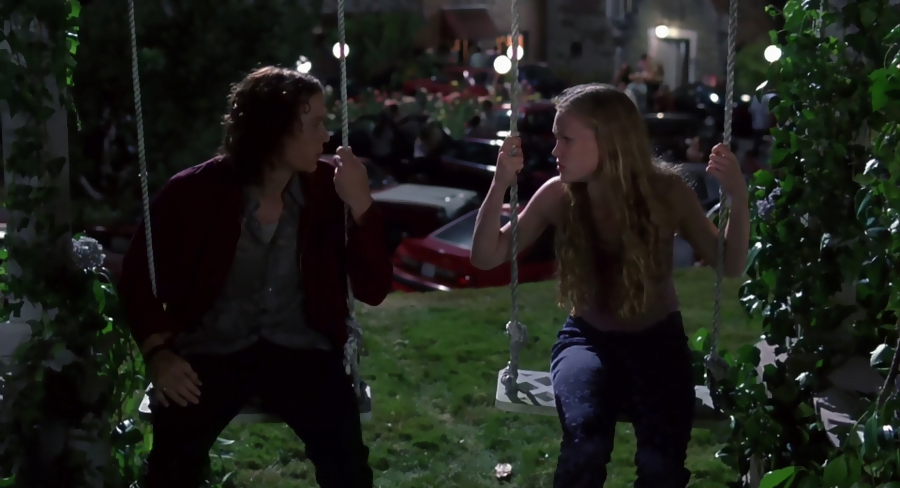 I still really like this movie but it’s hard to talk about it because it feels so naive and so silly to enjoy it. It feels like I’m venting about ‘a problematic fave’ which I’m really not – this isn’t a movie that’s so good I’d defend it from complaints, and I already have problems with the idea of a problematic fave in the first place.

Sometimes I wonder about this movie, and I wonder about it whenever I watch something else with Julia Stiles in it, or Heath Ledger. I watched a whole season of Dexter just to watch Julia Stiles doing anything, and that series is garbage. Hell, we used to think The Dark Knight deserved an oscar, and have you seen that movie recently? Good grief! 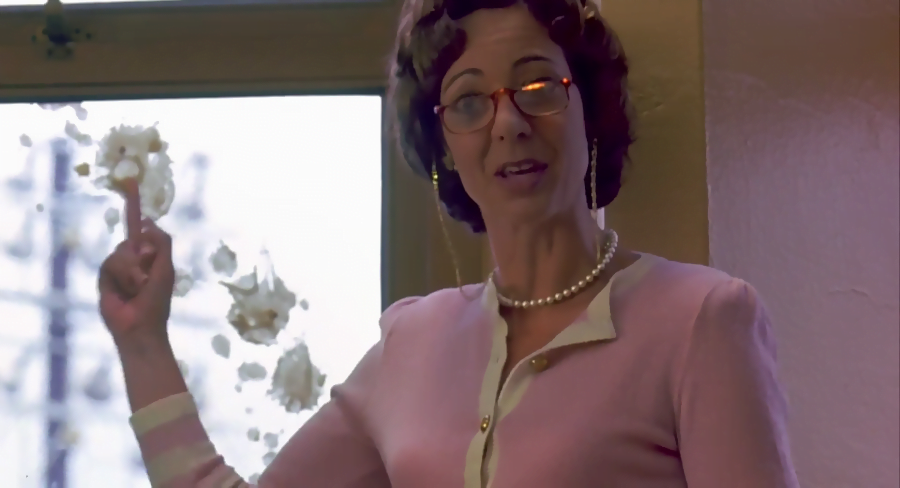 But maybe you just want a slice of 90s cheese, where you see hot people who are cool hang out and have a smooch, and the music is really good. If you do, give this one a shot. It’s straight and it’s white, and that definitely sucks.

But it’s still pretty damn good at being what it is.