Competitive Pokemon is a wild place. Typically, competitive environments that aren’t made with an oversight body – like Smash and Pokemon – wind up developing clouds of house rules. In competitive Pokemon, a common and popular format is to comply with the Smogon University rules and guides.

Smogon has a few top-down rules that tend to apply to all layers of the game – some rules designed to keep the games finished in a timely fashion, some rules designed to ensure there’s a diversity of teams. One idea that they have is the notion of a tier system, where – broadly – Pokemon are divided up into groups that represent how commonly they are played when they’re available. What this means is that there’s one small group of the most powerful pokemon that muscle out all sorts of other options, then a larger group under that of the pokemon that are good when that small group are removed, and so on and so on. The tier system mostly cares about usage, but not entirely.

When Pokemon prove to be so powerful in one tier that they distort the game, but they don’t have a natural space in the tier above them, what results is a ban. This sometimes gets referred to ‘being kicked upstairs,’ because the pokemon is almost always still valid in higher tiers.

There’s a lot of competing effects that make a Pokemon good, and the game is such a complicated set of different, competing systems that it can sometimes seem a little hard to work it out. Particularly, if you look at the ban list of the lower tiers, you see some weird things that show up. First, you’ll see some Pokemon down in low tiers that are treated as very important by the game – Guzzlord, for example, has a lot of high stats and it’s in a special category called a Ultra Beast. Guzzlord’s slow speed and lack of type defense, though, means that in the lowest tiers of play, it’s still not good, and taking it to higher tiers will probably not be successful either.

It is in this space, astonishingly, that Slurpuff lives.

Slurpuff is not an impressive Pokemon. It is a little blob of a thing. It’s 51.9% round, if that statistic matters to you. It is at best a little dessert of a Pokemon, something in the same family as Vanniluxe, a pokemon primarily known for being complained about, because it looks like ice cream.

And in one of the lowest tiers of Smogon competitive, NeverUsed, Slurpuff is banned, for being too powerful.

It’s a combination of factors, but the main interaction is between Belly Drum, a Sitrus Berry, and Unburden. This is a move, a passive ability, and a held item. In sequence:

This means on your first turn with a Slurpuff, you take whatever hit your opponent can deal out (because Slurpuff is pretty slow), Belly Drum, then the berry kicks in and heals you for about a quarter of your life. Often this belly drum will be fired off without losing any health first, because opponents will often have to trade their lead to something that can deal with Slurpuff. Then, with your berry eaten, the Slurpuff’s speed is now twice as high, all for one game action. Now, your Slurpuff can just… smash the living hell out of almost everything down in NeverUsed, because it’s faster than them and can KO them in often a single hit.

That’s pretty much it; there’s more to it, other concerns that Slurpuff’s type and the tier makes it hard to deal with in other ways, but that’s your basic combo.

And it’s kinda neat that Slurpuff of all things is super dangerous and needs to be dealt with. 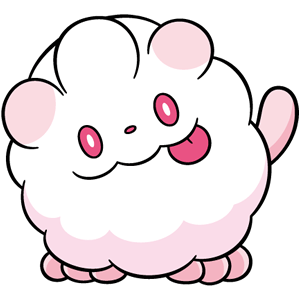 Here’s the better thing though. In the specialist format Little Cup, where all Pokemon are level 5 and only unevolved Pokemon are allowed, Slurpuff’s prevolved form, Swirlix, which is even sillier looking, and even more of an inoffensive little sweetbun, is also banned.

Because it can do all the same things.