The classic villain of the Transformers canon is the generically named villain Megatron. In almost forty years of reimagining and endless marketing, we have seen Megatron in a lot of different ways. He’s been an unassailable, all-powerful figure at the top of a hierarchy, a strongman ruler who can oversee an army, a gatekeeper of power, a rebel leader attacking an empire, a damaged soldier, a gladiator and an avatar of oblivion. Across the major histories of Transformers, Megatron’s image of himself has varied, from series to series, writer to writer (and in particular projects, episode to episode), but it is reassuring to see how consistently this character is recognisably himself.

Of course, to know that, you’d have to watch a lot of transformers media, and that’s not how lots of people partake of them. Most people, at least, most of the people who don’t watch the Bay movies and think ‘oh yeah that’s about right,’ bring the same thing to mind when they talk about Megatron.

They think about a gun. 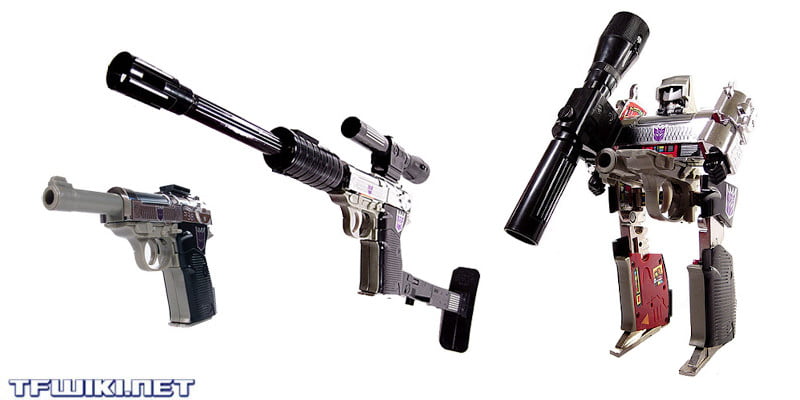 There’s a lot of lore around the gun form of Megatron, sometimes called ‘Uncle Robo’ by the kinds of turbo nerds who like to say ‘did you knowwwwww.’ I’m not invested in making an exhaustive history of this toy, but the toy does bear a special place in the narrative of transformers for a bunch of reasons. First, there’s the way the gun was originally a tie-in with the 60s TV show ‘The Man From Uncle,‘ which is why it has the fantastic name of ‘Uncle Robo’ from its Japanese version. Second, there’s the true-at-heart story that the toy posed risk for kids, because it looks like a gun, and the fear was police would shoot them, in the country where everyone has guns, in the 1980s. It’s not that the gun was specifically involved in a specific crime, but the fact it looked like a gun meant it got caught in a bunch of legislation designed to make sure fake guns look like fake guns, with the little orange cap over the end of the barrel. This measure, designed to ensure kids got shot less, didn’t work, at least for black kids, but nonetheless was roundly complained about by the community for generations, because anything that treated our toys for children as if they were things children would likely have or use was an imposition on our rights as serious toy collectors. And that’s kind of the ‘default’ point for Megatron. He’s a dude, gunmetal grey, who turns into a gun, and that gun is … like, a gun. It’s a gun you hold. No matter how silly that is, or how silly that idea is in the universe it’s from. Like, as a gun, he’s usually depicted as having to be wielded by another member of his army, usually either Starscream or Soundwave. Yet, we’ve had other Megatrons, of varying impact! 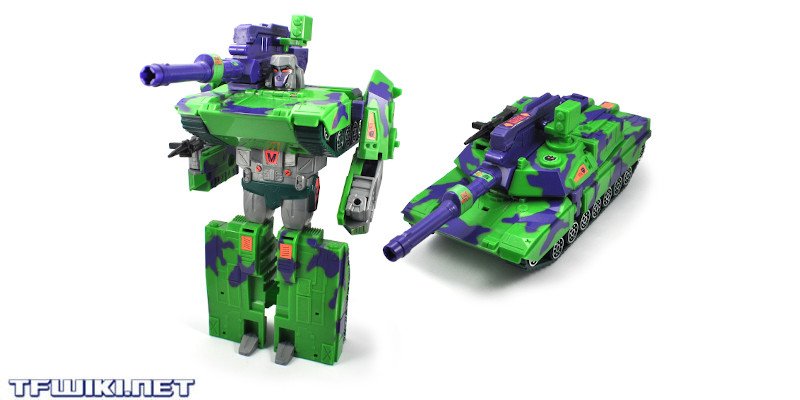 First after the gun, we got this ‘tank’ in the nebulously named ‘Generation 2’ Transformers. Obviously, we hated this and it was terrible, because it was different, and the internal language of transformers fandom was already set on the ‘they changed it so now it sucks.’ Boy howdy was that muscle going to get a workout next generation.

This violently coloured tank was the ‘next Megatron,’ and because it followed classic Megatron, it served as an example of the first wrong Megatron. We also don’t get a lot of insight into this version of Megatron as a character, but it doesn’t much matter – it’s Megatron, but now he’s a tank. Whatever.

By the way, check out those tiny little tappy toes. 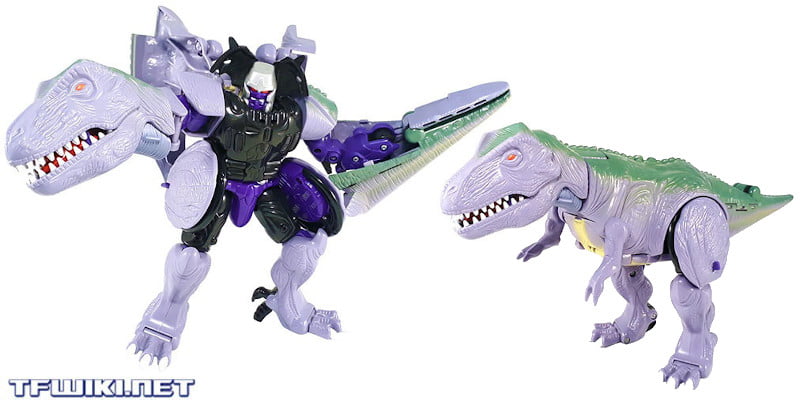 The next major incarnation of Megatron, and the thing that broke my personal ‘they changed it so it sucks,’ boundary – ten years later when I thought back on it – was Beast Wars megatron. He’s a T-rex. He’s a freaking T-rex!

This Megatron was also the first serious break in characterisation than before. Original Megatron oversaw a military, and was kind of an idiot – I mean, he kept Starscream around, and his plans were often silly even to me as a child. But this Megatron was thoughtful, gloating, preening and superior. He made fun of his subordinates, but also endured their strangeness, like how Inferno called him a queen, and he couldn’t get him to stop.

And like, a purist vision of Transformers wouldn’t let us have this Megatron. This Megatron is only available as someone who explicitly rejected the line of continuity, the slavish need to be a gun. And what’s more, he was tailored to his environment – the Beast Wars story is about animals in prehistoric earth. No place for a gun there, nowhere that would make sense. 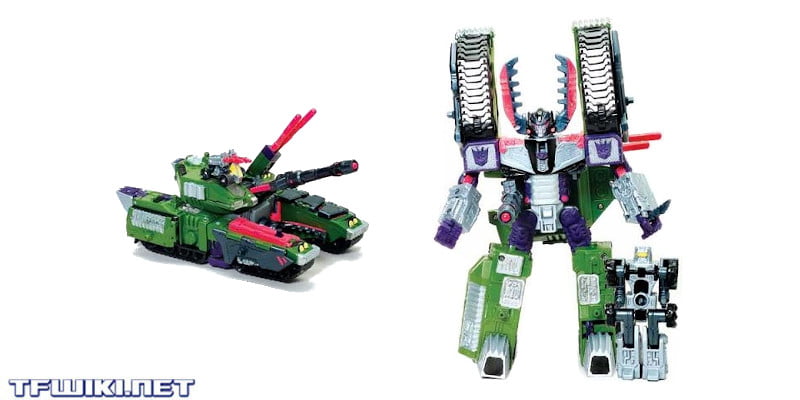 Armada had this Megatron, who… like I don’t like the way he looks like a stag beetle, but the core idea of him as a tank is now being more thoroughly realised. The actual thing he turns into is a bit of, um, what I think we might just say is ‘crumpled up dude on his face,’ with a big kibbly backpack, but the technology is still evolving.

Narratively, this Megatron is honestly pretty cool. When he encountered Unicron, his response was not fear or supplication, but to instead draw plans on how he could tear Unicron apart and use his power for himself. Impressive stuff.

Also, this was the story arc with antihero bishounen Starscream and the strange little plot spurling of Hot Shot, the reinvention of Hot Rod and Bumblebee that just got turned into Bumblebee later on. 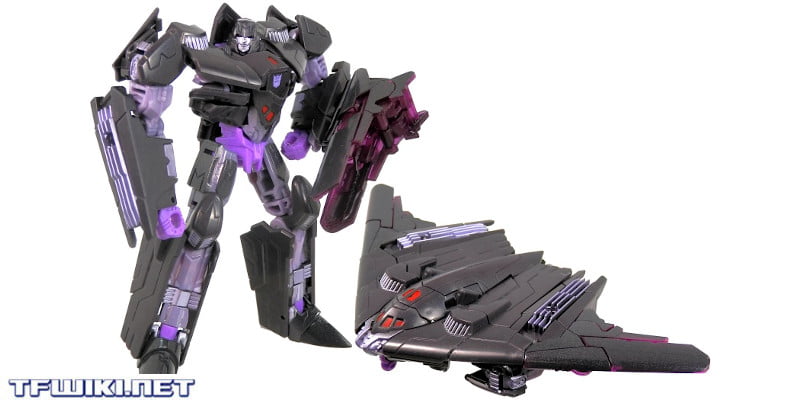 Honourable mention though goes to this design, which is apparently just a toy made of G1 Megatron. I don’t personally see it – like, I think of it as more Skywarp aesthetic than Megatron – but I do like the Stealth Bomber. It could be really cool if he was grey and black and maybe the highlights in red?

Anyway, this is just a Megatron I thought looked cool, and what I especially like about him is the way that the form itself isn’t a combative form, but it is a war form. The stealth bomber lives above the battlefield, it doesn’t dogfight, but it does represent being able to easily leave the battlefield, and rain down indiscriminately on battlefields. I really like it, especially with some of that cynical gulf war machismo, where his ‘precision’ tools are just immense cluster bombs of nonsense. 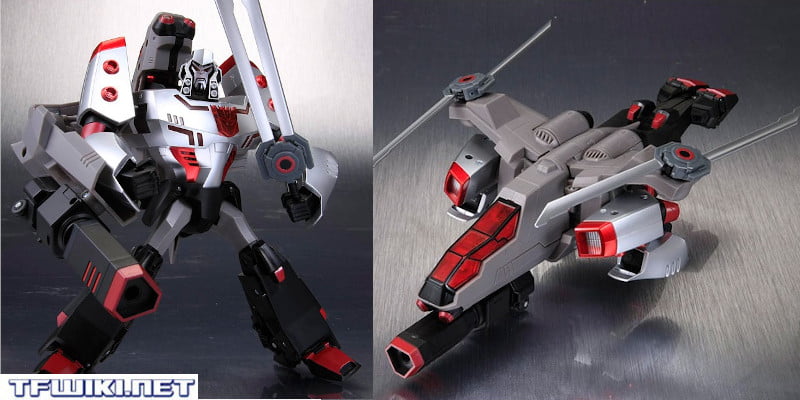 I do have a favourite Megatron – this helicopter from Transformers Animated. He’s a flier, which builds on the idea of Decepticons as ‘the air force.’ He’s also a thoughtful, interesting villain who’s used sparingly in the development of the Transformers Animated narrative. In his first appearance, he cleans house on the whole crew, but then circumstances and betrayal leave him injured and unable to leverage his full force on his enemies all at once. It’s a cool plot arc that uses Megatron’s threat properly – he’s individually a match for everyone, even groups of the heroes, until they spend months at a time learning how to fight Decepticons.

Okay, so why this little rundown of Megatrons?

Because Megatron is, traditionally, a gun. And by volume, he is definitely a gun. The majority of toys of Megatron are versions of the Generation 1 character, and of those, lots and lots of them are if not the gun, are meant to look like the gun, or find some excuse to involve the gun. And like…

I find I think the gun is dumb?

Like, okay, it was maybe a cool thing at the time. It was novel, sure. But it was weird and dumb and relies on ‘space shifting,’ which is one of those things that doesn’t really hurt the story space, but I don’t like when the story relies on like, jamming it right in your face. And this is the villain, and he keeps putting himself in the hand of his least responsible subordinate, who has betrayed him multiple times. What does being a gun get him?

The gun is primal?

But also the gun is really dumb?

It creates this sort of essential helplessness to Megatron, as a device we spend a lot of time asserting doesn’t have its own agency is the form that the leader of the Decepticons takes on. And maybe that could create an interesting dynamic where he has a host of trained subordinates to wield him well and that creates different tactical needs, but he doesn’t do that. He just jumps into Starscream’s hand.

Of all these forms, I think the stealth bomber is honestly one of the coolest as far as ways to tell you what Megatron should be like, or about. Remote, distant, dangerous, but also if he wants to fight, he has to break out of that, he has to turn into his robot form.

So there, there’s your conclusion. Megatron shouldn’t be a gun. Yep, think we’re done here. Whatever.