A few years ago when Fox was doing more artwork on comission she had a very charming, cute little business card. The card depicted a foxgirl on her belly reading a book and had some contact information. The card was useful, serviceable, and also printed wrong – the information it has is simply not true. This is something Fox didn’t discover until quite a while after she’d bought them, and so, she had two boxes of completely dud business cards. They sat on a counter and we moved with them twice, until finally I noticed them and did some scribbly notes on the back of them.

This turned out to be a really, amazingly useful little thing to have around. 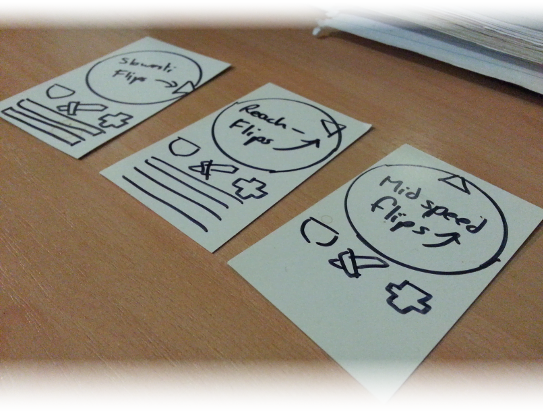 I’ve done game design on these cards for a number of games at this point. Roughly ten games, as far as I can think of, which got their start because I was goofing around with a permanent marker and the back of a business card that nobdoy wanted any more. Here we have something I mocked up for Tablecloth War. I wanted to try and make a war game like Warhammer that wasn’t about buying and painting minatures but was more about moving units around and benefitting from range/perception of range. The three basic movements and all the room for stats and special rules is right there, on the card, along with the space for artwork. I think I traced that circle off a milk bottle top.

Part of what makes these cards so perfect for me is that they’re ephemeral. I don’t have to save them or worry about them – they are junk, and I can repurporse that junk without feeling guilty. Any value I make out of them is value I wouldn’t ordinarily have. Sometimes I use these cards to make tiny drawings of people in buckets, or write out insults (the cuss cards have proven weirdly popular). Sometimes I use them to just write motivational messages and share them with friends. The cards are not vital or important – they are a disposable design space. If they don’t work or aren’t perfect, well, screw ’em. 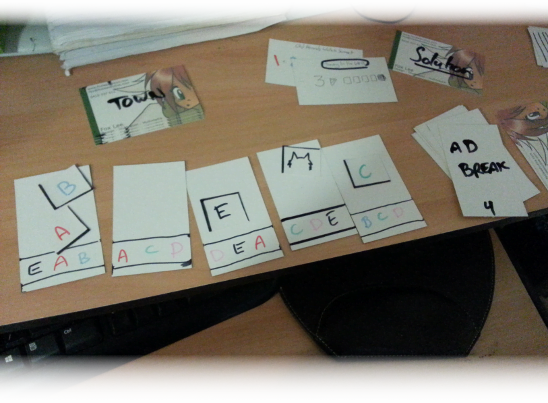 They’re also durable enough to be shuffled. You might be surprised how useful that is. Designing a card game is like designing a game with random elements, but where you can make that card game have some feeling of memory.

This here is the prototype for Stray. If you saw me, a little while ago, looking into combinatorics, this is part of why; I need to be able to generate random towns of 5 cards each, where even though they are randomly generated, can guarantee a number of features. This is a card game where you’re playing a smart dog in a strange town – and the business cards are fulfilling a host of possible options there. The town is business cards; there is a solution that the player has hidden. There are character cards, and tow ncards unused. There are little tokens – which are cut up versions of the cards. There’s even the Timer Deck, something I am weirdly fond of, too.

When you do this kind of design you’ll sometimes see ideas that you can repurporse elsewhere. I don’t know how many of these ideas will make it into Stray. Fiddling with them like this lets me see each component – and also see them interfacing with one another.

(the player of the dog isn’t allowed to talk to the other players and has to communicate with dog sounds, like barking) 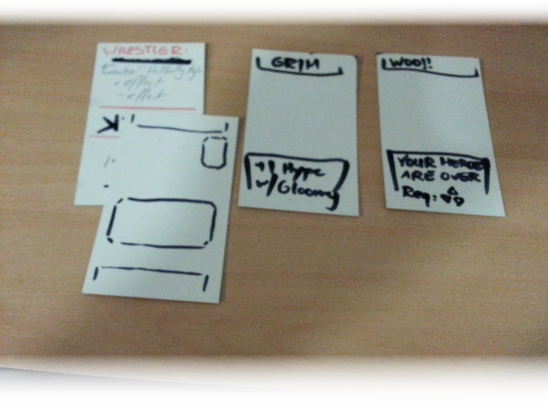 Some designs don’t work. Not on cards. This is where SMARX started, a game about managing a wrestler stable and organising and booking events, inspired in part by listening to The Greatest Podcast In The History Of Our Sport. When I realised this game was going to need a lot of space and ways for individual players to track their progress, I decided it probably wants small individual player boards, which interact with cards. That’s something this kind of prototyping can show you – what kind of game parts do I need? Do I need tokens? Do I need a place to track life totals? Can I do that without adding or removing components? 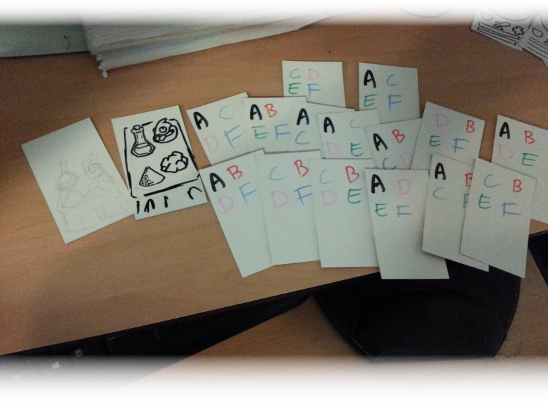 Here you can see the pile of math and garbage that will hopefully become Witch’s Draught. This is a game about being a witch in witch school, making potions and trying to make the best potion compared to all your friends.

Eventually you will hit the limits of what cardboard prototyping can give you. I personally feel that a handful of markers and some blank bits of cardboard is really useful for my creative process. If someone is throwing out business cards becuase they’ve promoted past them or stopped using them – maybe consider asking them for them.

They’re really quite handy to have around.