I’ve been watching a lot of Deep Space 9 lately, and central to that is the location of Quark’s, a bar and gambling den, written by people who clearly haven’t the faintest fucking clue how to play any kind of gambling game. There are two games shown in this place, Tongo and Dabo, which are Stupid Poker and Stupid Roulette respectively.

Now, while I would love to tear into Deep Space 9 for its terrible depiction of game on the stage, we have one Edo Baraf to thank for getting my attention back onto one of the worst games designed by one of the largest and most successful multimedia empires in history: 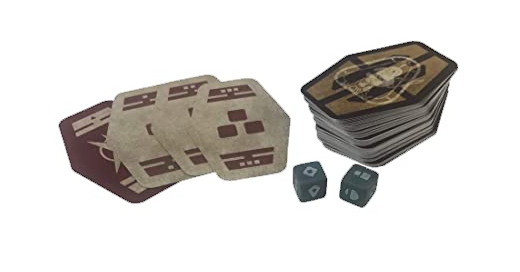 Sabacc is Space Poker. It’s meant to be like Space Poker. It shows up as a Space Poker in The Empire Strikes Back (well, it gets mentioned) and Solo (which shows it being played). The basic of Sabacc is that you’re trying to build a hand that’s got the closest score to 0, with some cards adding to your score, and some subtracting from it. The connected mechanic is that therefore, you want your hand to have a few cards as possible, and you can fish for better cards or worse cards.

Then, each round, you roll those dice, and if the dice come up a particular way, everyone discards their hands and starts over.

That’s so dumb. That’s so stunningly dumb and it’s dumb because it introduces variance to the game that nobody has any control over, and means that a significant number of hands of the game don’t do anything, regardless of what choices anyone made. It’s such a dreadful mechanic, and this is the rules in the special fancy version of the game you have to go to Disneyland to buy! What’s more, you never see Sabacc rolling the dice in Solo, but that may be because that movie doesn’t know how to do a good scene around a card game.

Okay, okay, look. I know I complain about games used in movies, except for Rounders, and mysteriously, Crazy Rich Asians (god that name makes me uncomfortable). If Sabacc (and Tongo, I guess) are meant to be poker, though, then why don’t they use the game to convey the kind of drama and tension you get out of poker? In Solo, you just watch Lando and Door swap hands back and forth until Lando has to cheat and wins, but you don’t see the hands or how the hands work. Floor is good at Sabacc, because he gets the best hands, and Lando cheats to get a better hand and… that’s… it.

The thing is there is a drama that can happen with poker that has nothing to do with having the best cards.

Okay look at this clip. This is Angel Shlomi playing versus Daniel Negranu.

Oh, interruption here, but uh, as a content warning, in general, professional poker players are kinda dicks, and Negranu is an Extremely Online man, meaning that if you watch too many clips like this you’ll find his vlog, and generally speaking, like I said, they’re kinda dicks. I am not endorsing any of these people as people.

Shlomi is the player with the 100%. He was never below 70% chance to win that hand, because his hand was so strong. But when Negranu read him – correctly working out what his hand was – he was suddenly in a position to work out what that meant. Since Negranu had been deliberately obscuring his intentions and working with a hand that was okay, to show that he knew that his opponent had a great hand, implied to Shlomi that Dan’s hand could beat that great hand.

Also it’s early in the tournament. Shlomi is relatively unknown. He is not experienced playing Dan and Dan is phenomenally good at working out what people are playing based on their intentions and their hands, even famously quiet, read-light characters like Shlomi here. Notice how Shlomi wasn’t talking or moving – and he was even wearing sunglasses, just this sort of dead still image of a figure waiting for the next action. All the action from him that Dan had to read was based on how he was playing the game, and from that, Dan correctly deduced he had two of the strongest hands in the game when you only had two cards (which bears out with the way Shlomi had been playing – the cards revealed didn’t really change much for how he played).

This is a great way to demonstrate character. If you showed Solo winning a hand like this, it’d show he was capable of perceiving very deeply into people’s characters. If you have him losing a hand like this, it’d show that he wasn’t used to the potential of being known and understood. And all of this is conveyed in being able to watch the game and the people playing it, and treating the game actions as meaningful instead of…