I released the Botch in 2016. I made this game in a week, with the help of a friend who had similarly manic energy creating the art, and what resulted was one of my most successful games.It’s not Dog Bear successful (though, same artist!), but it is a game I still think of fondly, can pitch easily, and sells well at conventions.

I don’t think that I’m perfect. Every person I’ve taught about making things, I tell every thing you make is making you better at making the next thing. And I have a lot of games – a big library of games. And some of them, with years of progress and learning, I’d like to revisit and improve. Since The Botch is one of my best, I’d like to start with that. I’m going to share with you some notes about improving and changing The Botch and ways it’s going to change in light of pressures that aren’t my fault. 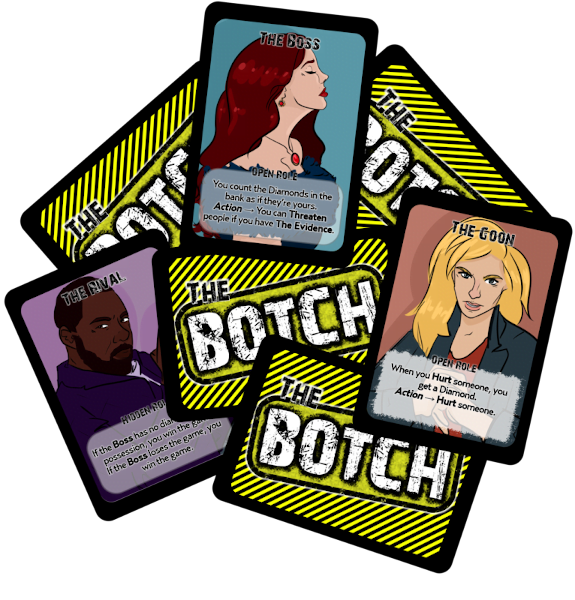 If you’re not already aware of The Botch it’s a card game that’s designed to tell a story of a heist that went really wrong. Every player gets two cards at the start of the game. One is an item, that lets you do things, and one is a role, that tells you who you are. There’s a pile of diamonds, and you want to gather up ten of them (or less in some cases), and the person who does can win the game.  In a four person game, you need a total of eight cards to play, and  because the item cards are face-down, there’s a lot of unknown information in a small space.

Now then, what are the things I like about the game?

Okay, so what am I going to do about this for a second edition?

But there’s another thing.

See, as it is, we’re getting changes in shipping and printing costs for all our games. And that means that for a lot of our $10 small games, shipping and distributing them is more expensive, and may not be worth it for us any more. But I want people to have access to these games as cheaply as possible.

And so the new plan is that, once I have the reworded version of the cards set up, to release print-and-play versions of The Botch and its expansions. What’s that entail?

First, something that may be invisible for Americans: There are two standard paper sizes for printing. I make everything in A4 or A5 – a piece of printer paper to me. But in the US, they use a common size called US Letter (this is what ‘PC LOAD LETTER’ means – your printer is set to look for LETTER sized paper and it wants you to load it into the PAPER CASETTE and now I’ve given you secret system administrator knowledge). For a print-and-play version of these cards that don’t squish or mangle them, then, I need to release print-and-play files in both sizes, for audiences that want to use one or the other.

Well, how translatable is that? A quick look indicates… pretty easy!

I’m not sure how the gutters on a letter page work, but I think you can tell it to ignore that when you print them. But okay, so this is optimistic. There are a lot of techniques for making print and play, so I’m thinking I’ll include a page of suggestions, along with the rules.

The end result is that The Botch goes from being a $10 microgame to a $20 box game, with a bunch more stuff in the box. It should be better and clearer. And also there should be a print-and-play version of this game on itch.

Which means I need to:

There, that’s a plan.