This year, as with last year, I got to teach a class at my Uni about making media, a class we define in part by being a class where part of your week to week homework is about making memes. It is a class about being Extremely Online, and I resolved, after last year’s completion, to make a plan out of managing my presence in this class this year.

This year, I wore a different shirt every day, and each shirt was a reference to the meme ‘Loss.’

Now, the class is only eleven tutorials, over thirteen weeks. I overdid it a little bit, so there are more than just eleven shirts, and let’s go over them.

Content Warning: If you haven’t worked it out yet, I am absolutely going to show you lots of variants on the meme Loss. Like you have to know that’s what this is. 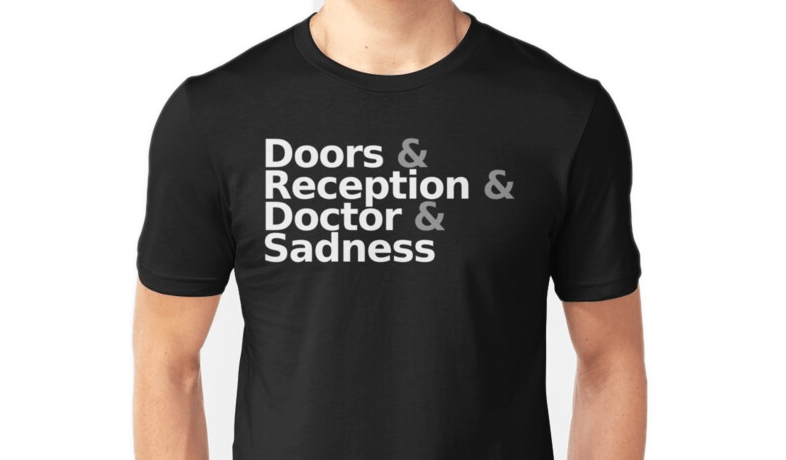 Here’s the first shirt. I like this one on pure black, and I consider this one of the best shirt designs. The biggest pro for it is that it fits an existing meme shirt template. The biggest con is I didn’t make this joke – it was originally a joke by Ettin.

I put Ettin’s words on my body. 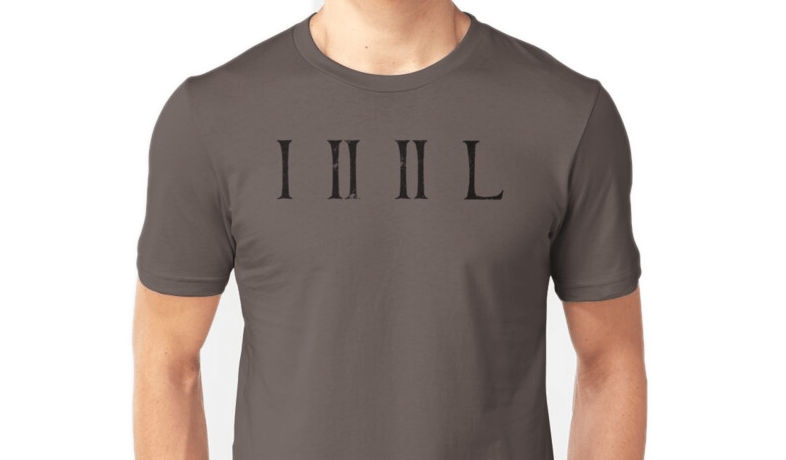 This one I like because it feels like a band logo. It’s obscure and kinda nice looking. I bought this one on this kind of grey-brown coloured shirt.

Problem with this is that I don’t own a lot of pants, and one pair of pants I wear is this colour. I have to wear this with my black pants. Not a big deal, but it does mean it’s more limited, and I am trying to avoid just wearing more grey and black together. 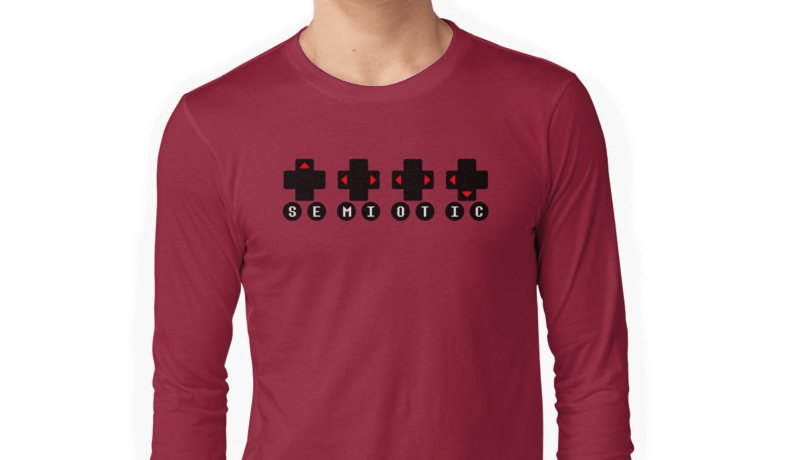 This is the shirt I’ve worn the most outside of class. It’s a fun little gamer-ass design, it has a specific term in it that encourages you to work it out, and it’s red! I’m trying to make an effort to wear more bright colours.

I’ve got it in a long sleeve shirt, which means as summer increases, I’m absolutely not going to wear this one more often. Even with the sleeves pushed up, it’s just too warm. 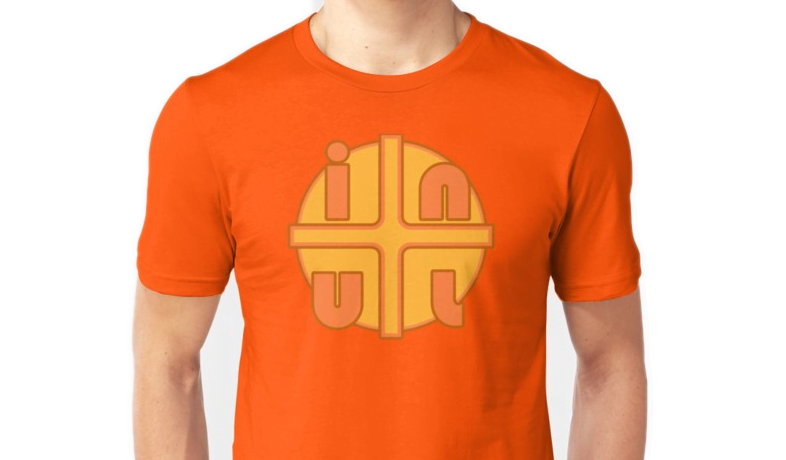 Speaking of wearing bright colours, I have an orange shirt now! This one’s design was based on looking at 70s wallpaper and a font called Bauhaus, which was modelled on, well, Bauhaus typography from the 1920s.

This one works out fine for most outfits I wear, it matches well with my dark long-sleeved undershirts for when the weather is cool. This one is definitely staying in the collection. 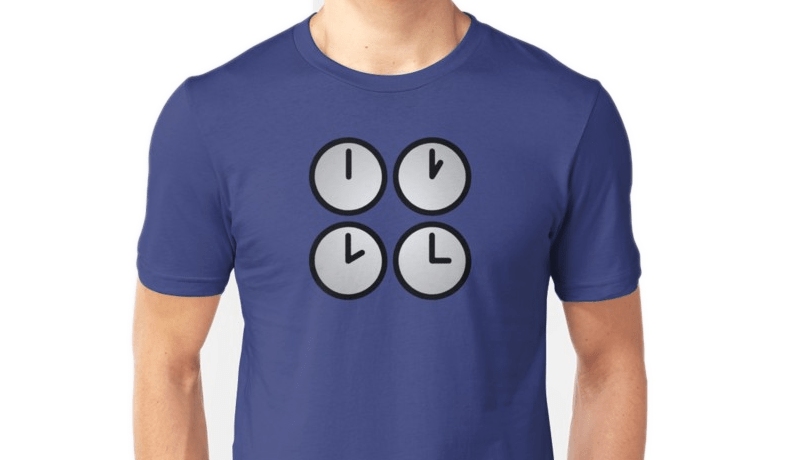 I originally made this Loss out of emoji on twitter. It struck me as interesting that these four sequential emoji present Loss without any kind of special changes or goofy interpretation. This is a really good Loss in my opinion, because it’s completely ambiguous why someone might put it on a shirt. It’s just abstract enough that someone might imagine that it’s just a generic shirt logo, but once you know the kind of thing I do, the kind of person I am, this one is perfect for one of those ‘is that… NO‘ moments. 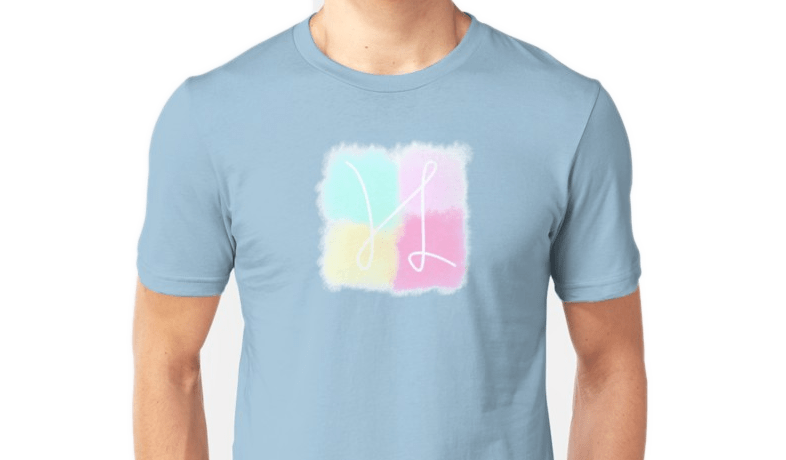 This swirly one based on bright colours is the first of my designs I’m unhappy with. Particularly, this pale blue looks really bad on me and I don’t like how it works with this particulr design’s floaty, white intangible border. It’s not like it’s inherently a bad look but I don’t like how it looks on me. 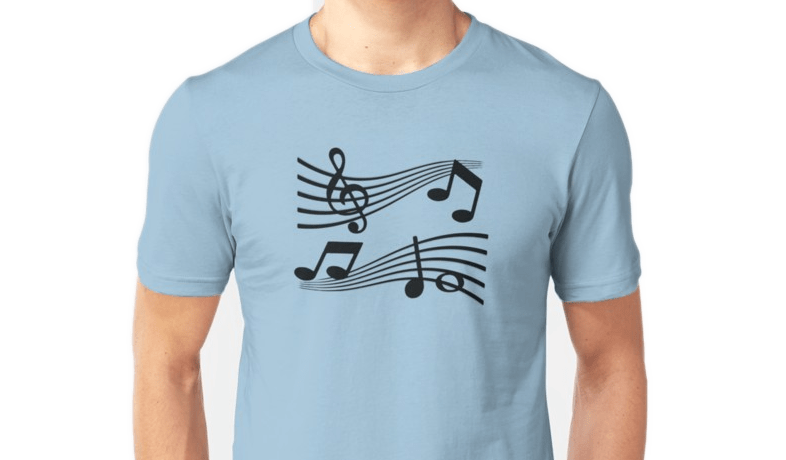 Similarly, this is a shirt I own in the same colour and it’s not good. I don’t think this one works well in a darker blue – I think I’d want the design to be white in that case – but this is another one that left me unhappy.

I think the problem isn’t the design, but the colour of the shirt. I have a few other pale blue shirts, and I just don’t like how they look on my body.
. 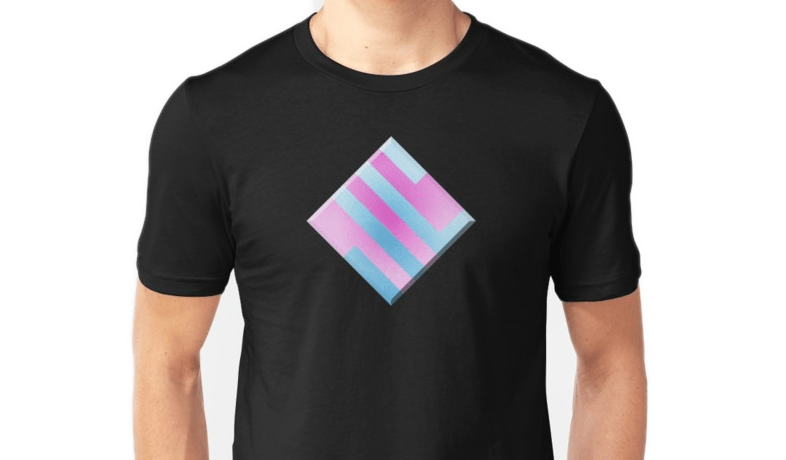 I really like this one! It has a sort of retro computer design, it uses the negative space of the design, it’s almost symmetrical so people might assume they know what they’re looking at, and that invites the eye to a second check. The design almost lokoks like the number 916, which isn’t any clear meme or symbol. It’s nice, it doesn’t emphasise the way my body looks in an unpleasant way and it’s subtle.

This one’s a real winner. It doesn’t look good on – again – pale blue, and I don’t like it on reds or yellows, but on a black or grey, it’s great. 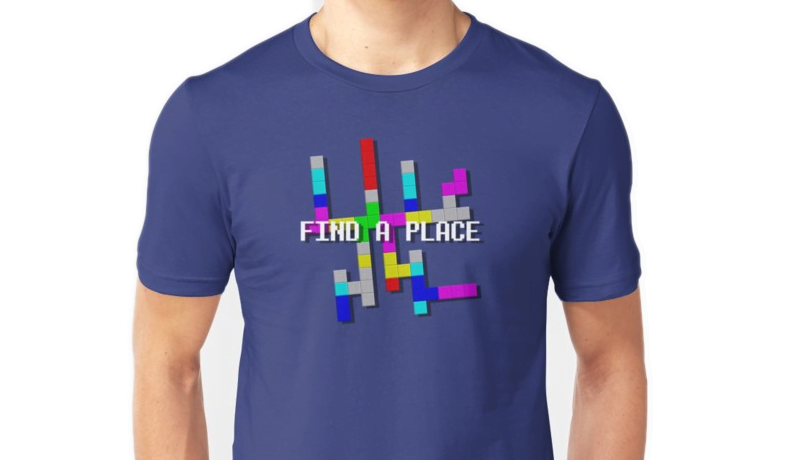 This design has the allure of being really detailed in a way that makes the Loss absolutely undeniable, and it has the message of being kind of like a motivational message. I like it but it is a bit big and very busy.

Also, the particular model of tetris with this colour palette is kind of from 1993, which means it’s a bit, uh, retreaux for now. Another thing is this look includes both the boundaries between the cells as well as the Loss itself, which I’m not wild about. 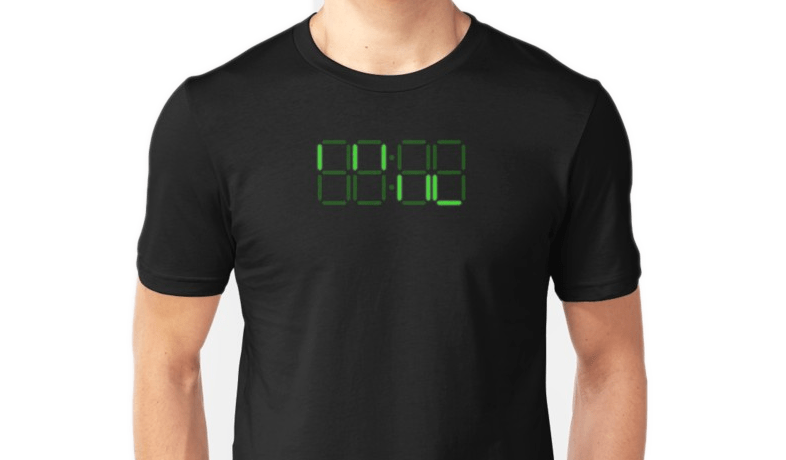 I like this design a lot! I just messed up setting it up, where I gave the green a luminous glow, which the Redbubble printing can’t do. This one is, sadly, again, a black shirt, which I’ve said I’m trying to stop wearing so many of. 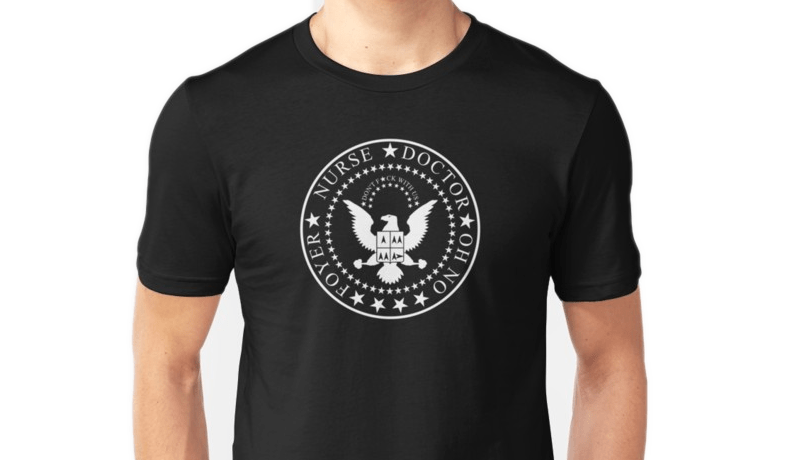 And we have my favourite design that was finally noticed by students. Not mine, but other students on the campus saw it and worked out what it was. Great stuff.

My only problem with this design is that it’s again, another black shirt. Also, I can’t host this design on Teepublic, because it’s too much like the Ramones’ shirt, and they’ve told me they don’t want to host it. Which is a bummer. 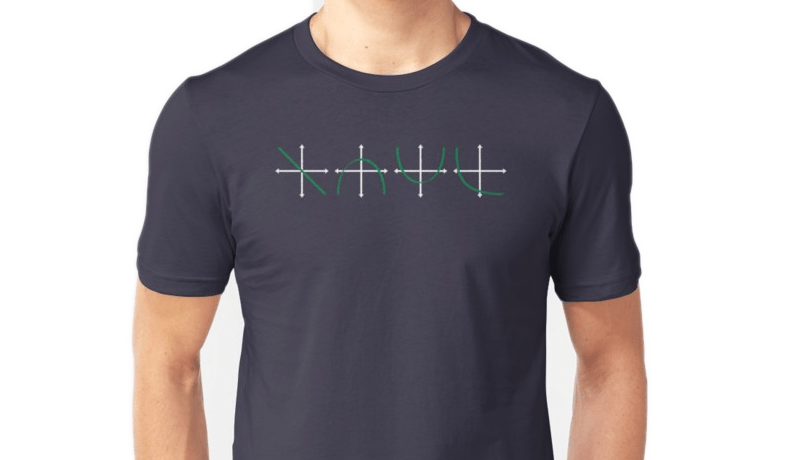 I didn’t wear this one at class, but it’s solid. The biggest problem with it is that it’s hard to see the design at a distance. 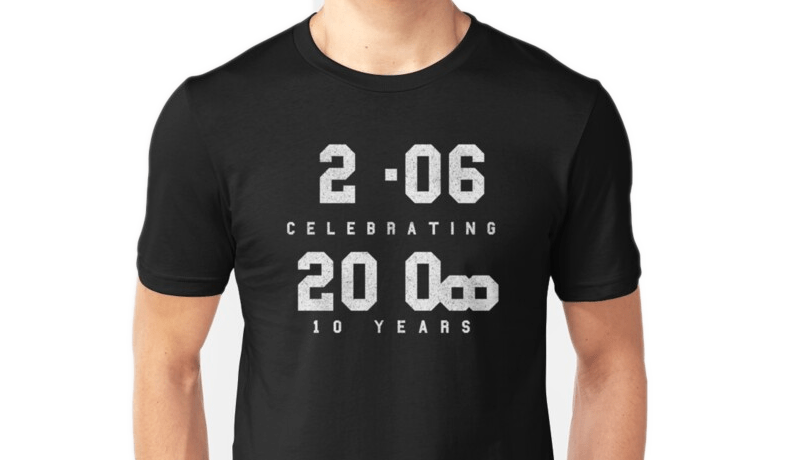 And finally we have this design which I put out June last year for the anniversary. This is a fine design; I don’t have it, but because it’s so simple it can only really go on very dark or very bright shirts. I don’t like pure white t-shirts from Redbubble any more, because they just naturally colour over time and it looks very nasty.

Anyway, if you like these shirts, you can check them out here!