Cards are frames and what you put on the card is framed by that card. Card faces are therefore, a frame within a frame, and what you can do with them changes based on how you present them. Confused? Let’s get to an example.

Here are a pair of cards I mocked up using a picture of Ivy, from Carmen Sandiego, a show that rules, and a character that rules. Seriously, I love this cartoon, it’s great. There’s some temporary text on it to show how much text can fit on this card, or places you can put stuff that fit within the gutters for printing purposes. 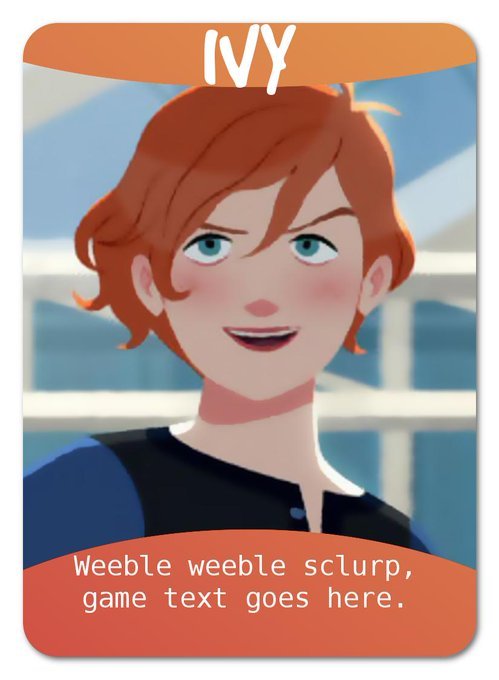 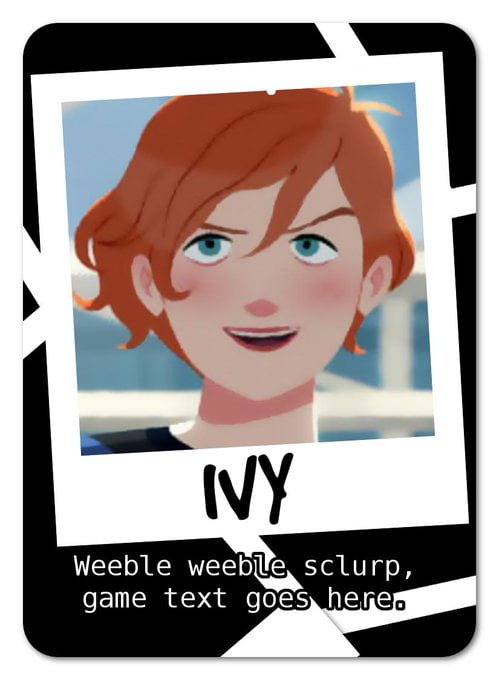 Card One makes Ivy and her surroundings into the ‘whole’ of the card. It puts mechanical information on a background (for ease of contrast in printing, and to highlight it and make it easier for the player to recognise it). Card two, rather, puts a larger frame around the same picture, one that covers the whole of the image and limits the underlying picture to a much smaller field.

Card two has the effect of making this picture of Ivy into a picture of Ivy – like, an actual object, a physical thing that’s laying amongst other objects on the card’s face. One of these is trying to make something about Ivy diegetic (the pictures), and the other something non-diegetic (the frame devices hovering around her like a news chyron).

These are both exercises in framing – for example, on Card One, Ivy is present. On Card Two, Ivy is past.

These can be used for different things. The former is probably best for a game where Ivy is assigned to do things, the latter, remote tasks or investigation. Card Two makes Ivy into a subject to be considered; Card One suggests she’s an agent, capable of doing things. If the character is present, they can make more personal, immediate decisions, take immediate actions; if they’re past, they can be considered more in terms of what they’re interested in or useful for.

Hypothetically, you could also do something to make a character impending – maybe a wireframe, or a fade on the image, or their shadow on a wall – make it look like a character is not here yet, to use their card to represent anticipation, or a future.