I’m not going to buy a Vampire book to find out what their dumb explanation is for this, okay?

Every now and again, someone playing a White Wolf RPG gets some attention on internet because of some bad decision of a player, usually, or a storyteller, just as usually, and the question is always ‘here’s some really supremely fucked up thing that I and my friends sat around doing in our pretendy-fun-time game, and someone thought it was fucked up, am I good?’

There’s a lot of different conversations that spin off this, like the shrapnel of a thrown firecracker, and some of those conversations are good, like ‘how do I communicate better with my group,’ or ‘how do we relate to the media that we create in play,’ but there are also a lot of really silly conversations, including ‘why do these people play that bad game, they should play my much better game,’ or ‘doesn’t this show how everyone who likes that game is a bad person.’

One big roadblock to the conversation that comes up, often, is the all-purpose tried-and-true, worked-on-the-Satanic-Panic why-doesn’t-it-work-now response is that in Vampire (and it’s so often Vampire, but hey, sometimes it’s Werewolf, but, these days, certainly lately, it’s Vampire), you are playing the monsters, and that’s that, they say, folding their arms and smugly sitting back. 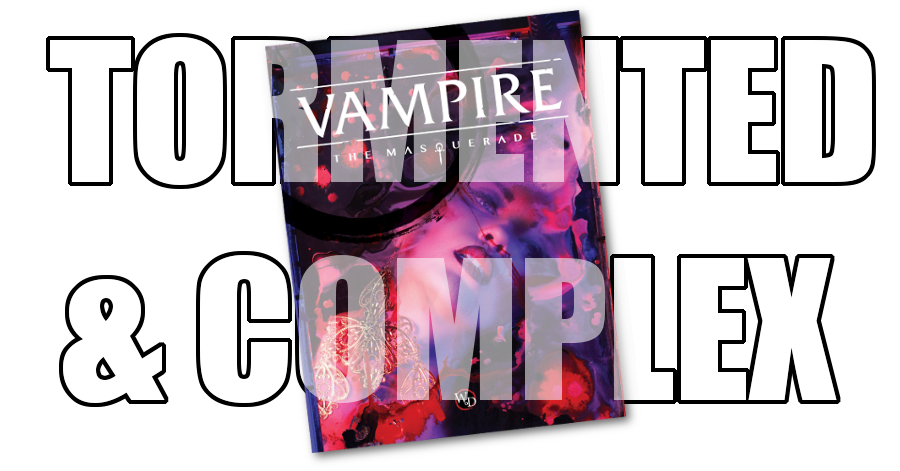 The correct response to that is ‘so?’

Playing a monster isn’t hard. It’s not even that interesting. What these games want to do, usually, in their best forms, is try to get you, the player into a mental space where you can appreciate the framework of a monstrous creature. Recently, though, that seems to be biased towards the idea that a vampire is a thing that by necessity must always be evil – that there is no way for a vampire to be a valid member of human society. This is a pretty novel idea, though, because it asks the question, why?

Now, one thing here is that the World of Darkness is a universe which has a sort of fundamental moral footing, so if the story wants to say ‘this thing is evil,’ then okay, it’s evil, just there you go, all Divinely Decreed. But these aren’t games that want to try and express that, they kinda balk at the idea of having their morality be as basic as Dungeons & Dragons (even though it pretty much is). Instead they start talking about moral justifications for power in their universe, or what makes Vampires ‘bad,’ and what ‘evil’ is in this universe.

Essentially, these arguments about what makes the Vampires monstrous is ‘they hurt people.’ Not just ‘the vampires that are like, Nazis, hurt people’ but just being a vampire hurts people. Your vampire can only exist as a parasite and that means they literally can never morally exist in the universe. This puts the Vampire world’s moral framework as kinda hilariously puritanical: There can be no moral application of violence, even in the opposition of the violent. Intention is not just corrupt, but your intentions can be corrupted by your nature. This extends throughout the universe – Vampire hunters are seen as corrupted by their pursuit of stopping Vampires. It’s a world where the Abyss doesn’t just look into you, but the only moral action that doesn’t lead to corruption is to lay down and just fucking die.

It is afraid of violence, in the most pearl-clutching way, and tries to enforce its fears with its rules about the world, then enforces those rules with lore about feeding a cosmic abyss.

You may be ‘playing the monsters’ but you’re playing monsters in a world so profoundly backassward that being a monster is meaningless.