Our dog is named Elli.

It’s not short for Elliot, or Ellias or Elijah.

We also use he/him pronouns for our dog, because the complexities of gender are unknown to creatures without language, and without any way for him to self-identify, we just use the usuals. He is, of course, a very good boy.

Elli is very important to our lives. He was part of the decisions we made about where to live; his needs are part of our daily routine; we feed him in the mornings and we feed him in the evening. Our house has structures in place that are designed to give him spaces to be, and things to interact with and ways to make his wants and needs known in our house. We have changed the ways we enter our house in part, because of how it relates to our dog.

Point is, a dog in your life is a force that changes the way you live.

Elli is a lovely dog, and Elli is a cute dog. He is long and elegant and skinny and awkward and he transforms readily between a tiny little snuggly bean and an enormous, splayed, haunted bike rack.

And one of the weirdest things to me is just how much people misgender him. 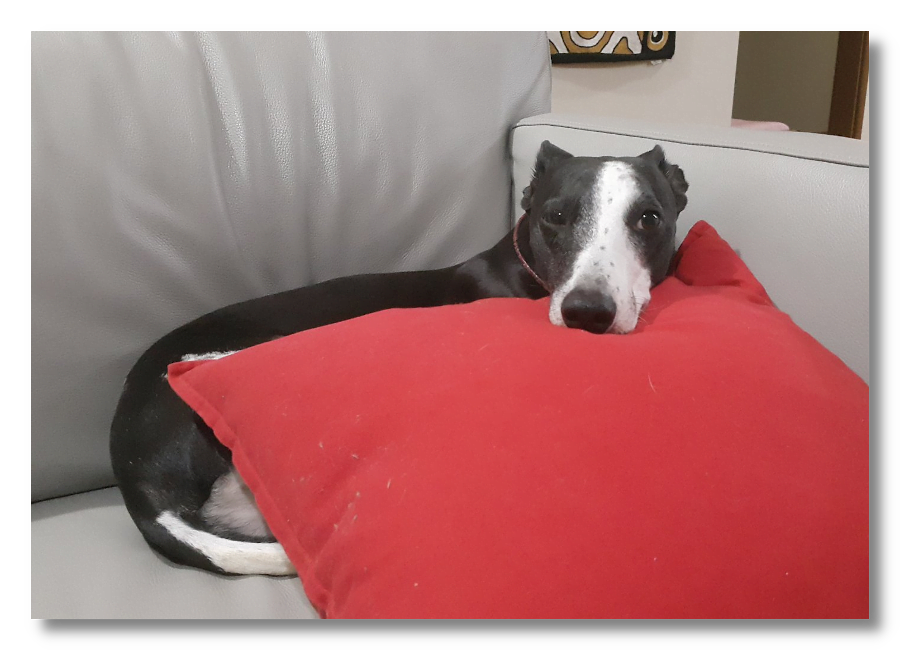 Like, there’s not a powerful gendering force around dogs or anything. Elli isn’t wearing clothes that code him femme. He’s not a feminine looking dog, in any particular way? I mean, he’s not pink or particularly frilly. He’s just a dog.

That implies to me that the thing that drives it, the thing that makes people think they should misgender him is entirely his name. His name which has one syllable different to a common masc-coded name, is enough that people will assert a femininity there, and that femininity is entirely based around that same syllable.

Genders are social. There is no reason anyone should gender this dog except how they observe him being spoken about socially. He does not care about getting his pronouns wrong, but we do, because those aren’t his pronouns. And it gets under my skin particularly because it’s just this core evidence that people don’t listen to the immediate when it comes to gender. The pressurs from outside, the general trend, are more important than the specific answer they’ve been given.

But what makes this even weirder, is that people apologise for misgendering Elli. They recognise that what they did is a mistake, that they did something wrong, but they won’t, usually, argue with me about it. There’s a clear embarrassment, which is even weirder because Elli doesn’t care. They didn’t hurt his feelings. They didn’t really hurt my feelings watching it, though I probably did feel that they were a little silly.

(Don’t get me wrong, someone did once assert ‘nah, it’s a girl’s name’ and kept misgendering him, and that was one of those reminders that I probably shouldn’t waste my time talking to them)

Anyway, Elli is in my life because of Fox. And it’s Fox’s birthday, so Happy Birthday, Fox.