I am not actively a big fan of the Simpsons. I mean, they’re part of my sense of humour, I know a lot of the memes, I get a bunch of references but that’s because The Simpsons is a kind of cultural background radiation. It’s not something I’ve actively watched on TV at any point in the past twenty-five years, which is kind of amazing to consider. Like, I haven’t watched an episode of the Simpsons since I was back in the cult, it was that long ago, and yet I’m reasonably conversant on the whole subject.

It doesn’t matter, though because apparently, the majority of the stuff The Simpsons fans reference all came about in that five year window, and I’m sure that there’s no other influence on this like the age of my friends. Based entirely on this I will simply assert that this is when The Simpsons stopped being good, and never bother thinking about anything after that point.

One episode in this ‘classic’ period, and the one which asks us to celebrate it tomorrow – I tell you early so you can get organised – on May the tenth, is the twentieth episode of the fourth season episode (blaze it), Whacking Day. 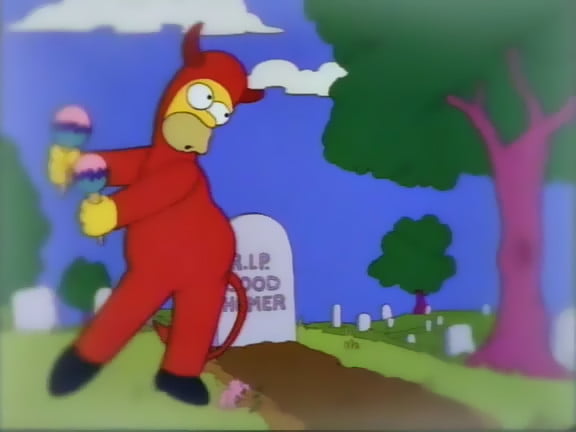 If you haven’t seen the episode, it’s one of those fun examples of how the Simpsons’ heightened cartoon reality (and lack of material needs for sets and props) let the show rocket through a whole variety of plot points. Like, consider this for a plot synopsis:

And by the way, I tried to just list just the events that play into the narrative, rather than the gags and jokes like Grandpa’s crossdressing and the Oliver Stone Itchy and Scratchy episode or even Mayor Quimby being a duplicitous chode. Also as far as memes go, this episode’s an absolute banger, with lines like fickle mush-heads, or I am evil Homer or What’s a battle?

Anyway, that’s not really remarkable, per se. I mean all you have to go with here is ‘hey look, the Simpsons episodes of this era are really densely plotted,’ and that’s not special. Why bring it up, and why bother celebrating Whacking Day at all? 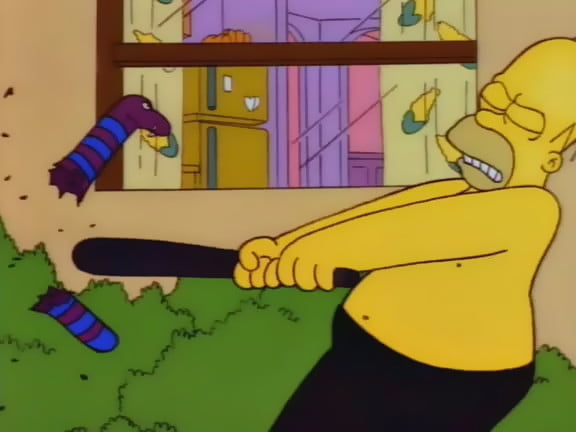 Yeah, the fake made up holiday in the show that’s also fake and made up, I bothered to ‘celebrate’ by acquiring jelly snakes and hiding them in my family’s house every Whacking Day, and whacking them with a stick. And bear in mind, this episode aired when I was ten, like, I wasn’t super young when this happened. There’s a limit to just how much ‘I was a kid’ can get me excuses for this.

Because I did it for years.

And what’s even stupider, is that I did this, celebrating Whacking Day the day before my birthday. That meant there was Anzac Day, Whacking Day, my Birthday, this busy little three-day period… and it’s not.

It’s May Tenth. Tomorrow! Half a month later! And the episode of the show – which I watched on tape repeatedly – says that. But I kept being convinced that it was the other date, and none of my family – who saw the same show as I did! And none of them corrected me! But not only is it weird that the adults didn’t notice that I got the date wrong (or they didn’t care), none of them cared to point out to me – a literal child – that the whole point of this episode was that Whacking Day was bad. Nope! Nobody cared to point out that I was missing that this whole event is about a bad idea that a kid, a kid my age, pointed out was a problem and got things changed!

In the United States, the first time this episode aired, it aired two days after my birthday.

Well, you may see. Is this coincidence?

Yes. It is just coincidence.