Part of this is because there just isn’t as much of it. Oh, sure, there’s more queer media than I could ever possibly experience even if I quit everything else and just absorbed queer media full-time 24-7 until the day I die, possibly of having tried to ingest a copy of Banana Fish or something. Still, if you take the set of ‘media,’ and then separate it out into ‘the things we mean when we say the word ‘media’ media’ then separate that group into ‘media I can readily access conveniently,’ and then that group further into ‘queer media,’ you’ve already made three mind-boggling steps down, and yet, it still feels, like somehow ‘queer media’ is a field small enough to be an expert in and that it’s kind of assumed you will be.

The millenial discourse of queer media – especially since we’ve got a bunch of millenials doing stuff right now – is one where you’re kind of assumed to be able to talk, fluently, about a number of specific pieces of media, and the discourse is shaped by those media, media whose access isn’t actually that universal.

I talked about this in April, how the videogame discourse being bent around a small number of indie hits that got the oxygen given to games of their type meant that sometimes, sorry, queer videogame media is busy talking about Undertale or Celeste and if you’re not doing something like that, or can’t relate what you’re doing back to it, sorry, the attention economy just isn’t paying out for you. The same thing is true of non-videogame media, though; the fact I’m never talking about recent movies means that I just don’t count as ‘a movie critic’ even though at this point I’ve been writing about movies pretty much non-stop for three years. 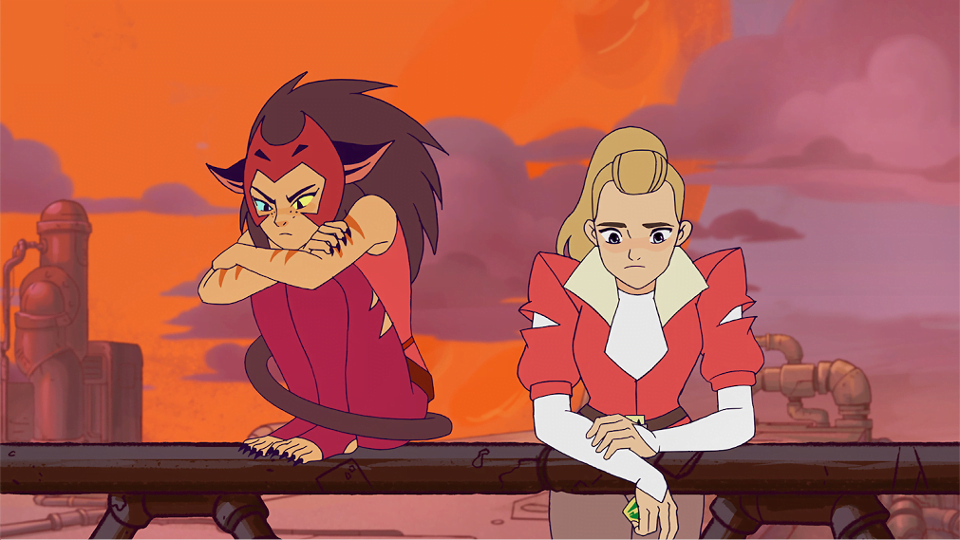 Now, now, don’t wig out, I said I wasn’t going to talk about She-Ra, and I’m not, not really. There’s nothing in this series you need to know to follow what I’m talking about. But She-Ra is a high profile kid’s series that got a lot of attention for its initial premise, and then for the shitty people it made mad, and that conversation is kinda where it ended.

I don’t want to write articles criticising it. I mean, I kind of do, because it makes me feel bad and I think it’d be nice and fun and cathartic to drag this show for the things about it I dislike. What I don’t want is the followup from people around me, upset by what I said; upset because they empathise with my pain (not likely), or upset that my criticism is invalid (also, not likely), or upset that I’m mean to the show (very likely). This isn’t even to say those feelings are invalid. Lots of people, especially growing queer people, anchor their identity to media, and when you do that, it can feel like a personal attack to see that work criticised. If you love a character and I think they suck, then if I, especially with a platform, say the character sucks, that can feel like I’m telling you your taste sucks.

Plus, there’s the extra effect of what I call the shithead brigade.

Any criticism I level at She-Ra runs the risk of being taken out of context and repeated by jerks who want to hate on the series. What’s more, I would be seen as ‘a queer member of the target audience’ (I’m not) to further bolster my ‘cred’ in that space, while on the other side, people hearing my argument would probably trot out the ‘not really queer’ side of the conversation or ‘who cares what a dude thinks’ stuff. It’s an ugly scene. I don’t want my words in these assholes mouths.

Sometimes when we talk about punishment and violence in media spaces – not violence in media, but violence exerted on media actors – we describe the idea of a chilling effect. The idea is that if a media creator gets attacked for creating media, then everyone else who creates similar media is going to be cautious about provoking that same reaction. This is stuff like the Comstock laws, where one or two authors being hounded to suicide made every other author really leery of doing the same thing. The Shithead brigade exerts a chilling effect.

I could make the case that ‘if you are mean to the cartoon boy, I will be sad at you’ is a similar form of chilling effect. Lords knows I’ve felt under more pressure from that in the past. Lately I just have tried to ignore it. It doesn’t really feel like the same thing, though, because I’m not under threat of violence. I just feels like being polite.

In the end, She-Ra is just another show. It really is. You may think it’s groundbreaking and new and revolutionary, but it’s still just another cartoon. And what it means to you is important. Knowing why you care about it, and why you like it, is a meaningful way you can know yourself, and know other people who also like it.

Just remember, you can also learn about people from what they don’t love, and negative opinions can still be just as worthy of legitimate consideration. Maybe sometimes when someone has a negative reaction to something, understanding why is a way you can understand them.

Telling them you don’t want to know why they’re upset, though?