Hey, this is going to talk about a shitty racist for a bit and feature some racist cartoons. Just so you know.

I am an easily annoyed man, full of rage and bile at things that ultimately, sensible human beings ignore in their day-to-day lives. An example would be the work of one Michael Ramirez, a conservative political cartoonist. Now, I’m not of the same general bent as Mr Ramirez, but that’s fine, lots of political cartoonists hold views I disagree with, because almost universally, they’re shitty old dudes who admire shittier, older dudes, in a medium that is mostly only used by incredibly shitty old dudes.

You can probably find almost any piece of this two-time pullitzer prize winner’s work and, if you politically disagree with him, regard them as bad. If you’re an actual political or cartoon fan, you’ll probably find the same problem, too – the guy’s style is decent at depicting objects, but he’s fairly awful at reflecting a variety of humans and their expressions – or maybe he’s just bad at depicting Barack Obama.

Hey, cartoonists, free tip: Barack Obama’s head looks more like an inverted drop of water than it does a narrow rectangle with enormous ears. If this is hard for you to understand, find some person whose job involves interpreting objects visually into illustration, and ask them to show you.

Thankfully, there’s only one to three black people in the world Ramirez ever has to depict so he can get away with just taking a skinny box-headed dude with monkey ears and paint it brown. Then when he needs to depict Al Sharpton, he can instead use the outline of a lynching tree? 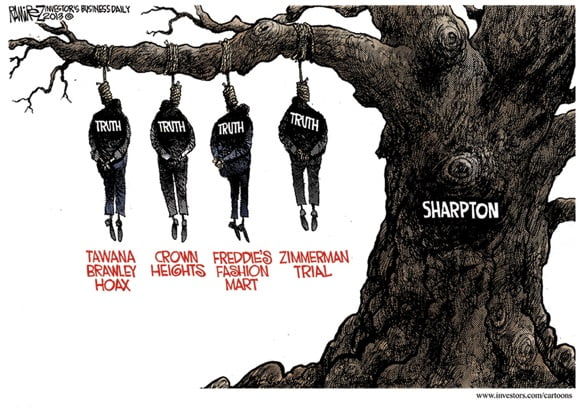 It’s possible the dude’s awful at depicting people and wants to use metaphor to hide that, or maybe he might just be a massive racist, though it’s hard t- 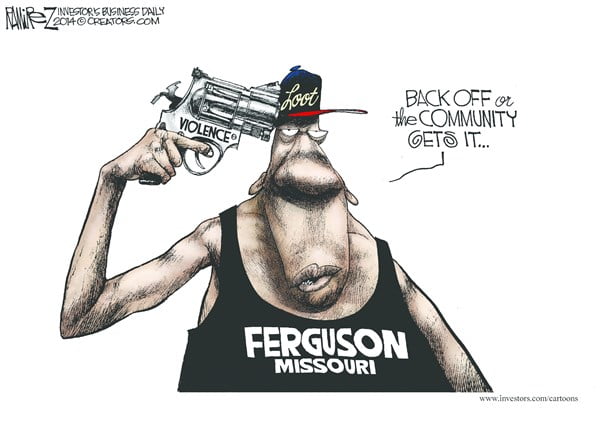 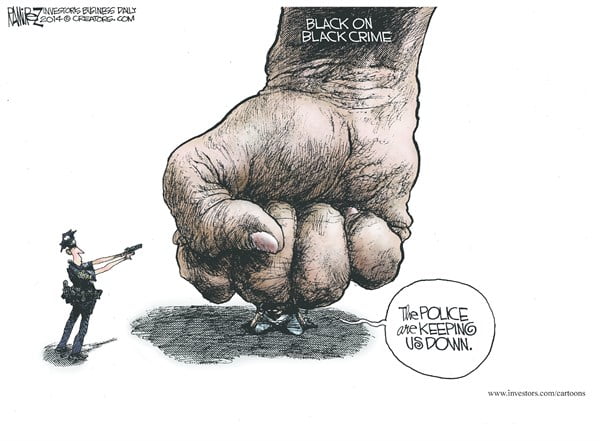 Yeah, okay, I’m happy to assume Ramirez’s a massive fucking racist. Probably of the ‘but I have a black coworker’ variety.

Anyway, the thing is, this isn’t actually about Ramirez’s politics, which is just another thing in a great big stewing sea of awful that includes people much closer to me than a cartoonist who can’t seem to depict black people as anything but racist caricature. I’m mad about that already, Ramirez isn’t a blip on that radar. This anger flows about Ramirez’s craft. Look at this more recent outing: 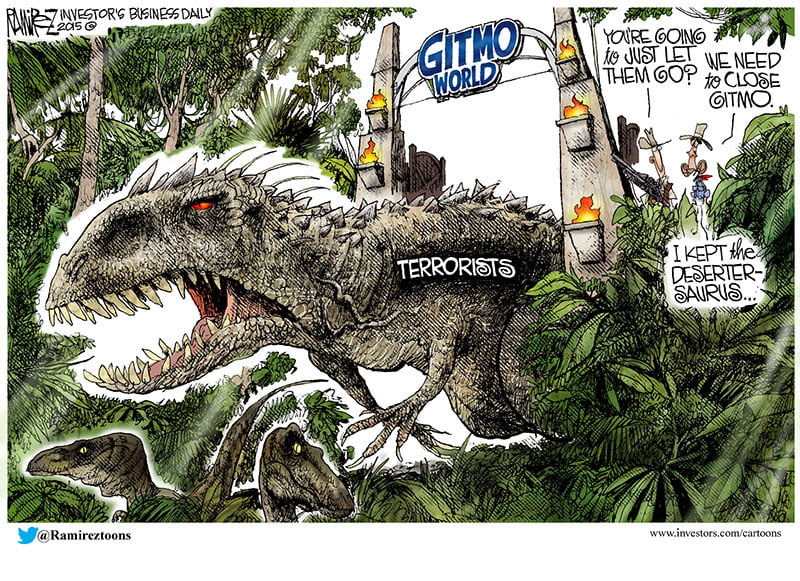 Now then, what the fuck.

This is honestly indicative of a lot of problems political cartoons have going on. The core of this piece is to use a metaphor that draws a parallel between two recent events; Barack Obama’s push to close Gitmo, and the release of the movie Jurassic World. There’s an incoherence there, where Ramirez invokes a movie where one of the core fears is that the park was used to create a new and more dangerous variety of a thing that the park had already created that was dangerous. That isn’t really the kind of comparison you want to make, if you really think about it – because yes, Gitmo has radicalised people against America, and it has done that in part by turning people who weren’t anti-American radicals into them by locking them up and torturing them for years.

That’s a bad metaphor. Or rather, it’d be a good metaphor for things that actually happen, if you were of the opposite politics to Ramirez. Ramirez shows through the body of his work that no, he’s not secretly a progressive, he’s just incompetent. Then you look over at the text in the right corner.

I don’t know if this is true for you. This might just be my eyes. But that little smear of text up in the top right? It reads, to me, like “You’re going to just let we need them go to close Gitmo.” In this bad cartoon, making a really silly point, with all that detail in the foliage, this artist, this cartoon artist who’s been at this for twenty-plus years, didn’t sit back, look at that, and say ‘hang on-‘.

This is an incompetent piece of work, and yet, Ramirez has two pullitzers and gets paid for his work. That’s what bothers the hell out of me about this. Because it feels like it doesn’t matter how good you are at your job, as long as you have the right people who want to hear what you’re doing. Today I’ve been in mind of what being bad is like; how Ramirez is relatively safe despite his absolutely disgusting attitude towards race, how he has a nationwide platform, and acclaim, despite all the things he’s had to say, his comparisons of foreign people to cockroaches and his technical incompetence. Because calling out racism isn’t as economically valuable as catering to the people out there who really want to blame unarmed black kids for being shot to death by racist white policemen.

This is the level of discourse white dudes are allowed. You can be bad, bad at your work, and express racism openly. Here’s hoping he doesn’t do something controversial that’ll actually get him in trouble, like criticise racist white people.