Hey, if you’re a Wizards of the Coast employee, you’re not in a position to read this article. There’s a custom card or two in here, and I know you’re not allowed to look a those. Don’t worry, I don’t expect it’s anything you haven’t come up with on your own.

Future Sight is a really awful thing for the normally completionist-driven community of custom magic card designers. The gimmick of this set was that Wizards printed ‘future shifted’ cards – cards that were being ‘reprinted’ from a set that was going to happen in the future, so they reflected that future, and could be used as an insightful window into what Wizards were going to do one day. Some of these little glimpses of the future worked out really well – it was our first reference to planeswalker cards, which have become an important driver of the game for nearly thirteen years now; it was when we first saw deathtouch and reach keyworded on Thornweald Archer, which was essential to fixing those mechanics’ impact in the rules. It’s also the source of Delve, a mechanic that got to be Dredge-level broken!

The set is full of cards that were made as mechanical exercises, a sort of set of popped wheelies and almost a kind of shotgun-style mechanical testing, where Wizards made bunches of cards they weren’t sure about, and figured they’d explore later. It was one of the most mechanically dense sets ever made: It has more keywords than any other set, and most of those keywords exist on one card.

Each keyword implies a possible future, each card with a keyword a place the game, hypothetically, was going to get to. Some of those futures have been snuffed out – eat it, Quagnoth – and some have been satisfied in the most ridiculous of ways – the infamous Steamflogger Boss. There are even some of these cards that have only ever been reprinted in dedicated reprint sets like 10th Edition, which implies those cards never had a ‘natural’ place in the timeline, only ever coming back from the future so they could be replicated in what was to them the past. Mass of Ghouls is one, for example, and a little more scarily, Tarmogoyf is another. I actually really like it in the Goyf’s case: it’s a creature so dangerous it ate its way into reality from outside causal time.

Still, there are some that come up a lot when Mark Rosewater talks to the public, and one of them is Muraganda. Muraganda has been referenced twice in Magic: once in a Planechase plane (hey, did you know Planechase was a thing?) and once on a Future Sight card, Muraganda Petroglyphs. 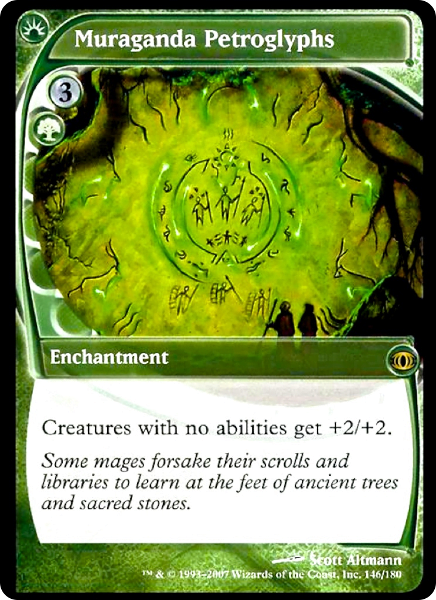 For some reason, there are people who really like Muraganda, who really want to visit it, and custom magic players seem to really want to design something in this space. I actually think a whole Muraganda set represents a potential problem, but see, the thing is, I’ve had a long standing opinion about Muraganda, and about the card these Petroglyphs are signalling.

Anyway, the thing is, I don’t think Muraganda is about vanilla creatures. I think Muraganda Petroglyphs is a capstone on a small number of cards with linked mechanics, something that’s meant to improve all of them, because back when this card was standard legal, I used to use it to improve saproling tokens, then got embarrassed when they died to my opponent’s saproling tokens.

The idea, in my mind was that the focus for this card should be the term petroglyph, rather than Muraganda; that Muraganda was the name of the plane, and petroglyphs are ancient runes, old enough to have been turned from wood to stone. The Muraganda petroglyphs are the petroglyphs that react to the others, the centre of their leylines – and the rest of the petroglyphs are a small number of cards that give you creatures that build together. It’s like slivers, but in a way that doesn’t grant keywords. 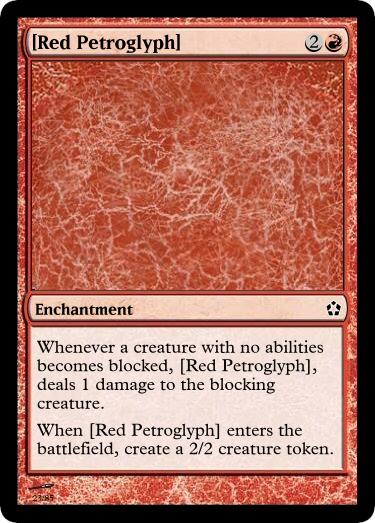 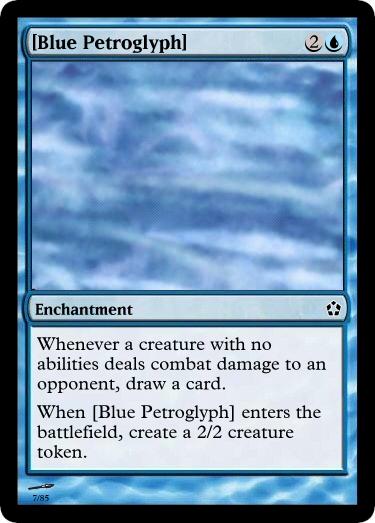 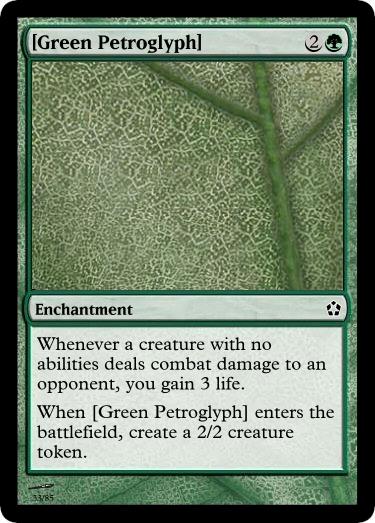 These are just examples of the design, and it’s worth remembering that I did this once before: I showed my thinking on how Contraptions would work (and I was totally wrong, even if I was right about some things). It’s worth doing this, writing down your thoughts and your ideas, and in this case, it’s an idea I’ve had for nearly ten years, so i figure I should be honest about that. This particular idea, of enchantments that care about and create vanilla creatures, seems to me to be a fun design space, but I have no idea how practical it is to explore it. Are there five good cards in this? Are there ten? It seems to me as much as the petroglyphs are old and important, for there to be a lot of them seems like a failure of flavour.