Hey, I got curious about this idea, why not tell you about it. 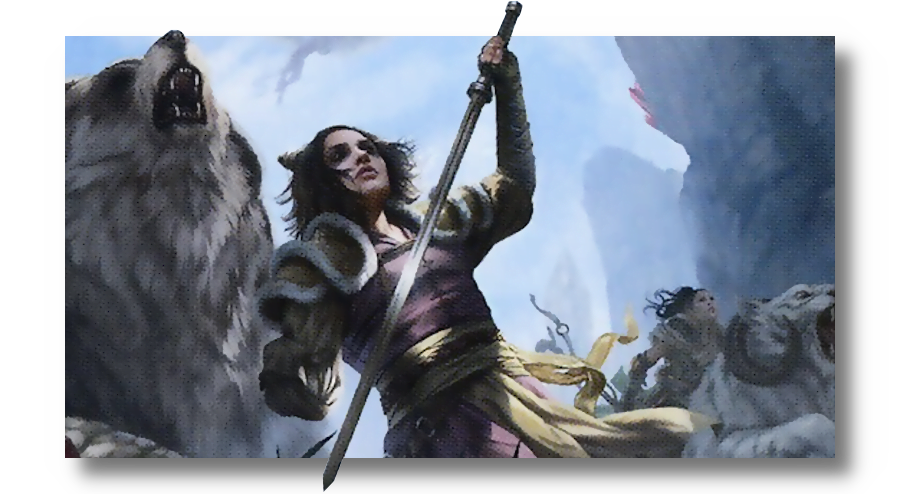 Check out this badass lady with one arm, a big heart, and a need to murderlate Poachers in the world of Ikoria. Her name is Winota, and she’s represented by the card Winota, Joiner of Forces. 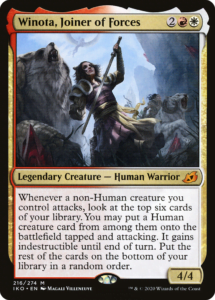 This is an exciting card. She does something on the turn she arrives, she makes creatures hit the board, and she presents an interesting challenge for your deck. You need humans she can find in your deck, but you need non-humans she can watch attack, and then your deck needs to find a way to get Winota onto the battlefield.

In a standard deck, I think the best direction is to just curve out. In a standard attack on turn four, assuming no mulligans, you have drawn ten cards, and made three non-Winota creatures and four land drops. If you attack like that, Winota’s ability fires and you look at the top eighteen cards of your library to get any hits you need. In that case, you’re looking at 18/50 cards – like, almost half your deck. Hypothetically, if you untap to do it again, you’re firing off another attack with another three non-humans that gets you another 18/46, which is half your deck, and you know what the other half is. The reach for a Winota deck in standard therefore is much more about a mix of creatures – human and non-human.

Buuuut that’s if you intend to attack once, and win the game.

… But I don’t wanna do that. I want to play Winota in Commander.

I want to Winota, vomit an enormous pile of creatures onto the battlefield, those creatures to maybe kill or immensely wound an opponent, and then to reload after the non-dead opponents at the table blow up the board and get in again. Conventional Winota is a shotgun blast, but I want to build her like an AR, reliable and reloadable.

How then to maximise the number of humans that drop when Winota is there for an attack? Easy: Make sure as much of my deck is humans as possible.

But the thought goes immediately, how do you make Winota fire if your deck is mostly humans? You need some nonhumans to get the engine going. And that’s right. And we will: Because there’s an enormous number of human creature cards that create tokens that aren’t humans.

Our deck then wants to be composed of six basic things:

Each of these categories will want to have at least eight creatures. Eight in each category, with an extra eight slots to fill out the creatures.

There are lots of options here. There’s a lot of artifact creatures in this space, too, but I tried to not go too hard on an artifact subtheme. Also I wanted to avoid picks that need something else to also be good. The mana curve here is a bit bulky, but it’s worth remembering that the cheap ones enable free big ones. Getting free humans is cool – but remember, you’re largely just doing this to get lots of bodies, and hopefully able to make those bodies better.

Note that anything that creates a token tapped and attacking is a no-show unless I can expect the token to survive. Tilonalli’s Summoner could be, on her own, a one-creature Winota reload, but the tokens don’t trigger Winota, because they never attacked, they just were always attacking.

Humans That Are Great To Get

I’m not super wild about Adriana because she doesn’t do anything the turn she comes down, but the turn after that, in a wide deck, she can give creatures +3/+3 or so, depending on the state of the game. I also want to avoid going too silly with this because I don’t want to have a hand of stranded human cards like the Marauders. They’re great because with the right other hits, they can just kill someone, but that’s a bit Christmas Land.

Nonhumans That Can Attack Safely

Look, relying on token generation is an option and I have no problem with it, but I also want to make sure that this deck can get Winota-senpai to notice them with only the investment of one or two cards. When Winota’s commander tax is 2, being able to Belfry Spirit into Winota and then serve for three attempts at extra friends seems really cool to me.

Also, Prava deserves special mention because in this deck, +1/+4 to tokens is basically ‘my tokens are invulnerable.’

Mana acceleration in Boros colours tends to be best focused around artifacts. Some of these are remarkably expensive, and they are expensive, because they’re really good. Mana Crypt, for example, is a really good card, but it’s expensive and I don’t have one, so I don’t build with one. Arcane Signet was pretty pricey, but the price has plummeted, but not so much that I’m going to bother going and getting one for this exercise.

That said, here’s the list of eight ‘accelerators’ I have for this deck:

I like when my colourless sources provide two colours of coloured mana. I also like the caravan as a way to avoid wraths and get another Winota fire the turn she comes down, since she can crew it immediately.

This is important. This Winota deck doesn’t want to just crumple when it’s wrathed. Rather than invest in one-time ‘no wraths for you’ effects like Unbreakable Formation, I’d much rather build for the idea that I will get wrathed, lose all my board, and have to find a way to redeploy a large number of creatures in anticipation of putting down Winota again.

One of the cards in this space that I definitely want is Martial Coup. If Winota dies the first time, I won’t be able to drop her again until I hit six mana. In that case, being able to Coup on one turn, wipe other people’s boards, give myself five soldiers, then untap, drop Winota and get five Winota attacks seems really good to me.

Lands that can create tokens? Also good. Planeswalkers can be good in this space too, for providing multiple tokens and multiple cards’ worth of value without requiring multiple draws. I don’t want to use Basri if I can help it, because he’s a cop, but he is really good.

The point is that you mostly have to rely on your specific draws to get new cards, and Wintoa will get you cards as long as you can keep hitting your land drops and keep reflooding the board with non-human tokens.

And… that’s a deck. That’s all those parts put together, having looked at these, without concern for prices. Then, I’m going to look at the prices of this deck and make changes based on them. For example, I own a Plateau in digital, but I don’t think you should feel you need a Plateau IRL. This is always a place from which to start. Some cards – especially cards like Flawless Maneuver – are probably pricey because they’re from precons, but MTGO surprises me from time to time.

Here, then, is the decklist: