Wizards employees, please do not read any further. This will discuss custom card designs and while it should only feature some abstract examples, I understand you are not allowed to look at unsolicited card designs.

Custom card designs feature a host of oddball problems, weird habits that we get into and things we don’t consider because well, mostly, custom designers are lone creators without the force of design and development behind us. Hey, we’re only human and all. But we have these problems and sometimes I think it’s worthwhile considering them.

Here then, let’s consider: Does your card create a Pack Rat Problem?

First, some basic premises: One of the most common places you see custom cards actually used is in cubes or commander. In both of those circumstances, you’re talking about high-variance environments. Second, every type of play is valid, but for the purpose of this, we’re assuming we’re talking about play environments that are at least a bit similar to limited and commander play you can see right now, and not super-competitive formats.

The Pack Rat Problem is, well, first of all, let’s look at Pack Rat. 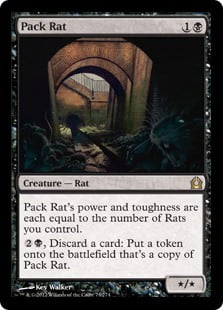 Pack Rat is a good, nay, great card. It’s really cool as an enabler, it interacts with interesting mechanics like Devotion and Madness, and it’s also a single threat that, once on the table, can ignore most of what you’re opponent’s doing to just spread and swarm the board.

And therein lies the problem.

The issue with Pack Rat is that, bereft of other factors, it makes every single turn that follows it pretty much the same. Whatever you draw off the top of your library has to compare to giving all your rats +1/+1 and not being counterable. Pack Rat strategy can basically boil down to making rats every turn until you hit 6 mana, then finishing up emptying your hand to make rats. In the words of Loading Ready Run, ‘this is my life now.’ 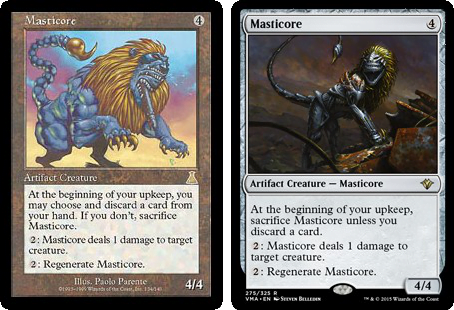 Another comparison is Masticore – Masticore is a little more of a lock-up for it, but when you drop a Masticore, Masticore is going to be your game plan for the rest of the game, until someone else changes it by getting rid of your Masticore – somehow.

What you want to look out for is when your design, for cube or commander, makes every turn pretty much identical. You want to avoid cards that take the unreliability of Magic: the Gathering and melts it away, avoiding null variance cards.

The issue isn’t that identical turns is an inherent evil. After all, several Prison players actively like being able to force the game that tends toward variance into consistancy. That’s what their plan is to do, and the best ways to do it is to deprive people of resources and their ability to engage with the game itself. But there’s a world of difference between a prison deck and a null variance card. Null variance cards mean that every single card you could draw is less powerful, or less interesting, than just repeating the last turn. Better than some options? Great! Better than any option? Not a good idea.

The thing that makes this worse is commanders? Commanders are always-drawn cards. That means Commanders make the game more consistant by definition.

What this can do is create a kind of interesting, weird incentive. Consider this: 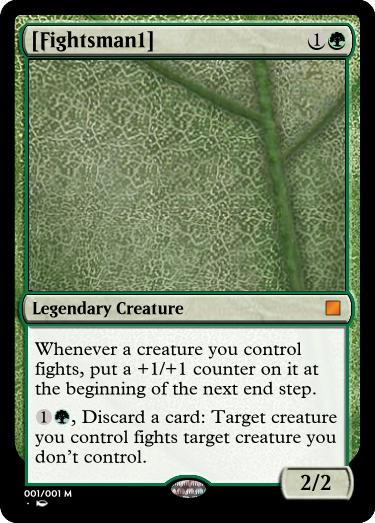 This commander can cast Pounce, which is a pretty cool spell. It has a reasonable fight-lord effect, and it’s pretty decent at it. But it’s also cheap enough that when it lands, the next turn is probably also fighting something, and then the incentive is there to push that further. And then you’re left with a strategy that’s probably going to mostly rest on this one, single card for the rest of the game. Plus, because it’s a commander, you’ll get to see it every single game, coming down consistantly on turn two.

Is there an easy fix for it? Ironically, by making the ability better you can make it so spending a whole turn to use it is a bigger investment, but make the reward similarly impressive. 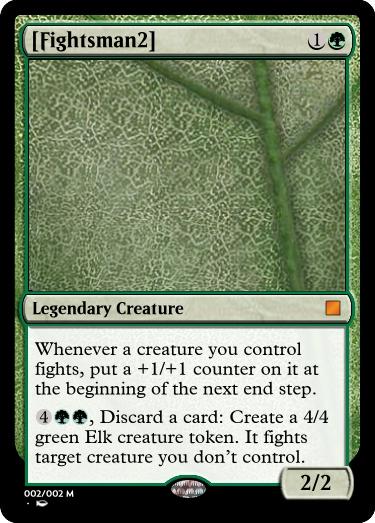 This means that the ability doesn’t happen all that often, but the result you get out of it is bigger, and can leave behind a thing that will win you the game – so once you start repeating the effect, the game ends reasonably quick. You can still play the commander early, still get some effect with it with other cards, but you’re not expecting the second and third turns of the game to act the same. It’s less incremental.

Is it bad to have repeatable, utility effects on Commanders? Not at all! But when a commander creates a single, consistant strategy, every time, the game gets boring fast. Be careful of that kind of problem when you make your cards, and you’ll make better cards for better play.