Hello, Wizards employees! I understand that you’re not supposed to see unsolicited card designs or conversations about same, and with that in mind I’m going to ask you to head elsewhere. Like to this rad interview with Alison Lurhs about Tumblr and MTG. As for the rest of you, let’s talk about making an Anti-Legions.

Man, that’s frustrating. I can’t help but feel this kind of article – if it’s good – would be great to show as a portfolio of design work. Ah well.


Legions, A Bit Of A Problem

For those of you who don’t remember it, Legions was the second set in the Onslaught block, the first major tribal block, and the block that introduced us to Morph. There were, to say the least, problems with Magic: The Gathering at this point, but within the framework, even then, Legions was weird.

Legions was the first – and only – set that featured literally only cards with the card type creature.

If you were curious about the impact on draft, the conventional wisdom was that you could spend time on picking up utility effects in Onslaught because every single draft would give you, at minimum, 15 creatures, and some of them were off-colour morphs. In order to ensure there were some spell effects in the game, creatures had enter-the-battlefield triggers and morph flip trigger effects.

Yet, despite this, Legions was a… problem of a set. Partly because every single spell effect was costed on creatures that were also costed as if they were also a spell, and a lot of those creatures were, well, bad? It’s not just a matter of a format which was generally bad, it was a set full of cards made primarily for limited play, focused on creature combat with a benchmark of a morph, and just a touch too many tribal effects.

Legions was bad. And it had a gimmick. And because this is the internet, time to time, watching Mark Rosewater’s blog, you will see someone ask, why can’t we have an anti-Legions, a set without any creatures?

The simple answer is that Legions is bad and its inverse would be worse, but let’s, for now, set aside that fact and proceed as if this terrible idea isn’t exactly what I just said.

Here’s the problem: Creatures and creature combat are the sinew and mesh of the game. Permanents mean that investments made in one turn can have an effect later, and that means there’s a pre-build mechanism in the game for the game to get shorter as it goes on. If it’s just spell/counter effect it tends to push the colours into being very similar, too – green starts to behave a lot like Bad Red, and black loses a big chunk of its ability to interact with permanents.

It sort of goes without saying, but creatures matter and the idea that they don’t is stupid. There, I said it. Look at how many mechanics are dedicated to just the interplay of creatures, how many keywords exist that are just about creature combat. There’s a lot of space for creatures, and lots of colours have ways to interact with them. Interacting with spells… less so. 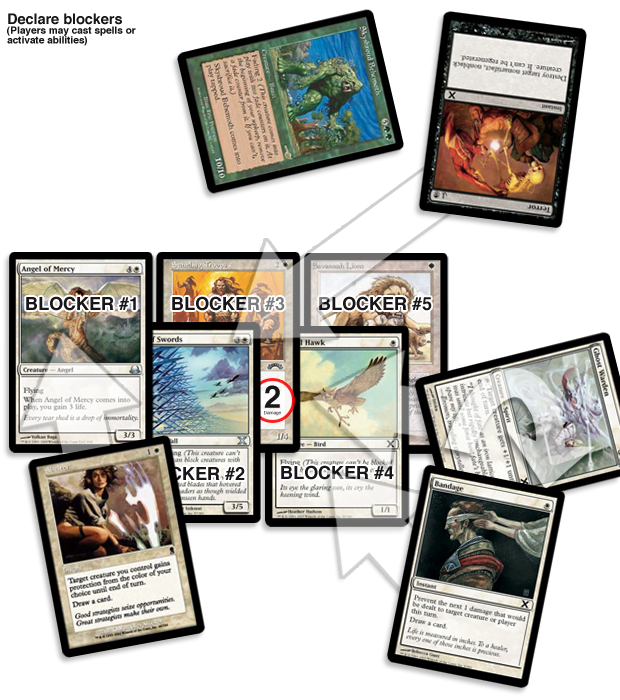 Part of this is because there is only a very limited sphere of ways to interact with a spell, because spells can already do a lot. You can design a spell that says something like ‘the next two spells to deal damage to you this turn deal 1 less damage’ but what about loss of life? And even then, you’re just interacting with one specific type of spells.

If spells have to do all the work of the game, they get pulled towards a narrower band of effects, so that they have a lexicon, a library, of possible options they can interact with. That is: Spells start to fill the role of creatures – and mostly, the kinda boring ones.

What this means is to do a creature-free set, you probably don’t want to do it as completely eschewing the battlefield and the things that creatures can do.

Which is: If the set wants to avoid printing cards of the type creature, you still need to include cards that make creatures. 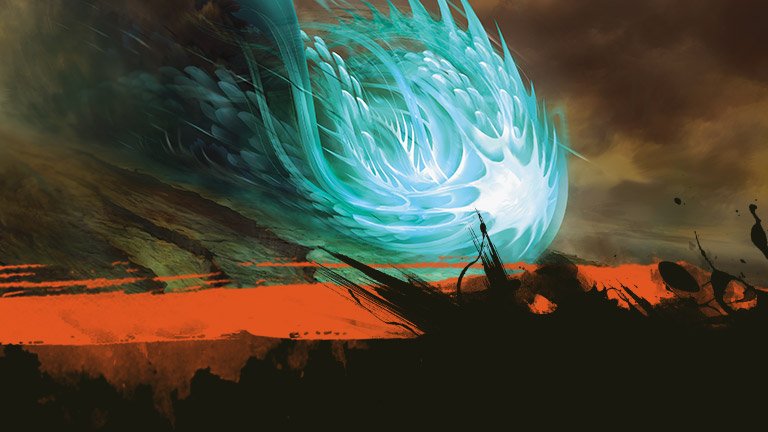 What this means is that instead of treating this set like you’ve suddenly opened this huge amount of design space for more, interesting, wicked spells from every colour (you monster), you’re just going to be dedicating the creature slots to Creature Like slots. The good news is there are three well-established ways to do this:

The first is easy. We have plenty of those. Yet at the same time you’re going to have to keep some details in mind when it comes to tokens. There’s a bunch of stuff with tokens because they ultimately have to occupy memory space for players:

Now, it’s not like this forces creature combat into being completely boring. After all, there are cards that create tokens and still interact with those tokens –  you can look at Sarcomancy or Lilliana’s Mastery for examples. This lets you create permanents that create tokens – both regularly and as one-off effects.

The second has two best examples: Manifest and Morph. Morph lets you choose to replace any sorcery or instant you have with a spell, but crucially, Morph gets very weird about turning a face-down sorcery up. Sorceries have a chunk of rules that say they cannot exist on the battlefield, so if you do this you have to come up with mechanics for handling that, and players are going to handle those with different levels of intuitive reaction.

Manifest is a bit cleaner; particularly, Manifest doesn’t have a fixed price and it’s a game action: you can have a spell like, say, this Manifest Shock (I told you not to read this WotC employees!) 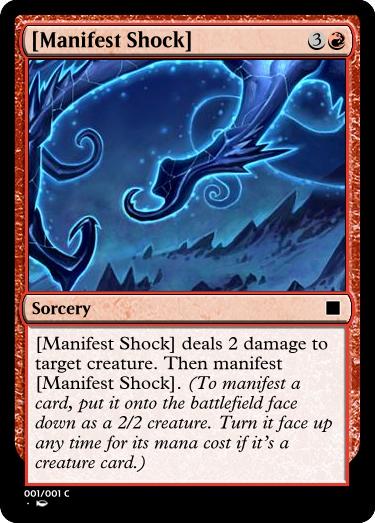 This works, and it also lets you do things like make flashback/graveyard-active spells that manifest themselves and now you’re presented with a challenge of trying to get the 2/2 killed before it becomes available again.

Meanwhile, this would be a possible set for something like Muraganda Petroglyphs. Thing is, when you do that, you’re now encountering a pinch on your design space. Players are going to assume all the enchantments, artifacts or lands they can play that change the way their creature tokens and manifests all work, and that means a card that says ‘Creatures you control have Trample’ turns off the Petroglyphs, unlike a card that says ‘creatures you control can assign their combat damage as if they weren’t blocked.’

All of this seems, to me, to pull the idea of the Anti-Legions into the theme of the past. Specifically, pulling to an ancient magic. 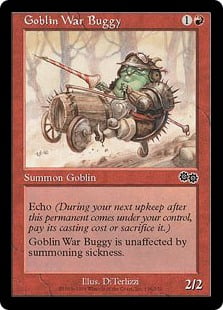 Check out Goblin War Buggy. See how the card says summon, rather than Creature? There’s an established idea that in Magic: The Gathering our technology for summoning creatures has gotten more and more refined.

We’re already running long, so here’s the final thing I’d bring up: Legions’ idea couldn’t support an entire big set. It could barely support a small set. With that in mind, for your Anti-Legions set? I’d recommend going no bigger than a set like Coldsnap.

If you want more of a guide on how to do a design skeleton, thankfully, Mark Rosewater has done that.