Magic: The Gathering is a game with a long and storied history in a player base populated mostly by people who seem to be drawn to this game so they can tell other people how to do things better. During the history of Standard, there have been four major rounds of bannings, and, until this most recent I had this personal hypothesis about the impacts of these and what they told R&D about the way the game worked.

Round 0: THE DARK TIMES 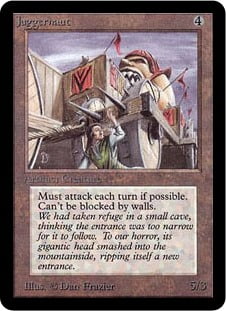 I’m not going to lie to you, I barely understand early bannings. Things were the wild dang west. There was a format where ten cards from alpha, the original duals, were made legal, but only them. I don’t know this period well. Moving on. 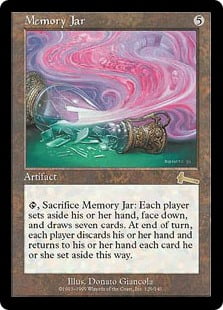 Randy Buehler gives a fantastic rundown of the decks of this first great era of standard bannings, the time when Standard was A Thing long enough that bannings were themselves, A Thing. This period was known as Combo Winter, which was not the same thing as Black Summer or the Era Of Fruity Pebbles or the like. The impact of Urza’s Block and to a lesser extent, Tempest, on the various other formats like Extended was huge and all, but this is about Standard.

Standard having an era of Combo is noteworthy because combo is kind of one of the easiest things to develop against. Combo decks want to interact as minimally as possible, and if you can just have the time to grind through permutations or tested versions of decks you can head them off. You don’t make combo looking for your opponent to do a thing, you make combo looking for your opponent to not do things.

These three events, by the way, are compared to one another, but it needs to be said and re-said: None of the other eras were as bad as Combo Winter. Combo Winter was a period where you could actually lose on the first turn, or where you could functionally lose on the first turn. Combo Winter was when Wizards banned a card as an emergency. The closest we got to that ever since is when Mind’s Desire was restricted in Vintage before it was ever legal.

Round 2: The Year Of Aggro 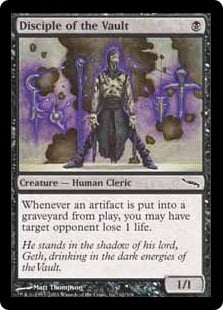 Fast forward to Onslaught-Legions-Scourge Mirrodin-Darksteel Standard for the next bannings. Then Skullclamp got axed. Despite that, what followed along with that was a full year of Affinity aggro being the most widely played powerhouse deck in Standard. There’s some argument that Sarnia Affinity, a build popularised by Geordie Tait, was the best affinity deck pre-Darksteel, because it was basically a permission deck that just played double-lands until it could vomit a Broodstar  into your face, but it didn’t matter too much because Affinity aggro decks were good enough that ‘best’ was meaningless. Best builds of Affinity were negotiating winning the game on turn 2.3 as opposed to 2.4, so it didn’t really matter who was ‘best.’

This period is notable because Onslaught Goblins were also running around so you couldn’t even double down hard on your Affinity strategy. Kamigawa wasn’t going to help any either, because by that point the game had bled a lot of player base. Affinity decks were made mostly of commons and extremely expensive rares, meaning they weren’t a bad place to jump into this very awful tournament format, too! Affinity had power but it also had reach, and flexibility and resilience.

Aggro is harder to balance for than combo. It wants to interact. Blockers can gum up the ground. It fails to mass removal without resilience. It’s harder to be sure you haven’t done something like this.

Weirdly, Wizards have actually printed a bunch of much stronger creatures than were being printed back then, and relaxed on global control – but the relaxation of global control has made it so aggro decks are a little more prone to have to deal with blockers, and therefore, aggro decks don’t have to be so utterly cutthroat as they did back then to deal with things like Astral Slide. 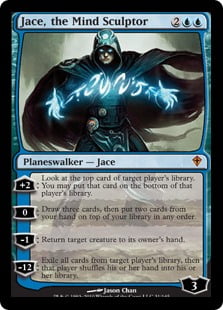 Cawblade is an interesting thing it is was the first truly oppressive control singular deck that deformed a standard environment. When there were 4-5 permission decks that could shut the game down and keep the environment miserable for all the things people tended to want to do, single decks like that didn’t stand out.

The issue of Cawblade wasn’t instantaneous loss of power. It wasn’t that it was capable of snapping the game out without you ever having a chance to do anything: It was that it was a control deck that could play like a prison, that could just answer everything, that was so powerful and had so many good options for answering anything.

Cawblade was not a deck that won fast. It was just a deck that didn’t lose and took forever to do it. And as a control deck, it was the hardest to hit with bannings. 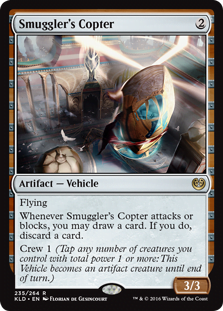 Hey, Standard’s been weird hasn’t it! It’s had a bunch of bannings! But at the same time, the bannings have been about disabling a number of decks, which is pretty weird. Particularly, Smuggler’s Copter was the most obvious one – it was nuked just for being everywhere and going in every deck.

I’m not going to restate things Wizards have said about these rounds of bannings. They’ve been in aid of diversity of the format, of making some cards good enough to play, but most interestingly to me, the decks they’ve hit have been mostly different types. There’s been a combo deck, a control deck with a potentially explosive win condition, a midrange tribal deck, and a control powerhouse finisher that was being played in a lot of decks.

None of these are good things to have to hit. Standard got bannings because Standard had problems.

But oh my god they are problems of a totally different scale as the ones in the past.

This represents an interesting set of ways to view balance, to view ways of balancing. First, make sure no player can do too much on their own. Then, make sure player interactions don’t pressure players into the fastest iteration, and your design isn’t being pushed to force players to go too fast for there to be any meaningful responses. Then, ensure that the game isn’t built to allow for too many useful responses, solutions to problems.