Back when I started playing Magic: The Gathering, Magic was standing on a pair of thresholds. First, we were in the conclusion of the first major Magic storyline that had nothing to do with The Weatherlight in years – Odyssey and Onslaught. Second, we were just about to begin the long journey from Onslaught into the undiscovered wilds of Mirrodin.

Since at the time, the Magic story was new to me, I went out and looked for it. What I found was, honestly, pretty bad. The older Weatherlight story presented Gerrard as the most generically dull Good Guy. The Weatherlight crew were, mostly, pretty boring and simple cutouts. I can’t remember a meaningful quote from any of them. Nothing about them impressed upon me, except that the story was very, very eager to present that Gerrard was important and mattered.

There is one moment in that history, in the story before Apocalypse that means anything to me: 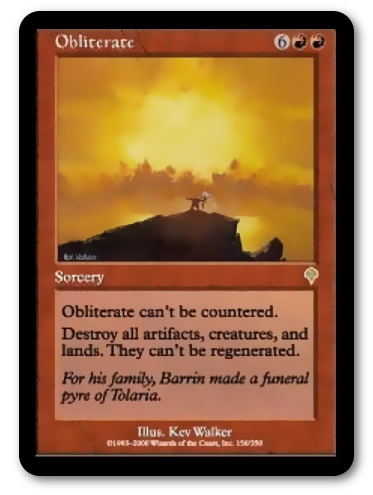 The thing about this card that always made it echo to me, of the past of Dominaria, is that I knew Barrin because of cards like Rewind or Relearn or Catalog – cards that were blue, and thoughtful and often fairly cost effective. To see that name, a name I associated with care and consideration associated with this – and with the death of one of the most powerful-seeming places in all of Magic? It was astonishing.

But then we had the story of Chainer and Kamahl, which is a story told in the wake of the end of the Weatherlight, now far removed from the Weatherlight’s problems, and is mostly a story of boys who can’t communicate meaningfully and the women that suffer because of them. It was learning about legends and a war and the world collapsing and all of it was done in pursuit of a powerful object that tore up the world, and then… at the end, with the disappointment that was Karona and her story, we left.

We left for Mirrodin.

Which was messed up because of Karn, a member of the Weatherlight, about whom I did not care. But it wasn’t so bad. The novels weren’t that good and I didn’t care, but at least, I reflected, we were moving away from the years-long saga of Gerrard Capashen, About Whom I Still Don’t Care.

Kamigawa happened, then Ravnica happened, and they were interesting and new and took the story in directions I wanted to see more of.

And then, finally, after years away, we finally had a Triumphant RETURN TO DOMINARIA in the form of Time Spiral block, a block of Magic so bad that it was about then I decided to stop writing about it. Up to that point I had seldom found a Magic set that was so intensely interested in smelling its own farts as Time Spiral. Nostalgia, it crowed, Nostalgia it purred, after 8th edition had made a show of being The Set That Drew From All Of Magic’s History, and the fuss of Power 9th (which was a hoax). We got Time Spiral, which wanted to bring us back to a simpler time when you could open a booster you spent money on and get a Squire, or blue got burn and –

I didn’t like Time Spiral much. I said as much at the time.

When the announcement was made that we were returning to Dominaria — FOR THE SECOND TIME — I wasn’t awash with the nostalgia that everyone else seemed to be. I think part of that is that the older period, the actual Weatherlight era of the Weatherlight story, was never something that resonated with me.

First things first, I know I have an emotional hype deficiency. I’m not That Guy. I don’t get frothingly eager about new sets.

I thought Ixalan looked cool going in to the spoiler season but didn’t find it interesting enough to play much of after one deeply depressing prerelease (0-3-bye). Dinosaurs are cool, Merfolk are cool, but the urge to get involved and play Standard at the time just wasn’t there. My interest in Kaladesh and Aether Revolt standard was pretty strong, as a casual player, and a Commander player, as with Innistrad – but it seems to me that I just don’t see the kind of things I like doing in sets. I hope Deeproot Champion gets a home, for example.

But Dominaria comes out tomorrow. It is burgeoning and it is fullsome and by now – when it goes up, not when I’m writing it – the whole spoiler will have come out. It will be full of references to the history of Magic, and mechanics that remind you what Magic used to be like in the era of Armageddons and Counterspell, and it will try to mulligan on many bad decisions made in the past and introduce a host of Kamigawa-level uncommon legends and it will strive to be a set to love.

I am afraid, however, at the moment, as someone who does not like Dominaria, who does not see it as his home, who does not see the urge to go back as exciting, that this set, so far, is not thrilling me. I am not excited. I am not hopeful. This set has done nothing, so far, to convince me, someone who was glad to leave, that it’s good to be back. Which is fine – it’s not meant to. And as a person with my life, I am always going to have a different view of nostalgia for its own sake.

I watch my friends point at cards and excitedly turn over their meanings or their applications. I watch people crow about new printings as if it validates their position on old cards. I see old names attached to new characters who have a chance to be interesting, I see new stories being told with old pieces that maybe, maybe this time, I will find something to care about, even through my doubts. I see the work of people I respect to reinvigorate and restore something that was always broken and never whole. I see people explaining and re-explaining those old stories to one another, so happy, so happy to be able to point to those things that mean something to them, and see them made real anew. And that makes me happy.

I still find myself, ever yearning, to reach for whatever till there is, and look to the next horizon. Because Magic always changes, and Magic is always going somewhere. To me, that is exciting.

Hey, Modern you now have the entire Onslaught Goblins deck in you, choke on it. 😞