Time to time, Frank Karsten will release lists of combos that exist or have been made possibly by new additions to an environment. In Modern Horizons, he showed two that I really like: Vesperlark and Phantasmal Image allow for infinite sacrifices and so does Saffi Eriksdotter and Renegade Rallier.  He forwarded the Saffi/Rallier combo with Altar of Dementia, as a sacrifice outlet that immediately eats your opponent’s whole library. 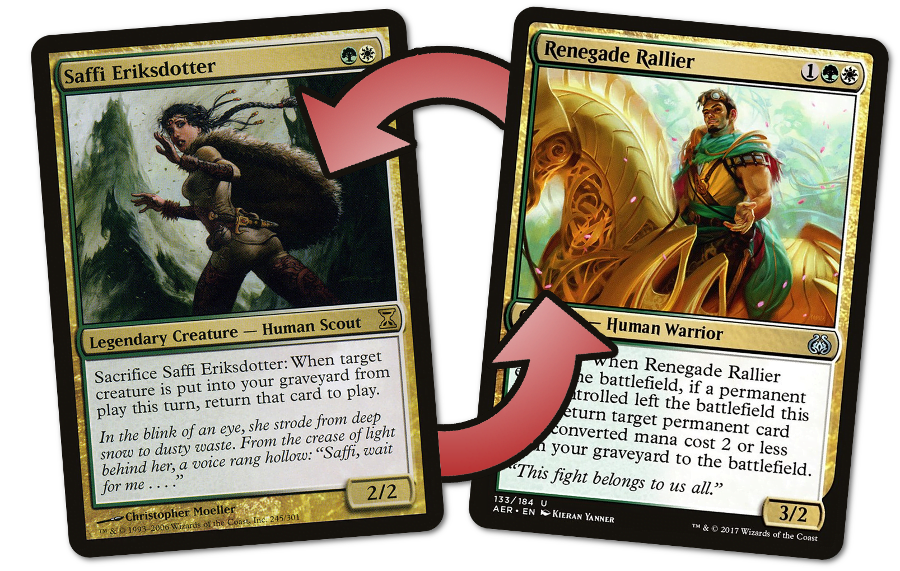 It’s that latter one is really interesting to me because it’s in the same colours, all the cards in question are pretty aggressively costed, and they’re cheap to play with.

What can we do with them?

Let’s break it down into three basic bits:

There are some combos that win the game on the spot and all you need to do is survive to drop them. This combo can get you most of the way but it’s a little awkward, and the best thing about it is that some of the cards are just generally good cards anyway meaning you’re not stuck with cards that do nothing while you’re digging for the last piece to make it work.

First, there’s that Saffi is a pretty decently solid creature body and she lets you trade her 2/2ness for your best creature on the battlefield when it’s about to die, and she can even start the loop she’s in while she’s in your graveyard. She can’t save a creature that’s had to grow, so stuff like Vinelasher Kudzu or Deeproot Champion aren’t good for it. But cards that make tokens, or draw cards, or maybe are just bigger than the 2/2, they’re probably good. Saffi therefore wants creatures that are better than her, and probably benefit from returning to the battlefield.

The Rallier can also just randomly gain value post-combat by entering the battlefield as a 3/2 and bring the best 2 drop out of my bin. The Rallier works well with lands that sacrifice, like Horizon Canopy and Windswept Heath. There are some eggs that aren’t bad combos with the Rallier, but they aren’t that great either. Things that mana-free jump in the bin work with the Rallier.

The Altar, formerly high value because of its interaction with Hogaak, doesn’t really do much that most creature board strategies go for except for being a sacrifice outlet, so it doesn’t really have a lot of ways to earn value.

It is worth noting that Rallier and Saffi are human, and green and white have some human synergy cards.

Can anything replace any of these bits? Well, that’s part of it: Every one of these pieces can be replaced. Saffi can be replaced by Kaya’s Ghostform, the Rallier by Sun Titan and the Altar by Blasting Station.

Kaya’s Ghostform pushes us into a third colour, but it is quite cheap; the cheapest version of this combo is Rallier, Ghostform and Altar, which can be done entirely on Turn 3. Not wild about that. Sun Titan is huge and expensive, both in mana and tix – there’s definitely a deck shape there with cards like Sakura Tribe Elder and maybe Wrath of God, but if you’re making a control deck you probably don’t need the combo finish. The allure of  combo is attacking from an odd axis.

If we add other colours we don’t actually expand our options much. The best option to add is probably black, which can add in cards that benefit from sacrifice loops and can partake in them – particularly Carrion Feeder, Zulaport Cutthroat, Blood Artist and Viscera Seer, cards that are cheap and work well with this structure and now we’re making Abzan Aristocrats (which I’m not against). If all your combo cards are creatures, green can tutor them up with cards like Fauna Shaman and Chord of Calling, so that’s desireable.

I wanted to cover blue and red’s addition to this deck idea but there isn’t really one.

Scott Forks-Us and Takes It On The Chin

Okay, so that’s our exploration. What kind of decks are we trying to make? The way I see it, here are three options for this combo:

Are any of these good? Well, I’ve tried a few of them out. Some were really bad ideas – I made a Wall deck that used all the cantripping walls I could find, just to dig to the Saffi and Rallier. I couldn’t bring myself to pay for the Collected Companies, since I prefer for my modern decks to be built around a small number of valuable cards (and right now, those valuable cards are lands). I didn’t build with fetchlands (which would have massively improved the Rallier), but I did wind up on this:

I 👏 love 👏 this 👏 deck! It’s got a lot of cards I already liked, and it handles enemy mass removal the way I love, which is, <Laughs in Zulaport Cutthroat>. It can beat down with just a chain of one-drop two-drop three-drop. It is really disruption light, but there’s options, it can add in Kitesail Freebooters in that build, probably for the Mayors of Avabruck. It’s not as explosive as a Collected Company version of the same idea.

I also really like the Mayor! It’s not just that he’s a human lord, it’s that he’s a really good topdeck in the late game, where if the game has been wiped repeatedly, drawing just the mayor is a one-card engine that you can sit behind and let it take over the game while everyone’s exhausted. And it costs two!

It’s pretty neat! Sleeve it up and have a go!